Heiko Bleher takes a look at freshwater Potamotrygon stingrays, including information on buying and keeping them in the aquarium.

Freshwater dwellers, they live all their lives in such environments, but some also enter brackish waters and a few even reach marine habitats.

Distribution is restricted to northern, central and eastern South America in rivers and lakes which drain into the Caribbean, where I found species in brackish and marine habitats, and into the Atlantic as far south as the Río de la Plata in Argentina.

At least three distinct species are found in some rivers — in addition to different populations and possibly undescribed species. Some are endemic to a single river basin. 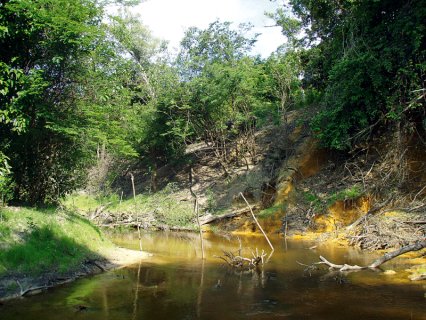 I found potamotrygonids in almost every river and lake area in the Amazon basin — where there’s the greatest diversity — all the way to the upper Amazon in Bolivia, Peru, Colombia and Ecuador. They are also widespread throughout the Orinoco basin, besides the Guyanas. 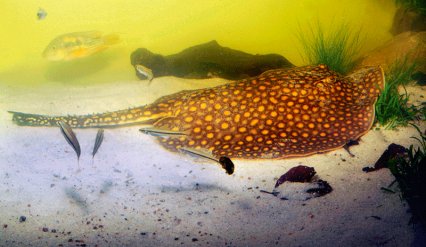 Potamotrygonids are almost circular — except for the genus Paratrygon and an undescribed genus — and range from Potamotrygon schuhmacheri, which reaches 25cm/10” in diameter, to the Short-tailed river stingray, P. brachyura (above), from Paraguay, Argentina and Uruguay which can grow to 1.5m/4.9’ in disc width. One such specimen was collected in the Uruguay river in 1934 at 120 kg/265 lb.

The largest specimen I have collected was a Discus ray, Paratrygon aiereba, almost 1.2m/3.9’ in disc width and about 50 kg/110 lb in weight, but I saw larger ones.

The upper surfaces of river stingrays are covered with denticles — sharp tooth-like structures — and although close relatives of sharks, they have a completely different feeding manner.

They feast mainly on shrimps, fish, crabs and molluscs, but instead of ripping and tearing they suck the prey in and crush it against their hard toothplates, as they have no real teeth.

Most species are brown, grey or yellow and often have spotted or mottled patterns. Only P. henlei and P. leopoldi are black, or largely blackish with white spots.

All species have one or two venomous caudal stings. However, they are not dangerous unless stepped on or threatened.

River stingrays are usually docile and curious and I have had several species as pets. They came to the front of their aquarium when I went close and ate out of my hand. They loved to be petted too.

However this is not a feeding relationship I’d suggest a novice fishkeeper to try to foster.

Reproduction is known as matrotrophic viviparity. Villi (umbilical filaments) are formed that nourish the foetuses while in the uterus and the reproductive cycle coincides with hydrological changes in the ray’s environment.

Gestation can last between three to 12 months, with one to eight embryos in gestation at one time. I have a friend in Russia whose potamotrygonids produce over 400 young every year and he had 12 babies at one time. There’s also a report of a litter of up to 21 foetuses from one Potamotrygon motoro female.

Up to three smaller litters can be produced during one year and there could be a break of one or more years before the next. Litter size and reproductive periods may differ between species in captivity and wild ones and can depend on size and age of the female.

The longest productive period of one female has been recorded at more than 15 years, but this also depends on the males. I have seen a single male in a tank so active that he took every single female he came across and fertilised it — as well as females from other species.

Naturally this should be avoided to prevent hybridisation, although this is common practice now in Taiwan, Malaysia, Indonesia, Singapore and China. 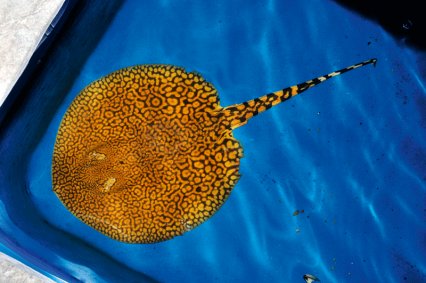 Captive reproduction of river stingrays only started seriously in the late 1990s and worldwide only during the last ten years or so, as for some years Brazil prohibited their capture and trade.

The greatest threat potamotrygonids face is not removal and export by collectors. The real danger is increasing deforestation and destruction of natural habitats. One hundred hydroelectric dams are soon to be built or are nearing completion in the Brazilian Amazon basin alone.

Species ID is not easy

Some morphologically different species can display almost identical patterns and, to make identification even more difficult, there’s a degree of hybridisation among sympatric species.

Important characteristics that help overcome these problems include:

Markings on and shape of the tail are the best key to any species identification. 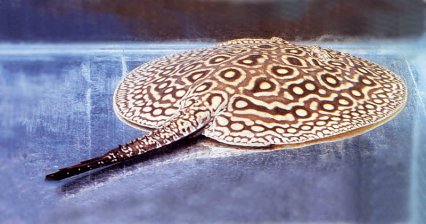 Stingrays breathe by drawing water through a small hole behind the eye and expelling it through gill slits on the underside of the disc.

That’s also why river stingrays prefer rivers with fine sand or mud. Areas with stony bottoms are only visited. During the rainy season they also move into flooded forests.

They spend some time buried under sand or mud with just their eyes protruding, so sand in any aquarium is a must.

Remember too that the more space you give them the more you will enjoy them. Stingrays in planted aquaria must have enough free-swimming space and, in addition to providing a sandy region, I suggest a planted area with low growing Echinodorus, a dwarf species looking like a lawn. They love to glide over it!

The lower the conductivity the better. In nature it is hardly above 50-75 µS/cm, but tank-bred rays are often used to 200 µS/cm and higher.

Introduce them slowly to your aquarium and keep it covered as, being night active, they may jump out early on.

If you have a good filter system and good flow give them 20-30% weekly water changes and feed well. If so, your rays will be easy to keep and much more interesting and educational than most TV shows! 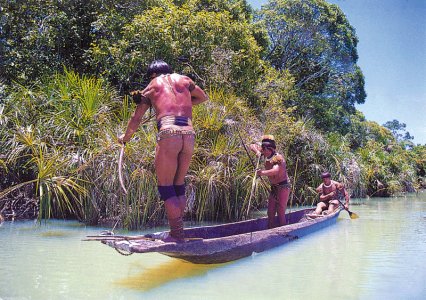 What should I do if I get stung by a ray?

Because they were originally bottom dwellers and had no defences, river stingrays had to adapt — evolving a sting or stout spines which have two venom-containing grooves in an integumentary sheath.

The tail is thrust into the victim, in humans usually in the foot or lower leg, producing a deep jagged laceration from the spine(s).

The stinger apparatus then injects a protein-based toxin, causing immediate excruciating pain. Injury may occur without envenomation because many stingrays lose or tear the sheath covering the venom glands.

Immerse the affected area in the hottest water tolerated or apply a heat pack. Heat rapidly decreases the pain, directly affecting the poison. I have lived among many indians and seen some bearing scars from stingray stings, but none had yet seen a doctor and no deaths have been reported.

Some victims use as ‘medicine’ the Amazonian liana called be`ju´co, which is a climbing woody vine. If cut it bleeds a beige liquid which, if applied to the wound, heals it fast.

> Look out for hybrids!

Beware hybrid stingrays, as many are now arriving from several parts of Asia.

Breeding farms have been set up in Malaysia, Singapore, Taiwan and Indonesia to produce thousands of mainly South American freshwater stingrays and the species are frequently mixed.

Why hybridise? Breed farmers want to produce as many as possible and/or they are unable to get males in numbers. Females are much more frequently found. 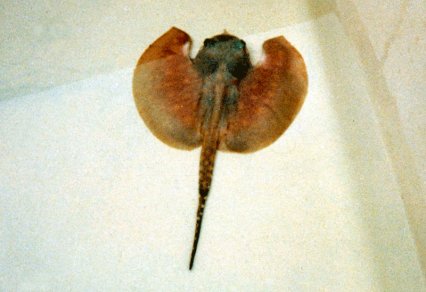 Do not got for mutant rays, such as the so-called Butterfly or Batman varieties.

Some of these unfortunates may have been cut as juveniles to look like a butterfly monster.

Do not buy a ray that looks very skinny. If you can see cartilage (rays don’t have bones) sticking out of some examples for sale it means that their stomachs have already dried and they will soon die.

What tank mates are best? 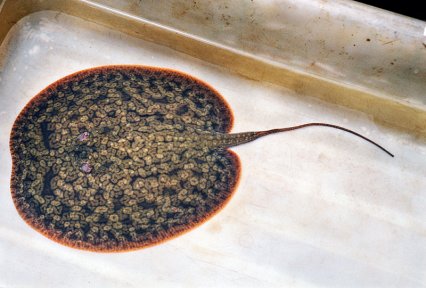 Paratrygon aiereba (Walbaum, 1792) pictured above: The Discus ray has a distribution in the Amazon and Orinoco river basins of Bolivia, Brazil, Ecuador, Peru and Venezuela.

I have found quite different colour patterns and shapes and possibly there’s more than one species in the genus.

Possibly the one from Venezuela should be the type. 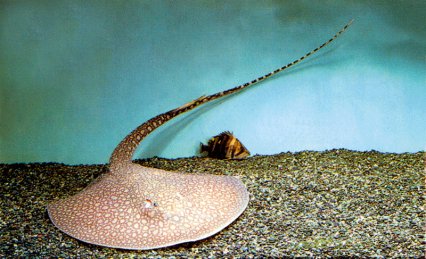 Plesiotrygon iwamae, Rosa, Castello and Thorson, 1987 (pictured above): This, the Long-tailed river stingray, is only known from the Rio Solimões, above Tefé,  in the Amazonas region of Brazil, up to the upper Amazon in Ecuador (Napo).

Potamotrygon boesemani, Rosa, de Carvalho and de Almeida Wanderley, 2008: Boeseman’s stingray is a recently described species and is only known from the Corantijn river drainage in Surinam.

Potamotrygon castexi, * Castello and Yagolkowski, 1969: The Vermiculate river stingray type is from the Río Paraná, at Rosario, Argentina, but some say it’s also found in the Upper Amazon river basin, which I doubt. It is restricted to the Paraná-Paraguay river basins in Argentina, Bolivia and Brazil.

Potamotrygon constellata (Vaillant, 1880): The Thorny river stingray holotype is from Calderón, Colombia, Upper Amazon, Brazil, where the first Symphysodon haraldi was found. Its distribution is given as the Amazon and Solimões river basins in Brazil and Colombia, and Peru.

Potamotrygon falkneri,* Castex and Maciel, 1963: The Large spot river stingray type is from the middle Río Paraná, Entre Ríos in Argentina and its distribution is limited to the Paraná-Paraguay river basin in Argentina, Brazil and Paraguay.

Potamotrygon henlei (Castelnau, 1855): The Bigtooth river stingray is only known from the Tocantins river basin, Brazil.

Potamotrygon hystrix* (Müller and Henle, 1841): The Porcupine river stingray is restricted to the Parana-Paraguay river basin in South America. Other records in the aquarium hobby are incorrect — or another species is involved.

Potamotrygon leopoldi, Castex and Castello, 1970: The White-blotched river stingray is unique and described from a creek on the right shore of Upper Rio Xingú, Mato Grosso, Brazil and is restricted to the Xingu river

Potamotrygon magdalenae (Duméril, 1865): The Magdalena river stingray is only known from the Magdalena and Atrato river basins, in Colombia.

Potamotrygon motoro (Müller and Henle, 1841): The Ocellate river stingray was collected by Natterer in the Cuiabá river in Brazil, and it is possibly the most widespread ray in South America. 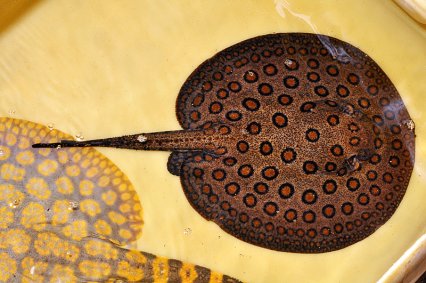 Potamotrygon ocellata (Engelhardt, 1912) pictured above: The Red-blotched river stingray is only known from Amapá in Pará, Brazil

Potamotrygon orbignyi (Castelnau, 1855): The Smooth back river stingray was the described (holotype) from the Rio Tocantins, Brazil, but is said to have a wide distribution in South America, certainly in the middle and lower Amazon basin.

Potamotrygon schroederi, Fernández-Yépez, 1958: The Rosette river stingray was described from the Río Apure, at mouth of Río Apurito, Estado Apure, Venezuela, and is found in the Orinoco basin. Some say it can also be found in the Amazon.

Potamotrygon schuhmacheri,* Castex, 1964: The Schuhmacher’s stingray’s type locality is the Río Colastiné Sur, Santa Fe region, Argentina, and it is restricted to the Paraná-Paraguay river basin in South America. 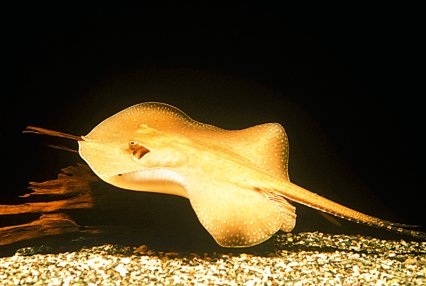 Potamotrygon scobina, Garman, 1913 (pictured above): The Raspy river stingray is from the Rio Tocantins, the holotype being collected near Cametá, Pará, Brazil.

Potamotrygon signata,* Garman, 1913: The Parnaiba river stingray was described from the Rio Puty, tributary of Rio Paranahyba, Parnahyba, San Gonçallo, Brazil, and is found only in the Paraná river basin, Brazil.

Potamotrygon yepezi, Castex and Castello, 1970; The Maracaibo river stingray is only known from the Maracaibo lake in Venezuela.

*To my knowledge this species has never been imported into the hobby, although the names have been frequently used. All other species names, such as Potamotrygon humerosa and Potamotrygon reticulata found frequently in popular books and magazines are synonyms and not valid species names — and should not be used.