A survey reveals that one in ten UK households has pet fish. It’s likely that most tropical tanks involved in this statistic house communities of ‘bread and butter’ tropicals — and of these by far the most popular are likely to be tetras.

These fish are at the starting point for most community aquarist stock lists. They tick all the 'community' boxes, being generally small, hardy, peaceful and above all colourful creatures.

Few first-time fishkeepers haven’t been drawn to the striking blue and red coloration of Neon and Cardinal tetras (Paracheirodon innesi and P. axelrodi) or the cheerful orange stripe of Glowlights (Hemigrammus erythrozonus) at some stage.

There are, however, many other easy to keep, attractive, inexpensive and interesting species lurking sometimes unnoticed in shop tanks, waiting for the discerning fishkeeper seeking something a little different.

Think of the fish featured here as more the bread and ‘low-fat spread’ tropicals — maybe initially not as attractive a prospect, but better for you in the long term! 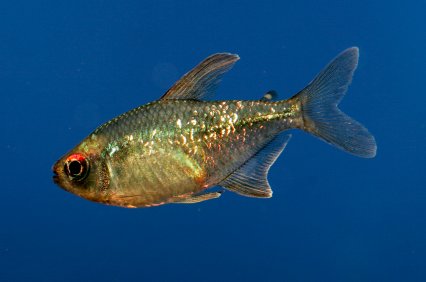 If ever there was a fish that consistently fails to sell itself it’s the Diamond tetra (Moenkhausia pittieri). Its common name suggests a sparkling jewel of a fish, glittering magnificently like its pricey gemstone namesake. However, what you will usually see in many retailers’ tanks is a disappointingly drab, grey fish that’s marked with just a few sparkly scales.

In the often sparsely decorated, brightly lit world of shop tanks they can appear all but invisible and it’s quite a leap of faith to buy a shoal of them when the next tank is full of garish guppies or colourful Cardinal tetras.

Make that leap. House them correctly, be patient for a few months as they settle and grow and you’ll be richly rewarded as these ugly ducklings change into stunning swans as bright, mature fish.

Adult Diamonds are dazzling fish, truly living up to their glistening name, with deep bodies encrusted in shimmering scales which catch the light, twinkling beautifully as they move. Body colour, starting as dreary ashen grey, is transformed into shades of green, gold and violet — all set off by a striking red eye.

Mature males develop magnificent extended fins and take part in some spectacular sparring to attract females — flaring those fins while circling one another before the dominant one darts in and chases off the loser.

They grow to around 6cm/2.4”, with males slightly larger than females. 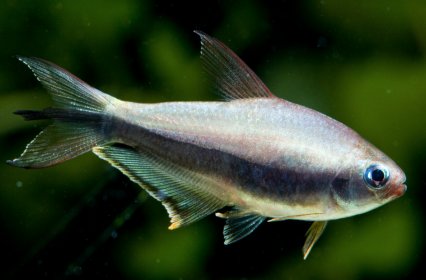 Adult males are especially handsome, boldly marked with a velvety black bar beneath their lateral line running from their gill to the end of a flashy filament trailing from the middle of their forked tail fin.

This aristocratic flair is further augmented by extended fins, which seem common to many male tetras.

The rest of the fish’s body is typically golden yellow or pink, particularly in bright tanks. However, under more subdued lighting, the upper body of mature males is a lovely purple colour which contrasts wonderfully with their blue metallic eyes.

The females are not nearly as elegant, yet still attractive, and can be readily identified from the showy males at an early age by their green eyes.

A totally black-bodied version of these fish is sometimes seen and usually sold as ‘Black emperors’. However, there has been debate as to whether these are just a colour form of N. palmeri or a new species and they are sometimes sold as N. amphiloxus. This name is currently considered a synonym of the N. palmeri.

Another that at first glance resembles the Emperor is Inpaichthys kerri, often sold as the Purple emperor.

While initially similar, this is a smaller, more blue fish without the extended tail filament. It also possesses an adipose fin, which is lacking in the true Emperor tetra.

They represent a quiet species that seems to do best in a well planted aquarium in the company of other, similarly quiet fish species. 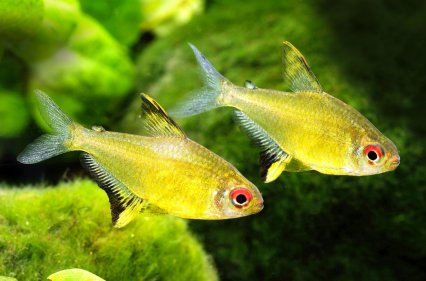 Pick a Lemon for the hardiest choice

If after a cheap, easily available, hardy and attractive species then the Lemon tetra (Hyphessobrycon pulchripinnis) is an obvious choice.

Despite its apparent ubiquity in the shops it is another fish often ignored in favour of more showy relatives. Mature specimens in a well-planted tank colour up wonderfully when compared to the often insipid fish that greet prospective owners in shops.

Like many tetras Lemons have a bright red eye that’s particularly dazzling against the yellow background. Fully grown they reach around 4cm/1.6”.

These fish have been commercially bred in vast numbers for generations, so they’re far more adaptable to a range of water conditions than their wild ancestors — making them a perfect choice for new fishkeepers. 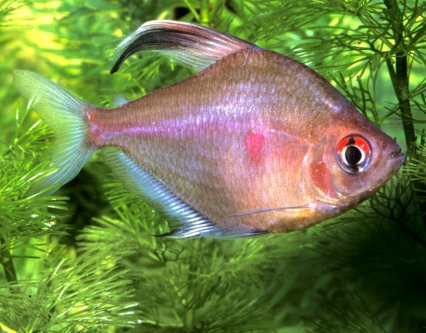 An affair of the 'heart' is worth the wait

Juveniles available in most shops are simply a dull, washed-out pink.

Their only real points of interest being a black and white blotch on their dorsal fin and the red spot on their lateral line, which gives them their common name.

Add to this unspectacular appearance a price that, while modest compared to many fish, is still at least double that of the average Neon tetra, and it’s easy to see why these fish end up ignored by many newcomers.

However, just as with the Diamonds, these fish will reward your patience.

Bleeding hearts get bigger than most other community tetras and are comparatively slow growing, but, given time and a well-planted aquarium, they mature to become one of the most beautiful tetra species on the market.

Females lack the extended fins and their coloration is more muted, but they are nevertheless particularly handsome.

As mentioned, they are larger than many tetras, with adult males reaching more than 7cm/2.8”.

They become particularly deep-bodied and a pronounced humped back is seen in older individuals.

Two other species are sold under the ‘Bleeding heart’ name. The first is Hyphessobrycon socolofi, a smaller, duller species sometimes sold as the ‘Lesser bleeding heart’.

The second is the more gaudy ‘Flame-backed bleeding heart’ (H. pyrrhonotus) which has a bright red bar on its back. This species is far more rare and attracts a higher price as well as staying considerably smaller than the true Bleeding heart. 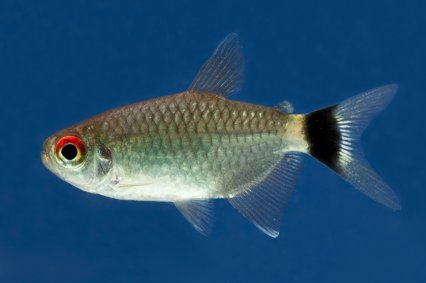 A shoal of Red-eyes will certainly be worth your focus

Silver has always been a popular colour for aquarium fish, with species such as Silver dollars (Metynnis sp.) and Silver sharks (Balantiocheilos melanopterus) tempting aquarium subjects.

Unfortunately both beauties grow too large for many of the tanks they end up in — but there are many more suitable and equally lustrous fish available to fill that silvery void.

The Red-eye tetra (Moenkhausia sanctaefilomenae) is an old favourite, always available in the shops, hardy and cheap, but its simple beauty is frequently overlooked in favour of more gaudy and ostentatious species.

As their common name makes clear, these fish have bright red eyes but their stand-out feature is their large, shimmering, mirror-like scales. This uncomplicated charm is further embellished by a bold black spot at the root of the tail.

Red-eyes are quite large and chunky and adult sizes of around 7cm/2.8” common.

Their fast moving, sometimes boisterous nature can make them unsuitable for tanks housing some more placid species, but alongside equally robust and outgoing tank mates a shoal of these can make a dazzling display.

Costs at a glance

Want to keep some? Farmed tetras are so adaptable

All the tetras mentioned in this feature originate from South America and, like so many fish from this region, will do best in soft, slightly acidic conditions.

Luckily, for those unable to provide these, most tetras in the shops are mass-produced in Asia and Eastern Europe and, as a result, are far more adaptable than their wild ancestors. However, you’re unlikely to see their best colours in hard, alkaline water and breeding may be difficult.

Dozens of wonderful species sadly look far from their best in the often brightly lit, sparsely furnished and chemically imperfect water of the average aquarium shop. Many better shops will strive to provide their stock with more salubrious housing, but, even in these instances, you’re unlikely to see adult tetras in their colourful prime.

These tanks will often reveal the dormant beauty of those seemingly optimistically named fish you may have just walked past, while also opening your eyes as to just how gloriously colourful a tetra-packed tank can be!