Catfishes: Music of the night Michael Hardman reveals that catfishes can grunt, drum and sing, according to their moods when the lights go down â€“ while others live with no light at all!

Some fish sleep as we do. When the lights go off, they head for a quiet corner and lie still for several hours. Their heart rates slow, colours fade and gills pump less frequently.

Yet many fishes also work the night shift. They are lurking predators hoping to stumble over a sleeping victim or spring from a dark corner.

However, the camouflage of night also works as a defensive weapon and many fishes emerge in early evening to graze, free from fish-eating birds.

Most fishes are diurnal — active during the day — but with a few exceptions, catfishes buck the trend. They intimately explore their environment, relying on sound, smell, touch, electricity and, to a lesser extent, sight to monitor the whereabouts of prey, predators, competitors and potential mates.

Most fishes hear at least as well as birds and mammals and, like us, bones inside their inner ear stimulate the parts of the brain that process sound.

Many catfishes make their own sounds to intimidate, or stimulate a potential mate. I keep driftwood cats and suckermouths in the aquarium and regularly hear them during territorial disputes. By rotating or withdrawing their pectoral-fin spines in their sockets, they make loud grunts. Other cats vibrate their swimbladders to create a drumming sound.

Several Corydoras species are known to 'sing' to each other when spawning, but the song differs, depending on the listener. Rival males sing threatening songs to each other, but serenade an ovulating female. 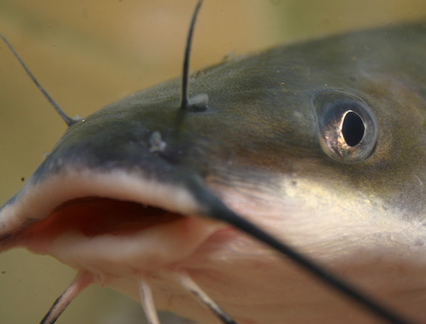 All in good taste

Inside your mouth are some 10,000 taste buds, but the Channel catfish has twice as many and twenty times as many over its body. Some describe these cats as ‘swimming tongues’.

Catfishes’ taste buds are concentrated on different parts of the body and are used to gather information about where food is and whether they should eat it.

However, catfishes only use their taste for feeding. Their exquisite sense of smell locates food as well as potential mates, predators and competitors.

At the front of the head, paired scent organs sit within small pits. Holes at the front and back of these let water through like an underwater tunnel. All the information is processed in a dedicated part of the brain called the olfactory lobes.

For most catfishes, vision is merely an accessory. Some groups have developed specialised eyes that play an important role, but in others, like the Electric catfish (Malapterurus electricus), the part of the brain that processes visual information about the environment is more simple than that of a cave fish. 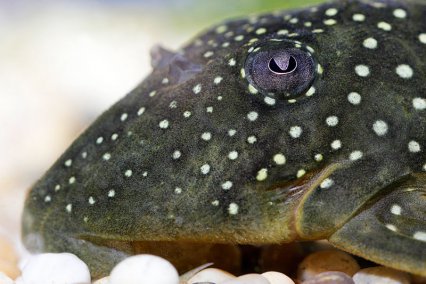 The visual pigments of catfishes adjust to low light, so more short wavelength light is picked up. Pupils are dilated to let more in and in the suckermouths the special iris flap contracts to gather what remains. During the day, this flap is relaxed and pupil becomes a thin crescent. Physiologists believe that because of these shapes, suckermouths can see in front for food and behind to check for predators at the same time. 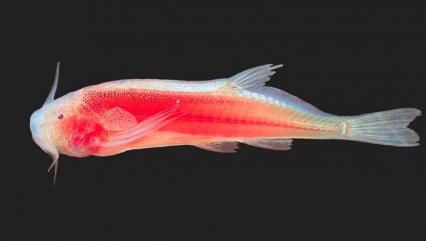 Several trichomycterids (vampire or parasitic catfishes) bury themselves 10-50cm/4-20” into sand during the day. Yet at night, members of Pygidianops, Typhlobelus and Sarcoglanis (pictured above by M. Sabaj) emerge to scour sandbars for invertebrates, scales and other edible animal parts.

Several catfish lineages do not need light to complete their life cycles. All cats shunning light are depigmented, small eyed and small bodied.

Half a kilometre underneath San Antonio in Texas, ictalurid catfishes called Satan and Trogloglanis live in total darkness, feeding on amphipods, worms and other animals that have shifted to a life underground.

Catfishes are also found deep in the water column. Bathybagrus tetranema (Claroteidae) lives 50-100m/164-328’ down in Lake Tanganyika where it roams in search of lost cichlids. Bathybagrus only has four barbels and its eyes are covered with thick skin.

Most catfishes live in much shallower water, but the Amazon and Orinoco rivers carry so much sediment that light penetrates little more than a metre. At 15-50m/49-164’ deep, there is no light, but cetopsids (Cetopsis) – pictured at the top of the page – aspredinids (Hoplomyzon), doradids (Leptodoras), trichomycterids (Sarcoglanis) and suckermouths (Planiloricaria) live on food washed from above.

Curator of ichthyology at the Academy of Natural Sciences in Philadelphia. Dr. John Lundberg studies the higher relationships among all catfishes, but focuses on the systematics of Pimelodidae.

Your Calhamazon project led to amazing discoveries. Is there still a lot to learn about deep channel fish in South America?

Chances are very good that there are several yet unseen species of fishes in the deep channels of the Amazon and other big rivers of South America.

The project focused on the mainstem of the river and lower reaches of major tributaries in Brazil. The channels are scarcely known, particularly in tributary rivers coming off the Andes, and the Guiana and Brazilian Shields.

Beyond baseline discovery of species, there is almost nothing known of growth and reproduction, migrations and food webs involving channel fishes. The channels of the Paraná-Paraguay system have never been explored.

Catfishes underground or deep in rivers tend to look alike. Are they adaptive, or are these features due to the consequences of development and growth in the dark?

These features do not appear instantaneously. It can be said that reduction and loss of eyes and pigmentation are adaptive, so too a reduction in maximum body size.

Eyes, pigments and body mass are energetically costly to make and maintain. In a lineage facing permanent darkness, reduced food resources and vigorous hydrodynamic conditions, premiums would be placed on genotypes and phenotypes that save energy for reproduction as long as other necessary biological functions are not compromised.

Ichthyologists suggest one reason behind the global domination of catfishes is their nocturnal lifestyle. Would you agree with them?

Nocturnal and crepuscular life habits could have opened largely under exploited food and space resources for early subgroups of catfishes. Then, as their lucky descendents found themselves in new waters, they would be pre-adapted to continue that dark lifestyle. But catfish diversity shows adaptability in setting up successful lines in high mountain streams, shallow seas, surface waters of rivers, deep lakes, subterranean waters, and moist leaf litter near forest streams.