Biotopes of Mozambique: Magic in the mountains In war-ravaged Mozambique there's little hope and even less water, unless you're looking for fish in higher ground. Heiko Bleher follows in the footsteps of a pioneer explorerâ€¦

Wilhelm Karl Hartwich Peters was a man I always envied. He was the first to research in Mozambique.

His expedition was in 1842 and he returned to Berlin with an enormous collection of specimens, having researched 51 freshwater fish species.

Having read about his amazing travels I’ve long been eager to research there as well. However, opportunity and the legacy of a lengthy and bitter civil war there had prevented me doing so.

I had also read that the first live cichlids were imported form Beira (Mozambique) before World War Two and they were called Haplochromis philander disperses, which is today considered Pseudocrenilabrus philander.

This excited me even further because I had found a very interesting Pseudocrenilabrus in South Africa near the Mozambique border, which did not look like the philander from Lake Otjikoto in South-West Africa. Then I read that there should be no Haplochromis in Mozambique, although a black and white photo from 1937 shows clearly a Haplochromis or a Chetia. I had to go to Mozambique... 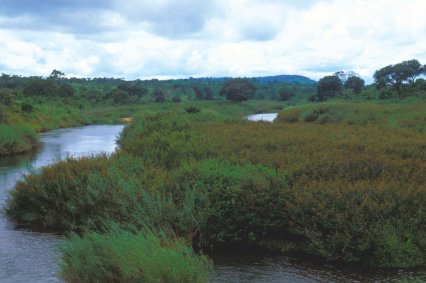 I flew to Johannesburg in South Africa, and drove  the long trek solo, crossing the Drakensberg mountains into Mozambique from the northern end of the Krueger National Park. Late afternoon, I reached a village that looked as if it belonged to millennia gone by. Even its plough seemed Stone Age.

The mud huts were beautifully painted and covered with palm leaves. No one spoke Portuguese, only a native Bantu mixed with Portuguese, so I understood some words. I learned that there was no water nearby and the tributaries to the Limpopo — my first destination — were all dry.

At sunset I reached the Limpopo’s shore. The water wasn't even knee deep and this is supposedly one of Mozambique’s largest rivers.

I only netted a Clarias, probably C. gariepinus, and a Tilapia, as well as a Xenopus frog, probably X. laevis. This belongs to the only frog group living permanently under water and is endemic to Africa. However everything was desert-like along the riverbed, nowhere where a fish could find protection or food. Only the tough guys have a chance...

After another 75 km/47 miles drive along the Limpopo, partly in its riverbed, I came to three houses, one made of brick. On the map this was Mapa, but the sign said Mapai and showed it north-east of here. A native told me Mapai was 17 km/11 miles across the Limpopo, but the riverbed here was at least 500m/1,650’ wide and there was no bridge. Luckily it was shallow and sandy, and although I got stuck twice, four men from the settlement helped to push me to the other side.

Burned-out vehicles
The dirt track to Mapei was lined with several bombed and derelict houses — grim reminders of the hostilities. Natives lived in mud huts next to burned-out vehicles and tanks.

There was no water all the way to Mapei. Then I had to find a place to fix the exhaust pipe, which had become dislodged on these primitive roads. Finally I found a guy called Ernesto who helped find someone who could weld. Job done, Ernesto said he could show me the way to Massenga. I had chosen dirt roads to avoid rivers indicated in Google maps but, as Ernst said, none had water and no listed villages existed any more.

Massenga lies on the Save river on the maps, but in reality the riverbed is 4km/ 2.5 miles east and I would need a tractor to get across a shallow channel about 100m/330’ wide. I walked across and at the deepest point was about 1m/3.3’. I knew I would get stuck. With eight men pushing from behind we made it across, my 4x4 filling with water.

During the night I camped and researched in the Save, but found only more Glossolepis and Tilapia. I knew I had to get to the source of these rivers. 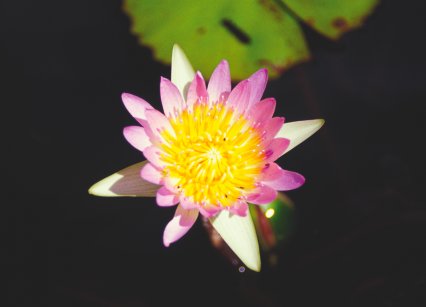 I headed north and I saw a bombed concrete bridge over a small creek. It still had a little pool with water lilies. I walked down as a beautiful hornbill took off. In the shallows I found plenty of fishes, so that bird must have had a feast. There was so much life and countless frogs. The fish biomass consisted of four different species — three Barbus and another clariid catfish.

Further on I found another couple of drying pools and Nympheae struggling in any remaining wet soil, surrounded by bushes with climbing yellow flowering plants. In these pools and at my next collecting spot in another waterhole, I found the same barb species. 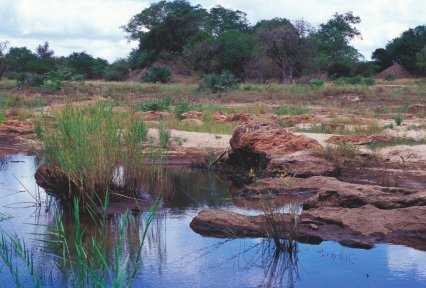 This biotope, once a flowing river, consisted of lava rock formation and in their crevices I spotted beautiful P. philander flashing in the early sun. 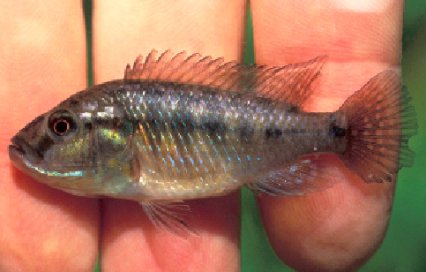 There was a pair in clear water carrying babies and when I moved close the female (above) sucked all of them into her mouth. 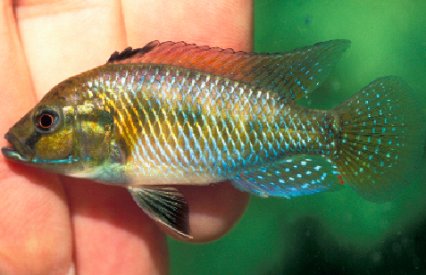 The male was a bright bluish yellow colour and they swam between half submerged Cyperus plants along the edges and some floating Najas species. 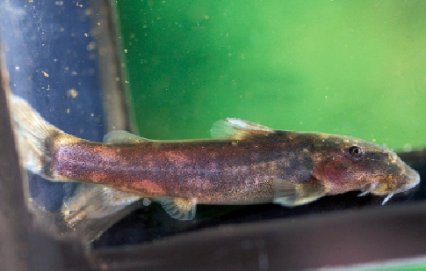 I collected one Chiloglanis species, possibly emarginatus the Phongolo suckermouth, about 5cm/2”. There was another small Barbus, bluish in colour, and many empty mussels. Water temperature was 28°C/82°F, pH 7.23 and conductivity 830 µS/cm. Air temperature had already reached 38°C/100°F.

I next headed for Beira, Mozambique’s second largest city by the Indian Ocean, for fuel and oil which was impossible to find at my next planned destination.

I drove to Chimolo from where I wanted to reach my most important destination in southern Mozambique — namely the headwaters of rivers in the Chimanimani mountains. which included Mount Binga at 2.445m/8.020’ and stretching for 50km/31 miles, to form the border with Zimbabwe.

Amazing plants
Binga is Mozambique’s highest mountain and I knew there was a track from Chimolo going almost to the top, crossing all of its hill streams. I followed a dirt road and further up, above a dam found very interesting fish species and some amazing underwater plants. Later I found out that it belongs to the genus Hydrostachys and is possibly one of the most amazing aquarium plants never previously collected. 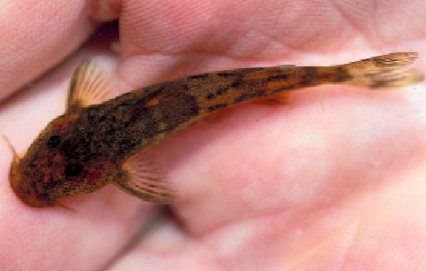 The Revue river, not far from a native village called Dezembe Centro, had clear, fast flowing water and was an ideal place to camp. Late that night I walked over the river’s stone plates and watched at least two Chiloglanis species; a larger one (pictured above) which I later identified as C. bifurcates growing to 7.5cm/3” and C. neumanni at about one centimetre less in total length.

There were groups of four to seven of each, scraping and eating from the aufwuchs over the plates hardly more than 20cm/8” deep in the fast current. 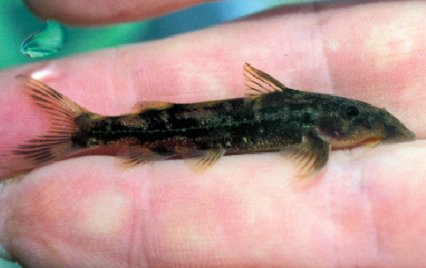 One has to wonder how they can swim and feed at the same time under such a fast water flow, but I noticed later that C. neumanni (above) particularly has large ridges on the head and body which clearly enable them to do so.

I collected both for the first time alive and one female was full with bright yellow-golden eggs. 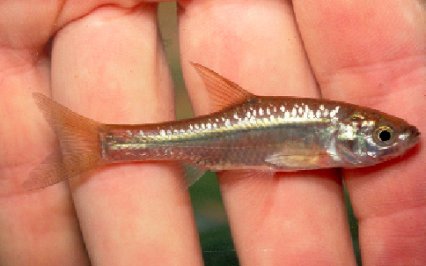 I also collected a pair of Barbus paludinous and one specimen of the latter was bright golden – possibly new. 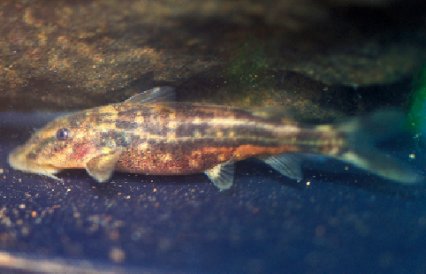 Further upriver, again over rock plates, I found a third Chiloglanis species, (C. paratus), including another female full of eggs (pictured above) There were two other smaller groups of fishes, but I wasn’t able to catch any. One was a very beautiful Garra species with a juvenile, and the other an elongated and colourful Barbus species.
In addition, near the edge of the river, but still over these large rock plates, there was a fantastic Cichlidae which was always able to evade my hand-net. 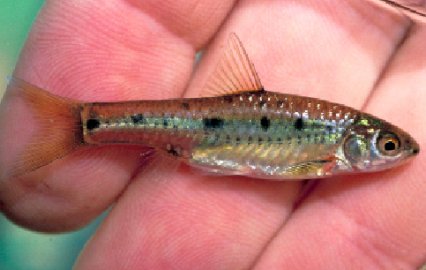 The next morning I collected day-active species and took Barbus, probably B. eutaenia, and below overhanging grasses there was a small beautiful golden coloured Barbus with five black spots, possibly B. lineomaculatus. 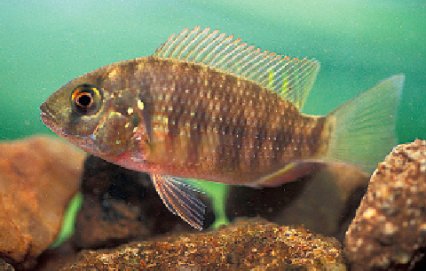 Original subspecies
Then, a little deeper, there were three different tilapine species. One very small species (pictured above) was hardly 6cm/ 2.4” TL, which could be the original described subspecies of Tilapia rendalii, named swierstrae by Gilchrist and Thomson in 1917, but later placed in synonomy to T. rendalli. 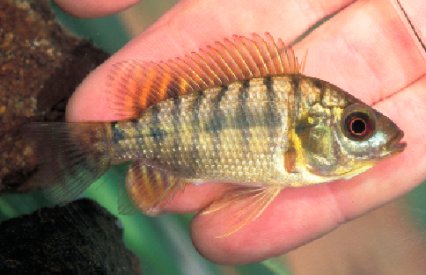 The second was Tilapia sparrmanii, also a smaller species, and this population had amazing yellow-golden stripes, especially in the fins. The third, Oreochromis cf. niloticus (above) looked similar to the described species from the Nile, but all populations I collected throughout Africa were not as colourful as this…

This high-altitude site was my most successful collecting site so far, offering some very interesting fishes. The water parameters at 9am were pH 7.36, conductivity 50 µ/cm and water temperature 26°C/79°F.

The river was filled with reddish lava stones and on these grew amazing fern-like underwater plants, together with rock-plates.

Heiko's other biotopes in this series are:

Biotopes of Goa and Karnataka, India