Biotopes of Iran: On the very brink Even getting into Iran was difficult — and proved a prelude to the extreme conditions we and its fish were expected to face in this sun-scorched country.

The Iranian Consulate in Milan claimed we needed a contact number from the Ministry of the Interior’s website and only then could we apply for a visa. This would will normally take 14 days, but the website was currently ‘under construction’…

A friend unsuccessfully tried to get the visas for us in his own city, then drove 600 km/370 miles to Tehran to try his luck there. Twenty four hours before our departure, he called to say we could get them on landing at Tehran airport.

We arrived in the early morning to find immigration closed as the airport officials pray at least four times each day. We finally found one who had finished and our friend Behnam welcomed us, together with Ramtin, the largest fish breeder from Tehran’s sister town of Karaj.

Ramtin’s breeding establishment was breathtaking, as I was to discover later. His father had designed large vats and hundreds of aquariums built in four sections, each run by a gigantic filter. Every fish looked healthy and happy

The system never needs a change of water, only topping up after any evaporation, and it has been running efficently non-stop for ten years, according to Ramtin.

The journey south was long but the four-lane highway was in excellent condition. That evening we reached Esfahan, one of the oldest and most beautiful of Iranian cities.

Behnam showed us around, but I was keen to start researching in the Esfahan region for the killifish Aphanius isfahanensis. It was only described in 2006 by Hrbek, Keivany and Coad, but I had not seen a picture of it anywhere.

Behnam showed me the type locality, the Zayandeh Rud (Zayandeh river) at Varzaneh bridge, which is redundant now as the riverbed is completely dry! There’s a dam in its upper reaches, as the little water it gets during a few days in spring is urgently needed by local people.

Before the river became completely dry engineers pumped some water into the only mountain at Esfahan’s southern region to a park. They also incorporated a circulating spring water channel, some 50m/165’ long, and when completed some Aphanius appeared — a tiny population still surviving. 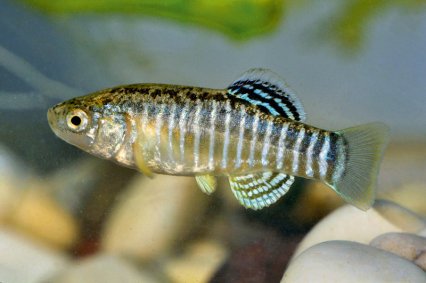 First we found only Gambusia in the channel, but then discovered a few Aphanius in deeper water. It was A.isfahanensis (above) possibly one of the last survivors.

Most easterly cichlid
The following day we travelled south-west, as I wanted to search for several Aphanius species and the most easterly of all cichlids on earth, the endemic Iranocichla hormuzensis. We drove along desert with mountains on both sides, but no trace of vegetation. We crossed riverbeds which hadn’t seen water for decades.

Behnam had told us about a beautiful waterfall in Semiron, which should have fishes — but no one was certain.

Hours later we find it outside a village which even had an aquarium shop which was selling Parrot cichlids and goldfish. 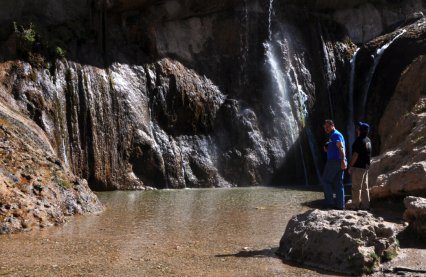 We were 2,000m/6,560’ above sea level and the waterfall was hidden in a small canyon. Just a few drops of water were falling and there were no fish.

Later we reached a sign directing us to a nomadic settlement at Ab Malakh (meaning fall, like waterfall) and the creek had crystal clear water. It looked very remote and almost untouched.

I found several cyprinids, including a nice golden and black striped Alburnus, probably
A. mossulensis. Juveniles were swimming along the shore, while the larger ones, at nearly 20cm/8” TL, were only in the fast running water.

Also along the shore, among some aquatic Potamogeton plants, was an excellent Barbus-like fish with golden body colour and black blotches, probably Capoeta aculeata, which could be ideal in smaller groups for aquaria. 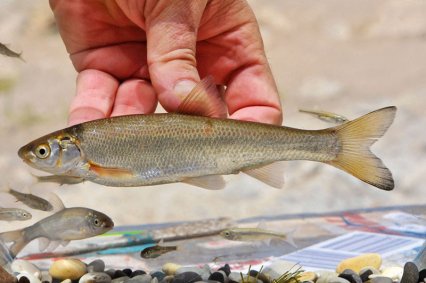 In the open running water we also collected a cyprinid with yellowish body and yellow fins, a large Chondrostoma cryi (above).

Along the sandy bottom, in between larger rocks, was a fish which I first thought was a real Barbus with its two pairs of barbels. Yet when my partner Natasha photographed it I realised it had to be a Schizothorax, later discovering it was S. zarudnyi.

I also netted a really small and beautiful frog along the shore.

I walked for about one kilometre downriver and came to the waterfall Ab Malakh. From the top of the mountain the cold water tumbled over massive rocks into the creek. I fished everywhere underneath and round it, but found no sign of fish.

This place was pleasant and the water refreshing; the temperature was only 17.8°C/64°F, conductivity 19 µS/cm and pH 8.0 at noon.

We drove back to the highway continuing south, crossing mountains left and right and after an hour we crossed a bridge with a larger river flowing below. I found one large predator, Aspius vorax, in open water at nearly 1.5m/5’.

Along the shore, below overhanging bushes and in muddy and stony ground, I found the sub-species of Capoeta barriosi named mandica, and an unidentified Garra. Surely there are more species of Garra still to be named in Iran! The water was 19°C/66°F while the air was 30°C/86°F.

New species
Behnam wanted to find trout at a farm off the main highway in a mountainous region where water was falling and ideal for aquaculture. Next to it was a creek with many aquatic plants, which I believe were dark green Myriophyllum of a species I had never seen before and a light green Samolus species with some red veins in the leaves.

It was a pleasant but small habitat, with a rocky bottom, sand and many fishes, but Behnam took only a single species, probably Alburnus filippii.

South of the city of Shiraz I knew of a creek where a dam had been built and wanted to see if it still held water and fishes. We discovered hardly any water there and the creek, called Mond river, was just a few centimetres deep.

The biotope below was full of rocks and algae was everywhere, often in thick layers. In what little water managed to flow I found a few surviving fishes and some Cyperus species.

I caught one beautiful Cyprinion tenuiradius, probably never seen alive before, and this could become a biotope aquarium. 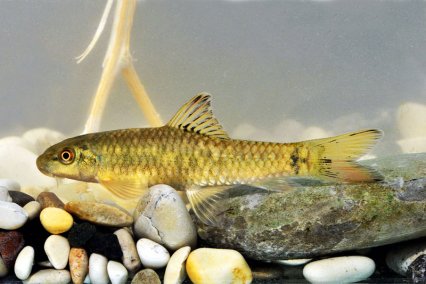 However, another beauty, Garra persica, caught my eye. I had never seen one alive before and only previously witnessed such a colourful Garra when collecting on the other side of Gulf in the Emirates in 2009.

From here we drove to Lãr, Iran’s hottest city, where it's claimed the temperature hardly drops below 40°C/104°F, but we were to find hotter locations... 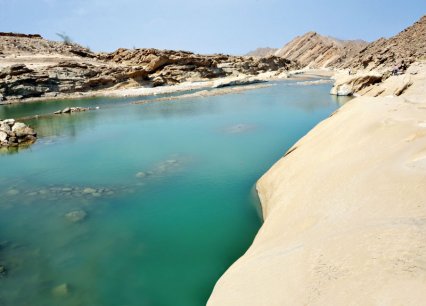 Brian Coad, the Canadian ichthyologist and expert on Iranian fishes, and who also described Iranocichla, recorded 22 sites for this cichlid. I wanted to see them all and perhaps find a new one. The first was south-west and the river was said to lie between Hormud and Tangdãlãn, but there was no longer a riverbed, only a lake with desert on both sides.

Here at 625m/2,000’ above sea level in very salty water, among millions of Potamogeton plants, I walked along the salt-accumulated shore, seeing many dead fishes — first Iranocichla and then Aphanius. 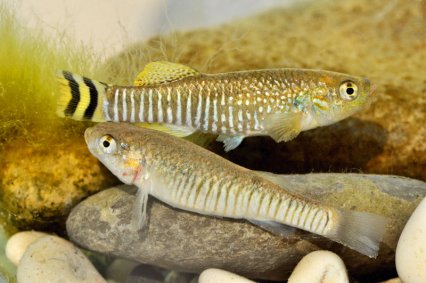 It was a thoroughly unpleasant experience to go breast deep into this saltwater and try to bring my seine ashore with tons of aquatic vegetation in it. Somehow I managed it and there was plenty of Apanius (above) possibly a new species. It looked like A. ginaonis at the time, but I found that species later at its type locality and it looked very different. 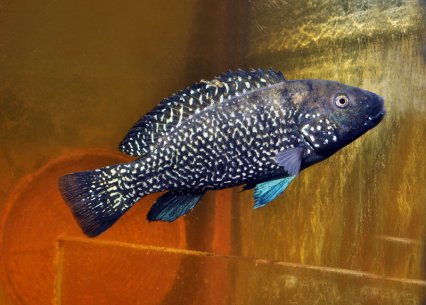 Sites remaining
The Irancichla here also looked different from what Coad has published, and had less red. I gave this Iranocichla hormuzensis population the title of number one, as I found three different ones.

Of the 22 sites registered as to where they occur, only two had water remaining...

There was no other fish species, as they probably cannot survive these conditions. I wonder for how much longer these can live in increasingly salted conditions. Water temperature at 16.00 hours was measured at 35.6°C/97°F, conductivity 6650 µS/cm and pH 7.6.

I had no oxygen with me so most of the 20 collected specimens died from heat exhaustion on the journey to the Strait of the Hormuz on the Persian Gulf. We could hardly breathe in this the most intense heat I had yet encountered. 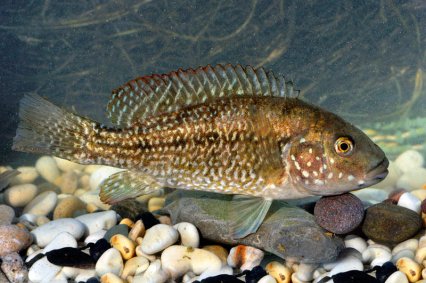 I researched the entire area of the Strait of Hormuz and it was most depressing as most of the locations recorded for Iranocichla had been dry for a long time.

However, I had found variants on this my most recent trip; the two possibly new Aphanius species and the one described form here. I was able to get examples of the two of the three populations back and hopefully we will be able to breed them.

In its natural habitat this beautiful and very unique cichlid (above) is surely at the very brink of extinction. Global warming is taking a toll far greater and far more rapidly than many believe.

Heiko's other biotopes in this series are:

Biotopes of Goa and Karnataka, India