Heiko Bleher's relentless search to find and photograph new fish takes him to the Yungas, a remote region of Bolivia fished before only by intrepid pioneers.

Lunchtime conversation with the now late Jacques Géry got round to Nathan Everett Pearson, a student of world famous ichthyologist Carl H. Eigenmann, and who had found many new species in an area of Bolivia.

When Jacques asked why I had not been there a new expedition began to form in my mind...

Jacques was referring to the Yungas where Pearson, during 1921-22, had collected 6,775 specimens, of which the characiformes represented about half of his collection and 77 of a total of 155 species there. Pearson had actually found 25 new species and two new genera — of which most had never been seen live until today.

I have collected several times in Bolivia, but never in that part which is on the eastern slope of the Andes. I felt some very interesting research was there to be done!

The only other person who had reported fieldwork there was Perugia, who in 1897 published on 200 specimens Professor Luigi Balzan (who had the cichlid Gymnogeophagus balzani named in his honour) had found in Bolivia. They represented 37 species, of which five came from the Marmoré and 32 from the Beni, in the Yungas.

Haseman also collected in Bolivia, but only in the Marmoré/Guaporé region.

I wanted to see some of those new genera and species live, especially after I searched and found out that none had ever photographed in the wild and very few had ever been collected.

Bolivia beckoned and La Paz, the highest capital city in the world, brought back childhood memories. After we came out of the jungle in 1955, during my mother’s first two-year South American expedition, she had to sell her Rolleiflex camera to get enough money for our train tickets to Arica in Chile.

We were also involved in a bus accident in Cochabamba and I needed many stitches in a head wound. We also lost two years’ worth of collections of fish, plants, insects and animals —  all except Tincho and Pancho (two Capuchin monkeys), Lorita (a parrot), Aquilia (an eagle) and Lagarto (an iguana). 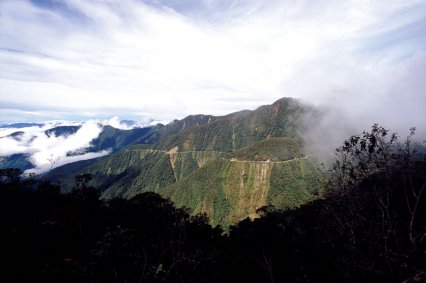 The road from hell
I rented a 4WD truck with spare tyres and fuel tanks in La Paz for this expedition. Once on board I had to cross the city in an incredible traffic jam uphill because although La Paz is almost 4,000m/13,100’ above sea level, it lies in a valley and you have to climb to cross the Andes to almost 4570m/15,000’.

At the city exit all vehicles must stop. Your personal ID, car registration and destination is enterered in a book. First I wondered why, later I was to find out…

On the very top, in late afternoon and after continuous rain, the sun came out and, from the peak, I saw what was front — carretera de la muerte (the 'highway of death'). Here you drive on the left, just inches from a deep abyss, and every few hundred metres there is a cross on the roadside as it seems that every day one or two cars plunge down… 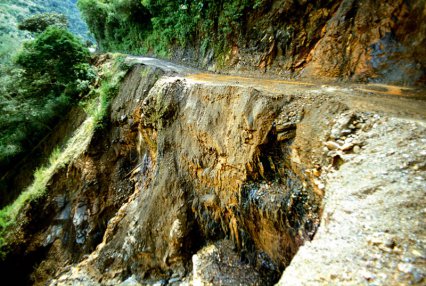 In most places this mountain road (pictured above) is no more than
2 m/6.5’ wide and if another car comes in the opposite direction you have to back up until it widens — and this on a slope which goes straight down 500m/1,640’ or more.

Water flows almost constantly from the mountains and it rained non-stop when I was driving. It rains frequently along the eastern mountain slopes, which turns this treacherous road into a muddy, even more dangerous one!

Having successfully negotiated 'the highway of death' I reached a point, at around 2,286m/7,500', where there was a side road that crossed a tiny, shaking bridge over the Río Huarinilla. I had to stop and, although it was getting dark, I caught in my hand net three very interesting tetras with their mouths up.

Pearson had described Hemibrycon beni from an lower area of this region with a similar mouth shape but different colour pattern. Interestingly, mine lived only in the fastest flowing part of this mountain stream and up to 2743m/9,000’ high.

I awoke to find hundreds of gigantic tree ferns, bromeliads, in the treetops, Heliconia with their long red and yellow flowers along the road, across were orchids with violet flowers and tucanos were flying overhead. It was good to see because, further on, people had deforested to plant bananas. Then came the lower checkpoint before Caranavi, after crossing the Río Kaka. The military police couldn’t believe I was travelling alone…

Caranavi is a larger city with buildings along the Kaka river for kilometres. From here the road went uphill again to Carrasco. It rained continuously and the road was pure mud. If I hadn’t this high wheelbase 4WD I would never have made it to Sapecho which was just a couple of houses. Fog then became so dense I spent another night in the car. 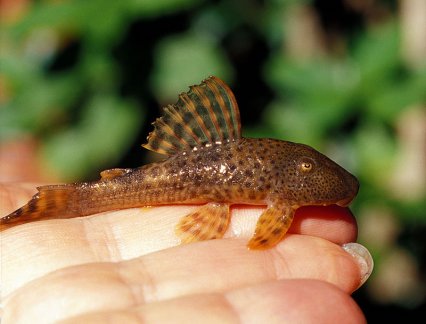 In the Río Jarreli at 7am I collected some beautiful Hypostomus (probably H. bolivianus) and an Asytanax, recalling that Pearson found four different ones during his expedition. Here in the middle of nowhere, the early morning view was unbelievable: primary rainforest as far as the eyes could see with trees covered by epiphytes.

It continued like this almost until I reached Yucuma (Yocuma), a tiny settlement that showed I had already reached the flat land, the Amazon basin. I could see entirely deforested areas and extensive cattle ranching, a few palm oil plantations and a single aquaculture station, sponsored by Europeans but not functioning. Yet here I had a stroke of luck…

Along this dirt road I suddenly had an urge to stop and enter the bushes to my left. It was actually the only place where I found trees.

'Swimming jewel'
Sure enough, about 200m/650’ inside, there was a small lake about 10m/33’ across and no more than 30cm/12” deep. It was a fully functioning environment with different insects, plenty of aquatic vegetation and tea-coloured water. The bright sun hardly penetrated the treetops. I knew there were fish and came up with 27 different species in lttle more than two scoops. 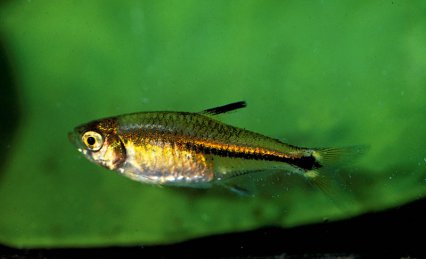 My most exciting find was a tiny characoid, a swimming jewel, which is not scientifically described but probably a Tyttocharax sp. It had a bright gold body, black stripe below the centre golden stripe, two large yellow spots above and below the large black caudal peduncle spot, golden eyes and was only 2cm/0.8” long. Hopefully we can breed it. 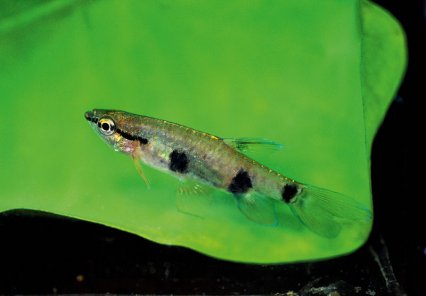 There was also an Apistogramma — according to Steack a new species — a strange looking red eye Moenkhausia species and a spectacular Pyrrhulina cf. vittata.

My next stop was the Río Tigre which was full of shrimps, some lobsters, crabs and another Astyanax in schools. Under rocks were a couple of interesting Ancistrus species, maybe A. montana. Pearson collected in this area and had four different Ancistrus on his journey: cirrhosa, hoplogenys, bufonia and montanus.

That evening I reached Rurrenabaque, a city at the intersection of three major ecosystems: mountains, rainforest, and pampas. The result is a remarkably high diversity of wildlife. It is also the gateway to most of the Bolivian Amazon area for tourists — mainly travellers and eco-tourism lovers.

Next day I had to have the vehicle fixed after the pounding it had taken on those terrible mountain tracks. Afterwards I set off to find Pearson’s locations along the eastern slopes to Ixiamas and Alto Madidi and I wanted to cross the Río Madre de Dios and drive to Cobija. The ferry took my Toyota across the Río Beni to where my road headed north-west.

On most of my drive to Ixiamas I had the high eastern slopes of the mountains to my left and It was little more than 100km/62 miles from Rurrenabaque with Tumupasa near the middle to where Pearson researched. After all day collecting in every creek and waterhole I could find, I reached Tumupasa in early evening.

National park
A cafe owner there told me that in 1995 Conservation International was able to convince the Bolivian government to establish the Madidi National Park in this area. It is home to 85% of all the bird species in Bolivia and 11% of all the world’s bird species, 75% of Bolivia’s mammal species and 40% of the country’s reptile species.

A dam is set to be built across the Beni at the entrance of the national park, flooding the established Chalalan Lodge and surrounding rainforests. There are road projects in the pipeline too and two companies hold concessions to search for and extract hydrocarbons within the park’s boundaries.

I camped along of one of the 100 creeks flowing from the mountain to meet the Rio Enapurera, Undumo or later the Claro and Madidi rivers. Along this stretch and in many parts of the national park were cattle farms. Finally I found a spot, still amid primary rainforest, and at dawn thousands of dragonflies were in the air. 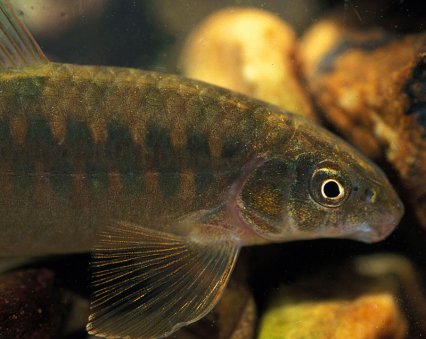 In the stream, full of rocks, I saw hundreds of Characidium — characoids living mostly over the substrate — swimming in the fast current over and under the rocks.

They were beautifully banded with very large pelvic fins, like hands, which they use to hold onto the rocks in swift waters and graze on the aufwuchs. It took me hours to catch just a few as they were too fast. I hope this fish is C. bolivianum, which Pearson originally collected in Tumupasa.

Next day I was appropaching Ixiamas, with only cattle farms and rice fields in view. It reminded me of an old Wild West town — the end of the line! Except for cattle, rice and wood,  there’s nothing to haul away.

I was told that the road goes no further than Alto Madidi, not even to Cobija. I walked a small track for kilometres and encountered a hunter who told me that there had never been a road! I could go to the river (Madre de Dios) and no further... 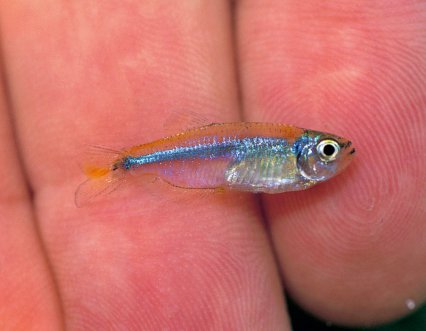 My luck was in though. In a small creek flowing from the mountain I saw some beautiful blue, neon-like, luminescent fishes. With my hand net I chased a small group into a corner of this 30cm/12” deep crystal clear creek. Once caught, I realised they must be a Tittocharax species.

Back at my home in Italy, I sent some to the characoid taxonomist Dr Stanley Weitzman and he identified them as similar to T. tambonpatensis. This tiny tetra, hardly 12mm/0.5”, then spawned like crazy at my friend Peter Frech’s place in Germany, with thousands of large eggs!

However, after the second generation only very few eggs appeared and after the third there was nothing. The reason is is a still an unresolved mystery.

Pearson and Eigenmann had a great opportunity to see in South America nature at its best — and I can be proud that I have too, I just hope the fishes I brought back will become established in breeding around the world.

Why not check out Heiko Bleher's expedition to Maharashtra, India?