Biotopes of Australia: Beauties among the beasts Heiko Bleher heads for Crocodile Dundee country in the Northern Territory of Australia and finds a place where not all the creatures find humans tasty!

I had arrived in Darwin minus fishing and collecting gear, which had been left in Paris, and with only a gift of a T-shirt and some hasty tank, net, torch and food purchases, my expedition to the northernmost tip of Australia seemed ill-prepared.

However, my colleague Bruce Sambell, owner of Ausyfish hatchery, assured me we had everything we needed, so we set off early next morning, heading south. 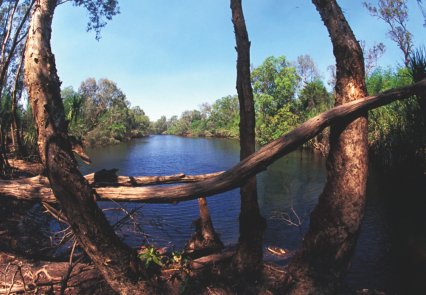 Our first destination was Wangi Falls (pictured at the top of the page) in the Litchfield National Park 100 km/62 miles south-west and we sought out the remote 'jungle' roads, so camped along the Jim Jim Road, along a creek which ended up in a branch of the Adelaide river. 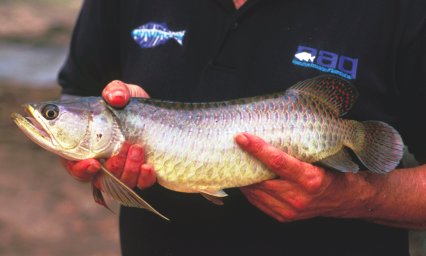 While Bruce and his friend prepared a Barramundi they had caught I looked for smaller fishes. Bruce later also caught a larger Scleropagus jardini before warning me that I should not get into the water as crocodiles were about.

Bruce screamed but I told him to calm down and walked in the water toward the animal, showing my colleagues that it would swim away — and it did.

I have visited Australia regularly since 1974, and I simply do not believe all those tales of crocs taking people as food. I have never been attacked anywhere by a croc.

Anyhow I survived the night, found interesting gobies, and saw several night active Toothless catfishes (Anodontiglanis dahli), in groups below the roots of the trees growing along the river’s edge, and also the rainbowfish species Melanotaenia splendida inornata. 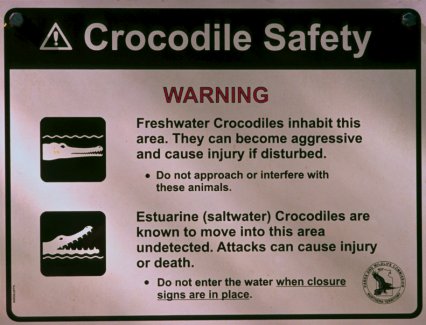 Next morning we drove to the Wangi Falls, a beautiful but deserted place fenced in with signs warning that swimming is prohibited because crocodile attacks "can cause injury or death."I climbed the fence, just to see some of the fishes and Bruce warned me again of the dangers.

In the clear water I could see the bottom, covered with larger rocks and gravel, and the rocks were covered by algae. There were plenty of fishes, large groups of what

I think were Gulf grunters (Scortum ogilbyi) which can grow to about 40cm/16” .

We then headed for the Stuart Highway 1, after crossing Pine Creek and the Fergusson river, driving south 340km/210 miles to Katherine, which is the fourth largest township in the Northern Territory with 6,000 residents. The Katherine river runs through the north of the town and has a history of flooding, doing so in 1957, 1974, 1998 and 2006.

We fuelled up Bruce’s truck, ate and went on, as I wanted to see some of the tributaries of the upper Katherine river, and we wended up to a remote area on a rough track called Giyamuckur Buck Jungle Springs.

The small creek was full of driftwood and fallen-in trees and there was white fine sand everywhere, with a few roundish, beige rocks. Overhanging trees gave shade and the water was tea coloured, flowing swiftly.

While the rest camped and prepared to cook at nightfall, I went along the river, crossed easily as it was hardly more than 2.5m/8’ at the deepest place, and was lucky to see by flashlight hundreds of Craterocephalus straminaeus, the so-called Strawman or Blackmast. 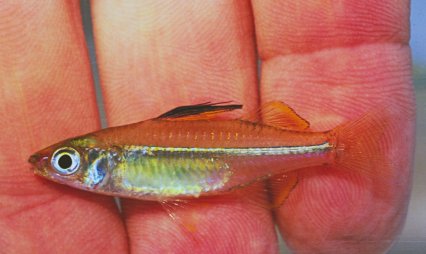 The first dorsal is also black, but not as extremely high as in the type, and the most remarkable feature was the neon stripe running from its gills into the caudal peduncle. 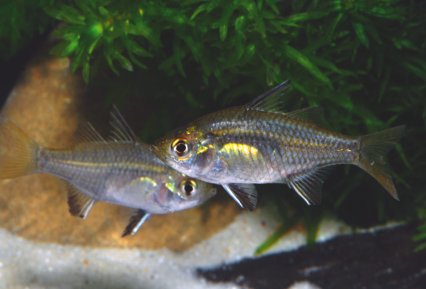 I also found some Northwest glassfishes (Ambassis species), which are still not described, and Mogurnda mogurnda, or at least fish that look similar (below). 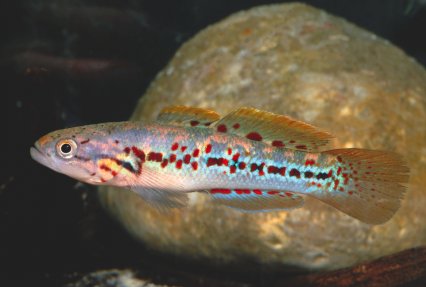 Three species are known from northern Australia, but one, M. adspersa, is limited to the eastern part of Australia and M. oligolepis is only known from the Kimberley region in Western Australia. 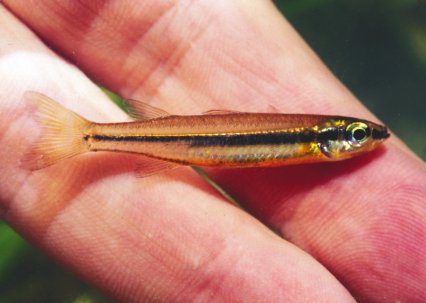 There were also many of a very small Craterocephalus species, an extreme yellow-golden coloured one, of which there are none similarly described from northern Australia. I found a similar one only on the Aru islands.

Next morning I saw Nymphaea violacea species growing in stagnant parts of this beautiful river, along with Eleocharis acuta, and in bays there was Eriocaulon setaceum, Najas tenuifolia and Potamogeton crispus. I then saw wallabies, a Sugar glider flying from one tree to another and Northern brushtail possum disappearing into the bushes.

We then crossed the Kakadu National Park on Highway 21 to Jabiru, on the way stopping at a tiny creek full of aquatic vegetation. There was Brasenia schreberi, Nitella penicillata, Myriophyllum papillosum, and the red M. salsugineum, Potamogeton perfoliatus and Villarsia exaltata, and what is probably Vallisneria caudlescens, a beautiful submersed red plant up to 60cm/24” that would be an excellent addition to the larger aquarium.

Along the edges there was Blyxa spp, Nymphoides crenata and floating plants, like Salvinia molesta. This place, called Plant Creek, resembled a real underwater garden, a gigantic shallow nature aquarium. 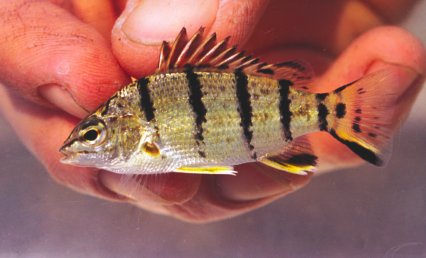 Another collecting spot needed a special permit to explore. This was at the border with Arnhemland, where the East Alligator river flows north into the sea. This clear river bed, completely covered with sand, is also a tourist spot and you can boat ride with a guide pointing out the dangerous saltwater crocodiles.

Naturally, swimming is prohibited here but I just had to go in, just to see how many of those man-eaters would attack me. None came… However, Bruce and his friend bellowed: "A poisonous snake is biting you underwater." In fact, while I was fishing along the edges, a Swamp eel (Ophisternon gutturale) was nibbling my feet, tickling them.

The East Alligator river is home to many freshwater species, of which some may enter the mouth where it becomes brackish. Of the many collected species, one which did strike me more than anything else was a Golden archerfish. 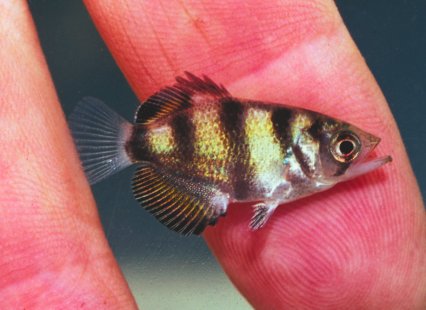 It looked somewhat like T. jaculatrix, but this species is white and black. The one I found here was jet black and gold — even the juveniles. I had never seen anything like this amazing beauty before. 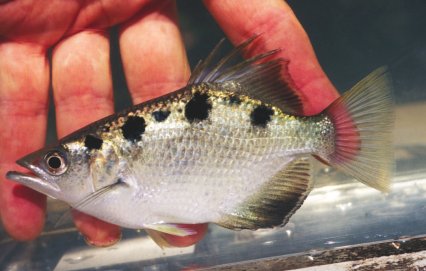 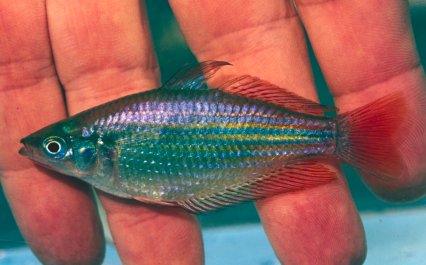 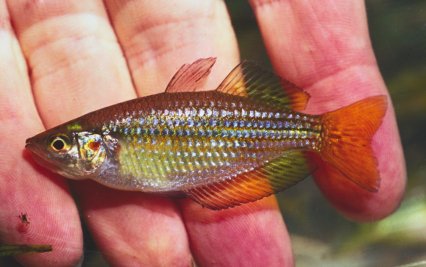 I also found the strikingly coloured Melanotaenia splendida splendida. The males had a very reddish coloration and the females a yellowish pattern. I even found some with typical rainbowfish diseases. 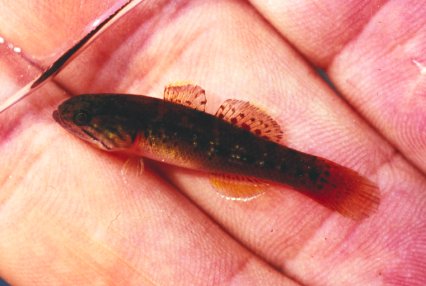 I came across Mogurnda here, a dwarf, and possibly not M. mogurnda.

This area of the world could throw up species of flora and fauna that were both surprising and beautiful.

At journey’s end we camped late, or better tried to camp, along the Mary river. While the others were putting up the tents

I ignored all pleas to stay out of the water, as it was full of crocs.

I didn’t listen, but when Bruce and his pal come to the edge to convince me to come out a big one came upriver, a saltwater croc at least 5.5m/18’ — and when both saw it they screamed.

I have never seen people pack so fast, throwing tents and equipment into the truck in panic. I could not convince them to stay, but I will go back to Australia some day — only this time alone, as I’m now convinced that these crocs eat only Aussies...