A trip in time: the cichlid hunters of Caquetá A historic cichlid-seeking visit to Colombia came up trumps when a new species was uncovered.

Back in April 1995, three friends and I flew to Columbia to search for new fishes, our main interest being cichlids. The last days of our trip were spent in the Caquetá-drainage, in a province named ‘paradise’ by its inhabitants. Here, we fished east and west of Florencia.

Some of our fishing locations we’d already read about, starting in the Quebrada Aguas Calientes — ‘the hot waters’ — a small river 28km west of Florencia; in some brooks between Belén and Morelia; and in the Río Montainita, some 5km from a town with same name. We also went east and fished around Esmeraldas.

At each site, the water flowed quickly but never warmer than 27°C. The pH ranged from 6.5 to 7, with the hardness barely registering at just 1°dGH/KH. The bottom of the rivers consisted of boulders, pebbles and sand, with some muddy areas full of dead leaves and some fallen trees here and there. The water was turbid (and colder) following rainfalls, clearing up in a few hours, and it seemed that the fish were quite used to these sudden changes. 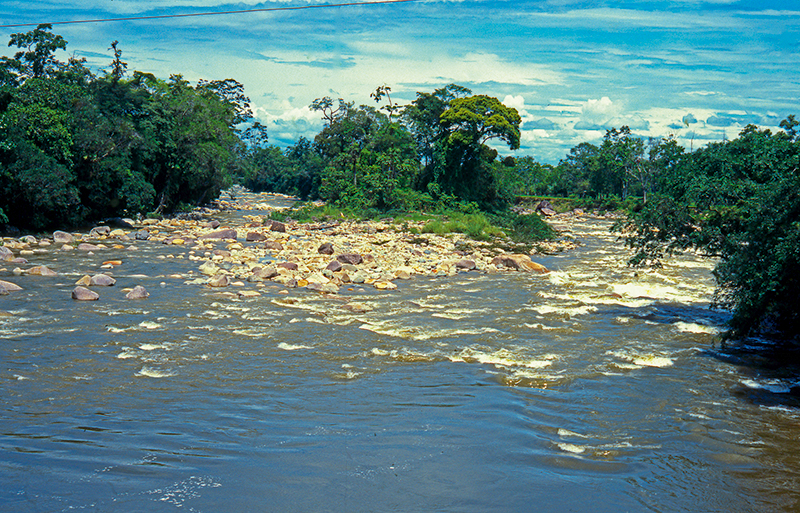 The fish-fauna of the Caquetá-province in Columbia seemed similar to that of the upper Aguarico- and Napo-drainages in eastern Ecuador, where I had already fished a decade earlier.

We had come to collect Caquetaia myersi and Crenicichla anthurus which we knew were in this area and were lucky to catch both on the first day. But there were also some surprises — a very big and colourful (and at the time still undescribed) Apistogramma, as well as an undescribed Heroini cichlid, and an undescribed Geophagus of the so-called surinamensis-group.

In the fast-flowing water, we detected some 5cm bottom-dwelling Characidium. They are able to remain stationary in the current, moving forward in a jerky way, using wood, stones and leaves as resting places.  In the free water, nicely coloured Astyanax bimaculatus of about 10cm were bustling about in groups, feeding on small invertebrates, detritus and the fresh tips of plants. As they are distributed from Panama southward to Argentina and have adapted to many different water parameters and temperatures, they are quite undemanding. In the wild, they start spawning at the beginning of the rainy season, so that their fry can find food easily. To spawn, males develop small hooks on their ventral and anal fins to ensure sufficient contact time with the females as they fertilise the eggs. 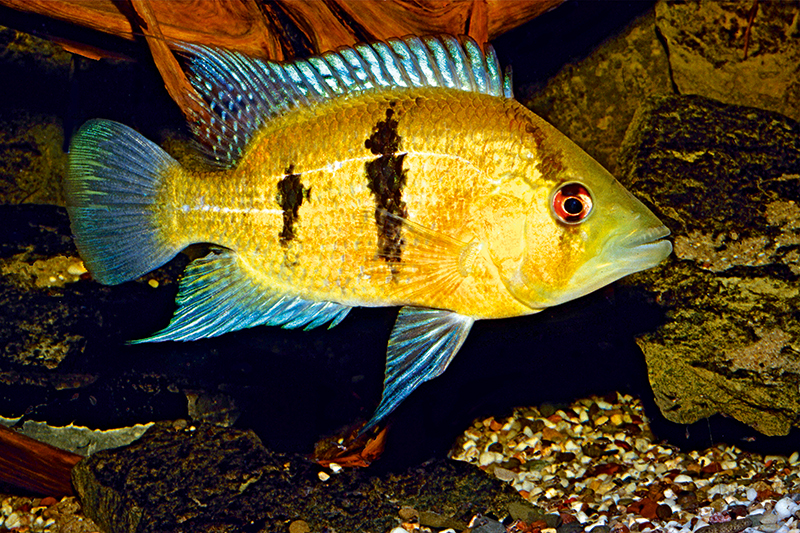 Nearly everywhere we found archaic ‘Trahiras’, as they are called by the natives, specialised lurking predators with sharp and pointed teeth — Hoplias malabaricus. They may grow to 65cm or so and are found close to the bottom, often lurking as ambush predators.

We also caught silvery Pimelodus blochii, a 35cm pimelodid catfish. It can survive in stagnant water where the oxygen is not sufficient because it’s able to take air from the water’s surface into its intestine which is rich with oxygen-extracting capillaries. It’s a greedy eater, swallowing any kind of food, even feeding on detritus when nothing else is to be found, and wanders upstream for reproduction. Fully grown females are believed to lay 50,000 eggs at one spawn!

Another pimelodid we caught (and found in the market) was Hemisorubim platyrhynchos, its species name referring to its flat ‘beak’. This shovelnose cat grows to 60cm total length and is distributed from the Orinoco down to the Parana. As it feeds mainly on fishes, its head is flat with a broad mouth, the upper jaw being shorter than the lower. Both jaws and its palate are toothed, and its eyes are placed so high that it can look about without lifting its head.

Last but not least — Synbranchus marmoratus, the Marbled swamp eel (but not a true eel), which becomes a confident pet, eating out of its owner’s hand. This highly intelligent, species is found all over South and Central America and can grow to 120cm. Even though it feeds on fish, you may keep it with bigger cichlids. Unfortunately, you cannot keep it with conspecifics, as it is too quarrelsome and snappy.

Synbranchus are able to breathe from the water’s surface. Their gill cavity can expand to the size of a tennis ball when filled with air. 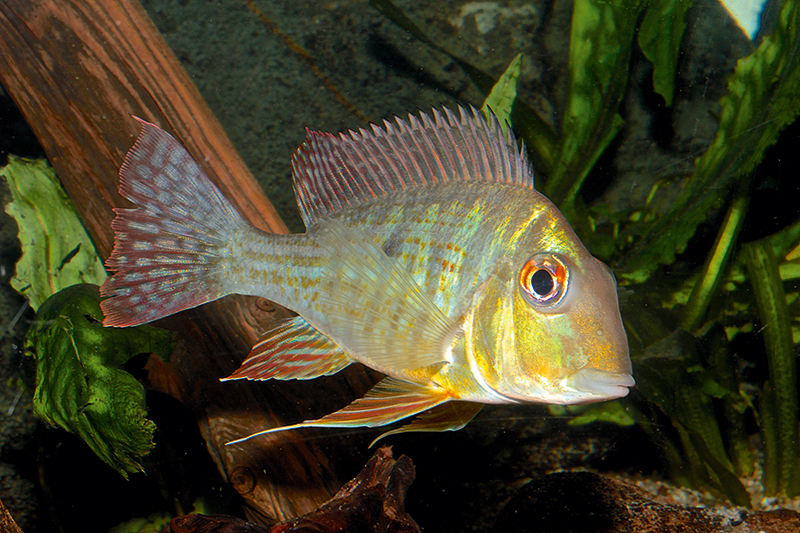 A young male Geophagus as caught by Uwe.

I cannot elaborate on all cichlids of the Caquetá, so I will only detail those that we brought home. The first was Crenicichla anthurus, an extremely colourful pike cichlid, especially in females. They show a reddish or pinkish abdomen and have several black blotches (sometimes in a row) on a conspicuous snow-white submarginal band below the jet-black border of the dorsal fin.

This species may spawn from just 12 to 14cm, when females show their nuptial dress and begin to dance in front of the males. They bend and twitch their red bellies to appease the males and to induce them to follow to a cave where they wish to spawn. They attach their eggs to the ceiling, and the clutch is never tightly packed. Although the eggs are adhesive, some of them fall down, possibly due to the vigorous movements of the spawning fish or the fanning female. She does all the fanning alone, protecting the eggs while the male patrols outside to see off intruders.

The young hatch at the end of the fourth or on the fifth day, according to temperature. Another four or five days later, both male and female accompany up to 300 free-swimming fry on their first outing. They defend them vigorously, becoming rather dull — along the body, a broad dark band appears, and the bright colours vanish. 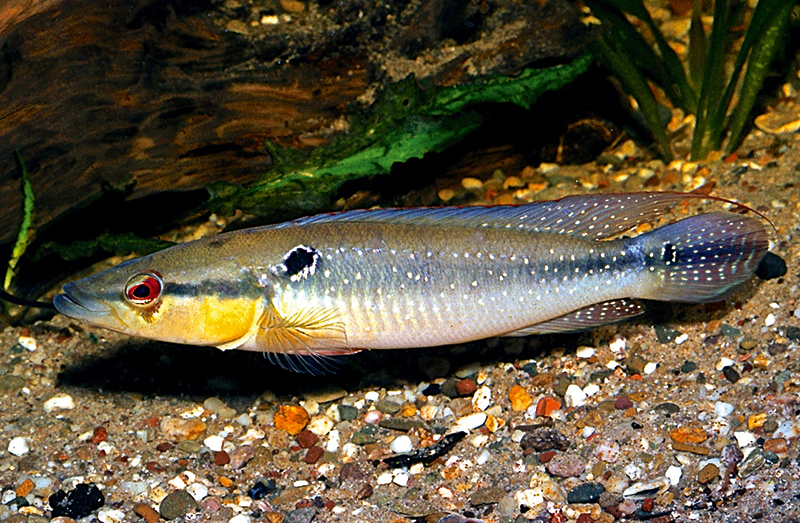 Next up is Caquetaia myersi. We had caught some in Ecuador in 1986, but had not been able to transport them. Now we found fry at Aguas Calientes and Montainita which could be taken home.

In our tanks, they turned out to be difficult, susceptible to diseases and to stress caused by other fish. Often they were frightened and difficult to feed — either they refused food, or ate too greedily. Most of the fry we brought home died, and finally there were only a few left.

As a result, I was pleased when my last two C. myersi turned out to be a pair. The male had a bluish hue, with blue ventral fins and the brown bars on the side and through the eye rather faint, the female bright yellow, with black ventral fins and strongly contrasting dark brown bars and dark markings in the dorsal fin.

They seemed to understand each other well, but hesitated to spawn until I put them apart from other big cichlids. Then they cleaned a flat rock on which they spawned, attaching hundreds of translucent amber eggs, which were rather small for cichlids of that size, so that the larvae started to hatch rather early, at about 72 hours or so. The pair hid them in a pit in the gravel, where most of the babies were eaten by a number of snails. The rest I raised separately, feeding them with Artemia nauplii. 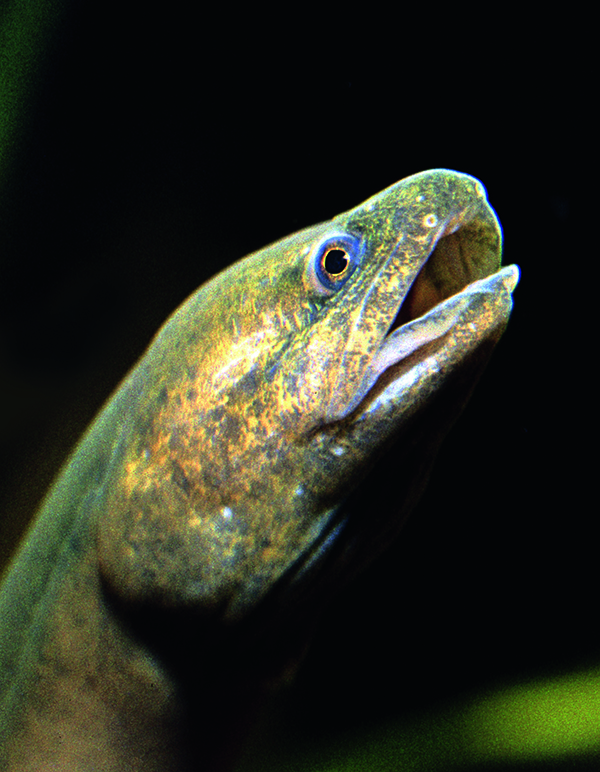 Synbranchus will fight their own.

The Apistogramma we found were at the time undescribed, but known within the hobby as the ‘Red spot apisto’. We found two different colour forms of the fish, now understood to be (and described as) Apistogramma alacrina.

The males we caught around Belén, Morelia and Montainita were up to 7cm long and bright blue, with a pronounced row of violet/red spots along the middle of the body. Females were bright yellow, with jet-black blotches in front and behind the ventral fins (in some individuals all along the belly), on the upper root of the caudal fin, and sometimes on the rear part of the dorsal edge. There’s one spot at the base of the pectorals which is so exceptional that in 2004 the ichthyologist Kullander decided to name them ‘alacrina’ —armpit-hair — in recognition of it!

As with many Apistogramma, dark markings were also found in the first rays of the dorsal and ventral fins and in the face, where a prominent stripe runs from the eye down and backward to the corner of the gill cover. Males we found near Esmeraldas had at least three rows of red spots on the body and were real beauties. The species spawned easily in water with a pH of 7.2, but never showed the bright colours in our tanks as in the wild.

It was a great surprise for us to find an undescribed Heroini cichlid which looked a little bit like a young Heros, but its big black spot on the body and its small mouth reminded us of the Central American Archocentrus genus, too. We preserved some fish material and it was later examined by Kullander, who described the species in 1996 as Heroina isonycterina.

For his description, he also used material from Peru, where these cichlids live in the Río-Corrientes-, Río-Pastaza- and Río-Tigre-drainages, and from Ecuador,
where they have been found in the Napo-drainage. This means that their distribution is restricted to the extreme western Amazonian lowlands. The Greek species name corresponds to the Latin word aequinoctialis — of equal nights — alluding to the equatorial distribution.

The females of my Heroina were easy to recognise, with a black spot in the dorsal fin. At a little under 1cm the fish started to parade, showing a pattern of vertical bars. They spawned on open surfaces, and their eggs were extremely small, but not very numerous. While their first attempts to spawn only resulted in fungus, eventually all went well.

At 26°C, the larvae hatched after about 70 hours and were hidden by their parents either in a tight gap between the stones or in a pit which was flanked by stones, where they stayed until they were able to swim. Five or five and a half days later, I noticed that the fry swam for the first time. They were small and kept close contact to the substrate that surrounded their nest, refusing to rise up into the open water. After another day they became bolder, hunting for Artemia nauplii. Today we know that this species will grow to a maximum of 17cm.

And there was still another new cichlid, which is still not yet described today. We caught this Geophagus sp. ‘Caquetá’ in the Quebrada Aguas Calientes and can say that it is different from all known Geophagus species by virtue of the numerous and tight vertical bars that run across their body.

Unfortunately, we were not able to find some fry, so we were unable to take home any live specimens. Two years ago I found some in the tanks of an importer from Holland, bought