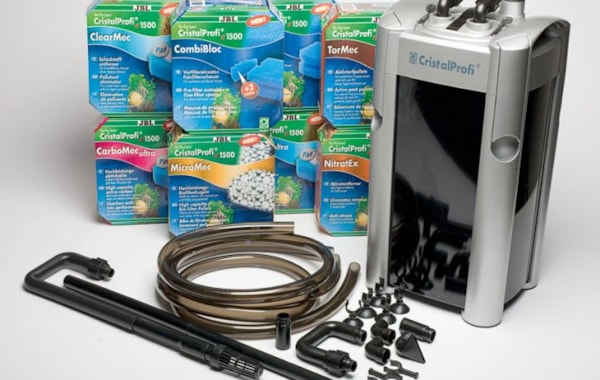 Matt Clarke answers some of the most common questions on choosing an aquarium filter.

Why do I need a filter?

A filter is essential for removing wastes produced by fish. Without one, the water would become polluted, poisoning the fish and causing them to either die or develop diseases.

How do they work?

Most filters work mechanically by trapping solid wastes so you can manually remove them later, and biologically where special friendly bacteria make toxins in the fish wastes into less harmful nitrates that you can remove during water changes.

Very importantly, all filters take time to start working, so they’re incapable of removing pollution right at the very beginning – you need to mature them first.

How do you mature a new filter?

We recommend the more modern ‘fishless cycling technique’ using a product such as Waterlife Biomature, which contains ammonia to act as a food source for the bacteria.

After you’ve set up your tank, add the Biomature according to the instructions, and then monitor the water using ammonia and nitrite test kits.

After a few weeks, ammonia and nitrite levels will have risen very high and then dropped to zero. When you add a small dose of Biomature without the ammonia or nitrite level rising, the tank should be ready for the first fish. This normally takes four to six weeks.

After this maturation period, your tank should be capable of removing the wastes produced by your new fish.

Can’t you add fish from day one instead?

Some people prefer to mature their tank by adding a few hardy fish such as Zebra danios, allowing their wastes to provide a food source for the bacteria.

Although this works, it exposes the fish to polluted water, so it’s not very kind. Then there’s the risk that you might be tempted to add more fish before the tank is ready, which will only increase pollution levels.

If you want to mature your tank like this, only add a few fish in the first week, feed them sparingly and don’t add any more until the ammonia and nitrite levels have risen and dropped to zero.

Between the end of week one and week four, the water will almost certainly be polluted and you’ll risk killing any new fish, as well as endangering the original ones.

What different types of filter are available?

The most basic and widely sold are internal power filters, which have a small water pump on top of a narrow box containing a sponge. These sit within the aquarium.

You might also see the more old-fashioned undergravel filters in budget tanks, or external power filters in the more sophisticated models.

How does an internal filter work?

An internal filter is designed to sit in the rear corner of the aquarium with the outlet just below the water surface. Some tanks, such as those in the Juwel range, come with fitted internal filters.

Water is sucked in at the bottom of the filter and drawn through a coarse sponge that traps debris. The sponge contains bacteria, which thrive in the polluted and oxygen-rich water passing through. They convert nasties such as ammonia into nitrite, and nitrite into nitrate.

How often should I clean the sponges?

Every couple of weeks you need to rinse the sponge in old tank water to remove the trapped debris, otherwise the flow rate will drop and the filter won’t remove as much waste.

If you find that it needs cleaning more often, it might be worth thinking about upgrading.

Can I rinse the sponge under the tap?

No! Don’t do this! Although the instructions might suggest this, it is an extremely bad idea.

Friendly bacteria residing in the sponge will be killed by the chlorine in tapwater, rendering the filter inoperable for a month or so while it re-matures.

Instead, simply syphon out some water from the tank and rinse the sponge in this.

What size filter do I need?

The packaging should tell you what aquarium size the filter is capable of supporting. Look for a filter that is capable of running a tank at least as large as yours, ideally a bit bigger.

If you keep messy fish, such as goldfish or cichlids, or you want to run a heavily stocked mbuna tank, you’ll need to consider upgrading to something more powerful.

How do undergravel filters work?

An undergravel filter is a slatted tray that forms a false floor, allowing a layer of gravel to be suspended above a water-filled space. One or more vertical pipes called airlifts (or uplifts) are attached to the plate, through which water is drawn using a powerhead or an airstone, powered by an airpump.

The suction created pulls water and solid wastes into the gravel, and provides a source of oxygen-rich water for all that beneficial bacteria.

The filter functions mechanically by trapping debris and biologically by acting as a colonisation site for friendly bacteria.

Are they as good as other filters?

Undergravels tend to be much more labour intensive to maintain than internal filters (if you look after them correctly), and can cause problems in planted aquaria.

However, they are cheap to buy and run, and have a much larger surface area than most internal filters.

This means that they are theoretically capable of supporting a greater pollution load once the bacteria have colonised the filter. But if not looked after properly, they can cause a number of problems.

What are the advantages of an external filter?

As the name suggests, external filters sit outside the tank in the cabinet below. Water is sucked out of the tank and enters the filter, where it is cleaned and then pumped back up to the tank.

External filters have much more media inside them than internal filters, so they tend not to need cleaning quite as often. They are also much more versatile, and there are lots of specialist media you can add to them to improve the quality of your water.

If you want a really good filter, or you intend keeping something more demanding, an external filter is a good choice. Of course, since they are more sophisticated, they also tend to be a little more expensive.

What are carbon pads for?

These inserts are used in quite a few different models of filter. They contain activated carbon (a charcoal-like material) capable of removing various chemicals from the water and improving its clarity.

Importantly, all products containing activated carbon have a limited lifespan (usually less than six weeks) and must be replaced when they reach the end of their use-by date, as they can leach various nasties back into the water.

What is a self-priming mechanism, and why might I want one on an external?

A self-priming mechanism is a device for drawing water from the tank into the filter so it can start pumping water back up to the tank.

Although it’s possible to run an external without one, these gadgets do make life a little easier.

What are the disadvantages of an internal filter?

Although fine for basic use, most internal filters house a relatively small amount of media and aren’t very versatile.

They tend to need more maintenance than externals and, arguably, they aren’t quite as good at providing top-notch water conditions, especially when you have a lot of fish in the aquarium.

If you’re buying an internal filter, always look for one with lots of filter media inside. The more media, the more effective and efficient it is going to be.

Internal filters are, however, cheap, easy to install and maintain, and perfectly adequate on small, lightly stocked tanks.

Is it easy to upgrade my filter later on?

Yes, but it’s important not to simply remove the old filter and replace it with the new one. If you do this, you’ll remove all of the beneficial bacteria. The new filter lacks bacteria, so you need to let it mature before replacing the existing filter. Alternatively, why not leave the two filters running together?

This article was first published in the 2006 issue of the Practical Fishkeeping Gear Guide.