Aquarium in a VW van! Some hobbies sit well together: fishing and reading, surfing and skateboarding, chess and vintage Claret... But what if your hobbies appear diametrically opposed, like fishkeeping and classic cars? It might appear that never the twain shall meet. But, in sunny Florida, Mike Wetzel found an ingenious way of blending his two interests.

Mike is a saltwater aquarium enthusiast and Dub devotee who is determined to bring the sea to his camper, rather than the other way around.

"I did it on a whim, really," says Mike, who goes on to explain that the idea came about because he wanted to decorate the showroom for the local car dealership he manages with a beach theme:

"We acquired a VW franchise and had plans to incorporate a mini Volkswagen museum with vintage Beetles and Buses and needed a centrepiece."

They wanted something which would reflect the Florida coastline, and even the fish in the tank are native to Florida’s sea water.

But before it could be pumped full of water, the 1970s VW bus required extensive work and preparation. They took on a man solely for the purpose of repairing the bodywork, and he devoted more than three months of full time work to get the van looking ship shape, and fully transformed from its initial sorry state:

"It was in black primer and would barely run when we bought it," Mike explains, "I was going to trailer it down, but one of my drivers wanted to take a trip down nostalgia lane and drive it from Daytona Beach, which is usually a two hour drive. However, it ended up taking him over five hours because the van couldn’t go over 50mph, nor did he want to go any faster for safety’s sake!" 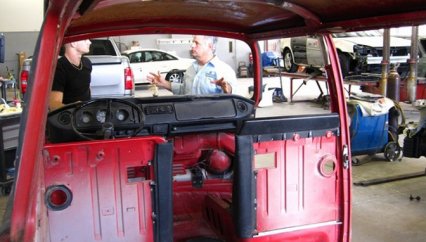 For the huge 800-gal custom made acrylic tank to be fitted into the van, the entire half side had to be cut out, and hinges were welded on to the roof to create a door. Using support mounts, and with enough hands on deck, the tank could then be pushed in and out of the van smoothly. Before the water went in, to endure the substantial weight, the rear suspension had to be reinforced with sections of 4x4 fitted under the axles.

The engine was removed to create enough space for all of the pumps, filters and sumps, which have been fitted on the van floor, where they are hidden. The tank itself is fixed 8" beneath the side windows, so that the finish is clean and what you see are the plants and the fish in all their glory, without any of the distracting mechanicals or engineering. 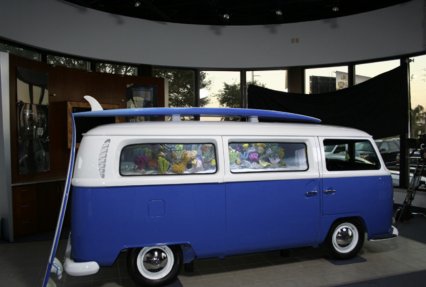 For the time being, the van has been disassembled but will be ready to take centre stage at the new Fort Pierce VW dealership when it is opened in March 2015. Mike is expecting a throng of visitors eager to have their photos taken sitting in the driver’s seat of the van. Luckily, without an engine, the van can’t be driven, so he’s not too worried about the threat of car theft.

Tara Gould is a writer, blogger and classic car enthusiast writing for VWHeritage.com