A reef tank full of colour The creators of the ZEOvit system that enhances the natural colour of corals in your tank reveal just a few of their secrets to Jeremy Gay.

At the end of 2009 Practical Fishkeeping brought you several stunning examples of reef tanks run on the fairly new, and some would say controversial, Ultra Low Nutrient System.

Many of you asked for more information and others raised questions about the long-term possibilities of such systems — so we went to the very top and interviewed the experts at German coral farm and reef product company Korallenzucht which invented the ZEOvit coloration system.

They answered our questions and sent us pictures of their own jaw-dropping 1.8 x1.8m/6 x 6’ wide ZEOvit reef tank.

So sit back and enjoy! 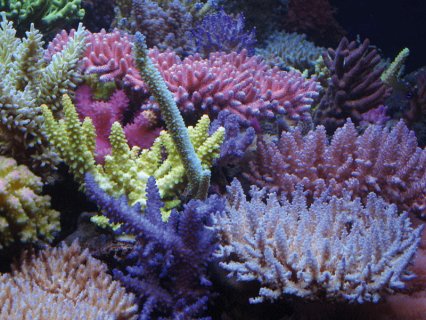 What we think
If pastel-coloured ULNS tanks are considered the epitome of excellence among the reefkeeping elite, this display must be the crème de la crème.

Hats off to Korallenzucht for raising the bar in coral coloration and not only sourcing and captive propagating some of the world’s most colourful corals but also for designing a complete system that not only maintains their amazing colours but shows them off at their best.Korallenzucht show us that reef tanks don’t have to be brown!

This example is particularly large and filling it is particularly easy as the company has a 30m/100’ propagation tank behind it in which corals are harvested. Yet it does prove that ULNS can be done long term and you could use the same principles in much smaller tanks to achieve the same results. 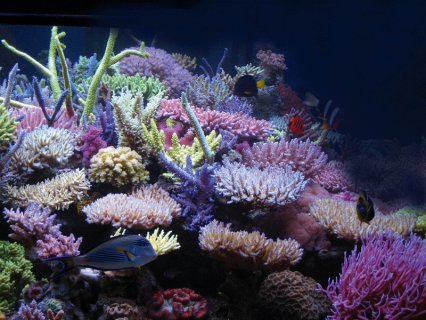 Expert Q and A
The specialists at Korallenzucht answer our key questions about ZEOvit, its development and offer advice for potential users.

Some people say the colours displayed are not natural.What’s your response?
We import and breed coloured corals, as the market demands coloured corals. Nobody buys brown corals!
We maintain coral coloration in the tank exactly as in nature on the reef and exactly how they arrive after import. No colours are forced.

How did you come about using and developing the ZEOvit method with zeolites?
Thomas Pohl tried to find a way to keep the corals in the coloration he received them in after shipment, as all products then on the market did not work. The ZEOvit system is a result of our practical work with corals over 20 years.

Why can’t you use freshwater zeolite?
All zeolites are different in the effect they create. We have tested many and found the perfect zeolites for our needs.

Have you experienced any problems along the way?
There were many problems some time ago, as previously no products were available which worked for SPS corals. Our products are the result of 20 years of practical research with tanks and animals and that’s why they have improved so much. At the moment we do not have any problems.

What advice would you give people who want a tank just like this one?
It is no longer difficult to have and maintain a great tank. We have produced a manual — the ZEOvit guide — in different languages which we provide through www.korallen-zucht.de.

Are there any golden rules for ZEOvit users?
One is to change water parameters slowly so that corals have enough time to adjust.

What are your plans for this tank?
Ultimately there should be two table corals for it, each 1m/3.3’ in size! One of our tables is now nearly 60cm/2’ in diameter, the other more than 30cm/1’. Both were frags, so we should see growth in another year.

Do you need live rock at all if using the full method?
Yes. In our opinion live rock is a good basis for a good tank.

Are there any organisms that won’t do well with this method, like clams?
We have mainly SPS, but also lots of LPS, soft corals, clams and other organisms in this tank. There are no problems with any of the inhabitants.

Thanks to Korallenzucht and ITC Aquatics for sharing what would normally be kept behind closed doors!

Check out these other ULNS systems:
Reef tank of treasure
State of the art ULNS