A breeding first: The Reedfish An historic breakthrough with the Reedfish! Ralf Britz and Ritva Roesler attempt to rear these living fossils.

The Reed fish (or Rope eel) of the genus Erpetoichthys and the bichirs of the genus Polypterus comprise the family Polypteridae — the most primitive of the ray-finned fish (Actinopterygii).

They are sometimes referred to as 'living fossils' due to a large number of primitive characteristics which are not present in the same form in any other of the 30,000 species of ray-finned fish. Most conspicuous features are their thick body armour of ganoid scales and paired lungs.

Rope eels are not common aquarium fish and kept only by a small circle of enthusiasts, but they are offered regularly in shops.

The same is true of their closest relatives the bichirs, although spectacular first imports of the species Polypterus teugelsi and P. ansorgii may have led to greater popularity of this group.

Despite continued interest among fishkeepers, bichirs have rarely been bred in captivity. The first success was that of Polypterus senegalus by Arnoult in 1964, a species spawned repeatedly since (see Hartl, 1981; Bartsch and Gemballa, 1992; Bartsch et al., 1997 and Schugardt, 1997).

Shortly after Arnoult’s success, a second species, P. ornatipinnis, was spawned by Armbrust for the first time (1966 and 1973) and bred subsequently by Azuma in 1986; Wolf, 1992; Bartsch and Britz, 1996. The third species successfully spawned in captivity is Polypterus endlicheri by Azuma in 1995.

While we have some information about the breeding of Polypterus, that of the Reed fish is unknown.

Erpetoichthys calabaricus was described in 1865 by Smith based on two specimens he obtained from Old Calabar in Nigeria. Smith, who named the species, used Erpetoichthys in publications in 1866 but pointed out that the name was preoccupied and proposed Calamoichthys as a replacement.

The latter name was used in several of his publications. In others, Erpetoichthys remained. The genus name Calamoichthys was used for the Reed fish until recently.

As Swinney and Heppel (1982) found, an article in the Daily Review fulfilled the criteria of the International Code for Zoological Nomenclature to make a name available.

This text covered a meeting of the Royal Physical Society at which Smith presented his description of the Rope eel, along with a short diagnosis of Erpetoichthys.

We would also clarify contradictory information about the maximum adult size of the Reed fish, which is given in numerous publications as 'up to 90 cm'. The source of this is unclear, but the largest specimens in museum collections measure 37 cm/15”. 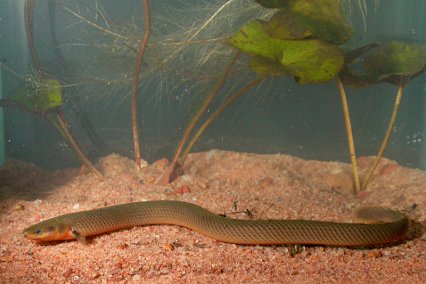 We speculate about the age of the eels when purchased but assume they were at least 2-3 years old. They mostly hid among the vegetation and caves we offered, and were visible mainly during feeding time. This meant more active fish species received more daily attention.

However, this changed dramatically when we discovered two eggs close to the front on the gravel that could only have originated from the eels. Was this true? Did we spawn Erpetoichthys for the first time? It looked like it… We were nevertheless surprised, because the parents were at least 12-15 years old!

An intensive search for more eggs discovered another three. All five were removed from the tank and transferred to large glass dishes which we had used previously to successfully raise Polypterus ornatipinnis eggs and larvae.

Egg fertilisation
The eggs were much easier to check there. Any larvae would be easier to feed in a controlled way and the dishes could be cleaned without much effort after feeding.

One day after isolation we found only two eggs were fertilised and had started to develop; the remaining three fell apart. The two hatched after three days and the larvae, which had a dark almost black pigmentation, closely resembled Polypterus.

The larvae initially lived off their yolk sac, but started to accept freshly hatched and thoroughly rinsed brineshrimp nauplii nine days after hatching. The two larvae then died without any indication as what went wrong.

After this we were eager to stimulate the parents to spawn again and used the Kirschbaum method, by which Professor Kirschbaum from Berlin spawned different species of mormyrids, the African elephant-snout fish which had been notoriously difficult to breed in captivity.

This method takes account of the fact that most fish species in the tropics spawn at some point during the rainy season when large amounts of rain influence the pH and conductivity of streams. It tries to mimic these changes by lowering the pH and conductivity over a period of a few weeks.
We applied the method, but without immediate success — the Reed fish refusing to spawn again.

Eggs galore!
We had almost given up, but on March 2, 1998, were delighted to find that our eels had spawned a second time! This time we removed about 250 eggs.

They then paused for four months and a new phase started on January 23,1999, with additional spawnings in February and March.

We now observed and even filmed the courtship and subsequent spawning. When male and females are ready they swim around with slow and graceful movements and wriggle together through dense bushes of Java moss.

The male is then very close to the female, almost touching her, and makes jerking sideways movements with his head towards her body. This stimulates the female. If ready to spawn she stops moving, almost exclusively in the aquatic vegetation. 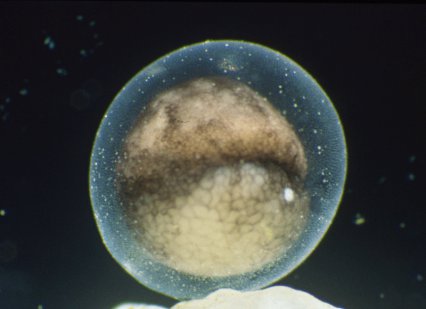 Egg development
After a few seconds the male disperses the fertilised eggs by quick, powerful sideways movements of his caudal fin among the vegetation where they adhere to moss with their sticky coat. This sequence is repeated until all ripe eggs in her ovaries are spent.

As with the first spawning we transferred all eggs into glass dishes where we checked development several times a day. They were spherical with a diameter of 2.1-2.6mm.

The yolk was separated from the egg surface by a 0.5mm wide jelly-like zone. The eggs had a single micropyle , the sole opening in the egg through which the sperm can enter.

The egg surface was densely covered by short sticky projections which secured it tightly to the Java moss we used as spawning substrate, but sometimes also to pieces of gravel. 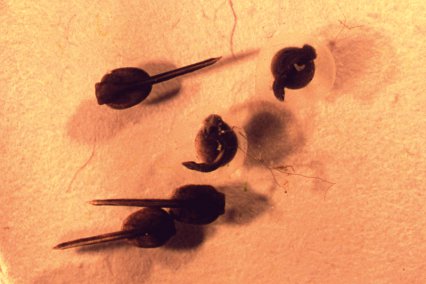 Eggs hatched on the third day after spawning and we now had enough larvae to study their development in more detail. The newly hatched larvae were almost black and had an unexpectedly short body for a Rope eel.

Similar to Polypterus larvae they had a large yolk sac and a pair of many-branched external gills on their gill covers.

They also used a pair of attachment or cement glands at the tip of their snout to attach tightly to the substrate and only moved when they were disturbed. A high larval finfold extended along the midline of the body and was interrupted by the anus.

After 13 days the yolk sac was almost fully resorbed and the eye had started to form.

At 19 days post hatching, at a length of 10mm/0.4” the yolk sac had disappeared and the larvae started to accept food items. As before, we offered newly hatched brineshrimp nauplii, once a day. Usually one hour after feeding we syphoned off all nauplii not ingested and replaced the water.

The first rays of the caudal fin started to form at 13mm/0.5” length. The first dorsal fin rays appeared later at around 20mm/0.8” and developed from back to front fish, so the first few were present near the caudal fin.

The eel-shaped juveniles were still very darkly pigmented. The first scales were present at around 30mm/1.2” in the tail region. The nasal tubes or tentacles also began to develop at this size and were clearly visible at 40mm/1.6”.

The largest juveniles we raised were 60mm/2.4” long and reached five months old when they died for unknown reasons.

Male death
At the beginning of 2002 we needed someone else to take care of our pairs because we were going to spend two years abroad. The following year were told that one male had died.

Only last year were we able to bring the eels back into our care and when we fished them from their tank we discovered only the two females remanded.

They now inhabit a 50-gallon tank along with two smaller and younger males which we recently purchased from an aquatic store in London. We have kept the females for over 15 years and they are probably at least 20 years old now — and we wonder if they are still reproductively active.

Age the key factor
We hope this article has encouraged other Rope eel enthusiasts to try to breed these interesting archaic fish. Age seems decisive for any breeding attempts with such eels or bichirs as polypterids only reach maturity after several years.

Anyone interested in breeding these fish should pay particular attention to the sexual dimorphism as explained in the main article to ensure that both sexes are actually represented in the potential breeding group.

This item first appeared in the March 2009 issue of Practical Fishkeeping. It may not be reproduced without written permission.