A beginner's guide to Madagascan cichlids 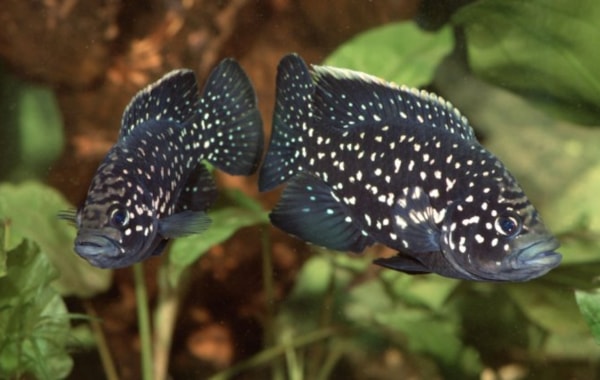 Jeremy Gay looks at an unfortunate group of cichlids, but one which excites both collectors and conservationists.

Get seriously into cichlids and sooner or later you will bump into the Madagascans. Medium to large in size, they look very different to anything else available and they have lots of visual appeal and plenty of stories attached, mainly to do with their conservation status.

Madagascar is a massive island off the coast of Africa, with lots of endemic wildlife, notably lemurs, chameleons, Baobab trees and little known fish. 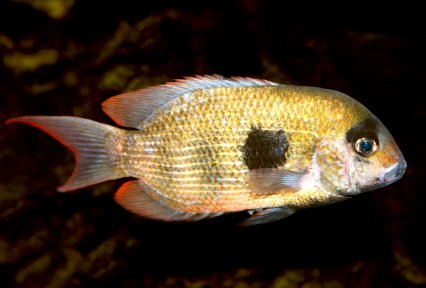 All wildlife there is under threat, however, from habitat destruction, deforestation, and human population pressures. On top of that the native fish are also threatened by introduced fish species, like Red snakeheads, which were introduced as food fish, but unsurprisingly get everywhere in the native freshwaters and feed indiscriminately on native fish.

The result is that many of Madagascar’s cichlids and other fish are now endangered.

Like the Victoria cichlids the Madagascans find their way into the aquarium supply chain first through captive breeding programmes led by universities and public aquaria. Spare stock are passed on to dedicated enthusiasts at first, who then pass them around through cichlid societies.

Eventually the fish find their way to breeders in eastern Europe and Asia before becoming available in the mainstream.

Just like the Victorians, although endangered in the wild if you buy them with a view to helping preserve the species, your individual efforts may be vain and your stock inbred, mis-identified and even hybridised. So, for now, buy them and enjoy them as ornamental fish. 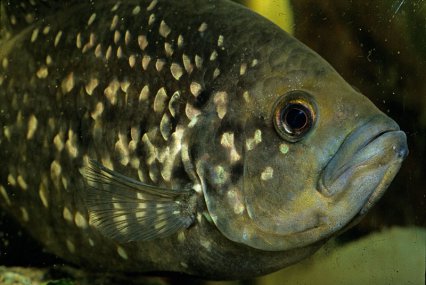 The genus that most pushes my buttons, and those of other fishkeepers, is Paratilapia. Its physical features are cichlid epitomised: large, thick set, big jaw and a look that borders on that of a marine grouper.

Get them in the right mood and they are jet black with either gold, silver or even turquoise spots, depending on species. All those masculine features aside, they are beautiful — one of the most beautiful of all the cichlids.

Paratilapia used to split into what we thought were two available species — P. bleekeri and polleni — and 15 years ago you would have happily had either.

Later on their names were revised, taking on the temporary names of Paratilapia sp. ‘large spot,’ (what we knew as bleekeri,) and sp. ‘small spot,’ (formerly polleni) though, even then, spot size can vary greatly and unless you are in the very fortunate position of having several adult Paratilapia which are viewable and comparable by eye, will you be able to determine a fish with small spots from one with larger spots? 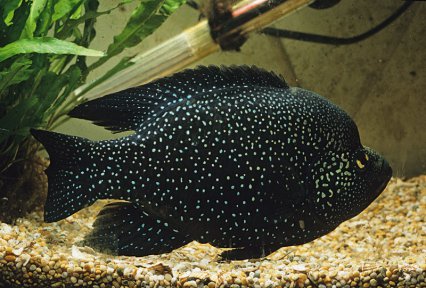 Fishbase recognises just two species – P. polleni and P. toddi — although cichlid expert Tom Williams told PFK in 2010 that there were at least four species in the hobby — sp. ‘Andapa’, ‘East Coast Small Spot’ (pictured abpve) ‘Fianarantsoa Green’ and Paratilapia bleekeri proper. Confused? It would appear the experts are too, so for now just make sure you don’t pair off and breed two of unknown origins. 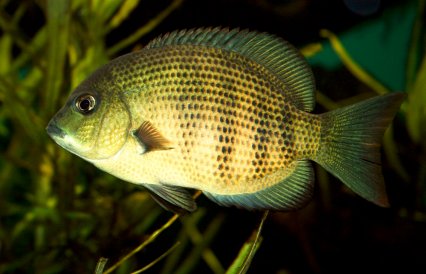 Apart from Paratilapia you may now also find Paretroplus maculatus and menarambo (above) and others, and a few Ptychochromis species. 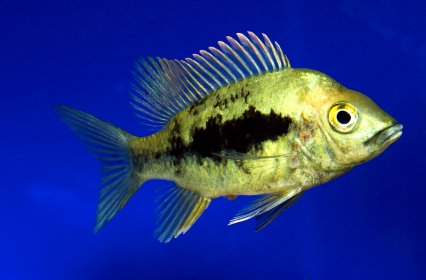 Paretroplus are strange, looking more like a marine fish than a cichlid, and Ptychochromis (pictured above) resembles a Central American cichlid. I wouldn’t describe either Paretroplus or Ptychochromis as beautiful — more like alluring — although a much bigger draw is tracking these down in the first place, working out what you’ve got, then breeding them. Madagascans still only represent a tiny percentage of cichlids in the hobby, appealing to those who say they are keeping ”rare” fish. 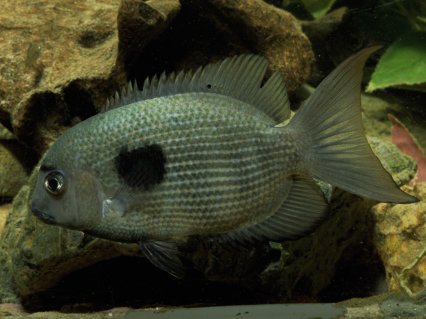 Paretroplus range from 15-45cm/6-18” depending on species and are territorial, so need huge space and are mostly kept by public aquariums.

Ptychochromis get to 15cm/6” long, though again need lots of room, and all must have well filtered water (external power filters are good) and regular water changes to keep nitrates low.

Information on parameters is sparse, although a temperature over 80°F/27°C is good to keep whitespot at bay and my friend used to breed thousands of Paratilapia in the soft tap water of Wales. That pair was kept in a 1.8 x 0.6 x 0.6m /6 x 2 x 2’.

Décor should be robust and most would take the natural route of wood and rocks, sand and gravel, as décor. 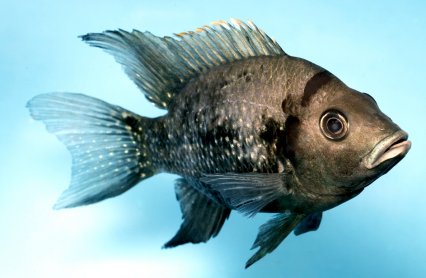 Paretroplus eat live plants, but you’ll probably get away with Java fern and Anubias with the other two genera.

Paratilapia are predatory, so no small fish as tank mates and although all three genera could be mixed with cichlids from other parts of the world, like South and Central Americans, would you want to run the risk of losing such an important fish if fighting broke out?

Note also that Madagascans are slow growing and long lived, so not fish you can grow on, spawn then move on to the next challenge within a year or two. A previous PFK editor had a group of P. bleekeri for 13 years, and, as far as I know, they never bred.

They will accept any food from flake and bloodworm when small, to cichlid sticks and pellets when adult.

Paretroplus will benefit from lots of greens in their diet, like algae wafers.

When they spawn, Paratilapia produce eggs in a loose, gelatinous mass, before raising them in the normal feisty cichlid manner once the fry hatch and become free swimming.

My friend’s pair shared their 6 x 2 x 2 with an Oscar and other fish, which they allowed to inspect the egg ball whenever it wanted too.

I told my friend to write to a cichlid expert at the time who told him he was doing everything wrong. We laughed at that, as he brought hundreds of juveniles into my shop on a monthly basis and at the time was the only person I knew who was breeding them. He couldn’t stop them breeding!

Madagascan cichlids come from ancient lineages, however, and slow growth, several years until sexual maturity and maybe the odd pair saying “hey, come and look at my eggs” to a passing red snakehead can’t be doing much for their survival in a natural habitat that’s changing very much for the worst.