A tropical tank outdoors? All year round? In the UK? Nathan Hill meets a couple from Kent who prove it can be done!

Positioning a tank can be crucial. Beginners’ books stress avoiding windows, and keeping clear of banging doors, or placing where children or pets can topple it.

So when a tank’s just too big for the owners’ house, there’s only the one option — get it into the garden and address a whole new list of concerns. That’s exactly what two PFK readers have done with their gigantic outdoor aquarium.

The first thing that occurs when talking of an outdoor tank is that it might just be a glorified pond, filled with weather-resistant goldfish, or even grandiose Koi. Yet this outdoor project, in Maidstone, Kent, is brimming with tropical favourites — from leg-length Fire eels to shoaling Severums and Tinfoil barbs, plus a few other notable varieties in between. 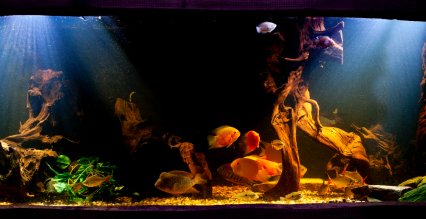 The tank is an upgrade from a previous outdoor tank and this was of a more manageable 1.8m/6’ length. The original had served the role well, but wasn’t in the right place, tucked to the side, not quite visible from the vantage point of choice — a garden-based hot tub in which the owners can relax in the evening with bubbles and wine.

When the opportunity arose for a new, mammoth 2.4 x 1.2 x 1.2m/8’ x 4’ x 4’ aquarium, it was snapped up. The hardware is ancient by aquatic standards, having been up and running for more than 20 years. The former keeper had created it to house his Red-tailed catfish (Phractocephalus hemiolopterus), but by the time he’d departed the hobby the tank was only home to dozens of guppies overjoyed at the space they’d been allowed.

The new owners, Steve Fitzgerald and Nichola Graves had only just returned from a holiday in Devon when the tank became available at short notice. A flatbed lorry was hastily hired and a journey to Norfolk followed. It took eight people to load, unload and position the tank.

Although glass fronted, the framework is stainless steel. It even came with a steel frame to stand it on, but this was discarded in favour of a custom-made base. When empty the set-up weighs in at around a tonne/2,200 lb.
Once filled there’s almost 3,500 l/770 gal inside, bringing the overall weight nearer to five tonnes/11,000 lb — around the same as a Minke whale. On concrete supports, this is a tank going nowhere in a hurry. 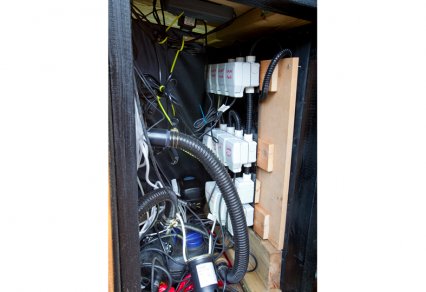 So how is an outdoor aquarium, especially one this size, heated and kept stable? Part of the answer involves two gigantic heaters, and as well as having a 3kw (3000w) in-line titanium heater, there’s a supplementary 3kw immersion titanium heater too, much like those found in domestic heating supplies.

However, heating is only half the picture, and clever insulation ensures temperatures don’t suddenly drop.

Space blankets
The back and sides are shielded by 7.6cm/3” thick fridge insulation encased in a purpose-made wooden frame.

The lid has been altered and now consists of 10.2cm/4” insulated panels, using both roof insulation and those space blankets so familiar to outdoor survival enthusiasts.

The panels are close fitting and remarkably weighty, creating a seal across the top that allows neither condensation nor heat to escape.

All this has the effect of keeping the tank at 28°C/82°F whatever the weather. Initially, when the tank was filled it was brought up to 25°C/77°F and left overnight without heating to gauge any drop potential. In the event there was only one degree of change.

The front trim was another custom addition once the tank was finally in position. Using Red cedarwood from a local timber merchant, a window frame was constructed to avoid colour clashing with the decking into which the tank was placed.

At about £700, the tank, which was initially spotted on eBay, seems a real bargain — especially when you consider that the original owner had spent almost £2,000 in putting it together 20 years previously.

Things start to add up when filtration is considered. The heavily customised filter is fed by a 10,000 lph pump, turning over water three times an hour. Water leaves the tank through a gravity feed at the base and is initially pushed by the pump through a 6,000 l/1,320 gal capacity pond filter.

This is filled just with mechanical, foam media and also carries a 13w ultra-violet clarifying bulb.

Next, water moves through the inline heater before moving into a 227 l/50 gal capacity acrylic tank. It is pushed from the base upwards, through layers of bioballs, alfagrog, several more fine sponges, as well as Jap matting. On top of this sits a layer of activated carbon foam, as well as loose bags of carbon.

The water finally moves through ultra fine polymer wool before being dispersed back into the aquarium through two inlets, positioned at either extreme. 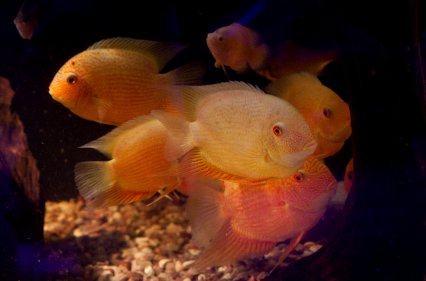 Air blower
To increase aeration, there’s also a pond specification air blower, feeding six ceramic air stones: one at each corner of the tank and the other two in the biological filter.

A smaller 3,500 lph pump draws water to push it through the custom-built undergravel filter on reverse flow. This helps to keep fine solid debris in suspension, making it easier for the larger filter to remove particulate wastes.

Lighting comprises six 45w Juwel tubes, powered by Arcadia 39w twin ballasts. Evenly spread across the tank, these struggle by day but bring out real effects by dusk. In a combination of four white tubes and two colour enhancers, they help bring out some of the colours on the fish, as well as casting haunting shadows due to the aquarium’s unusual depth.

Two armoured cables bring in enough juice to power everything. Electricals have been tidied in a weatherproof, custom cabinet next to the tank, so everything is easily accessed when needed.

All in, inclusive of tank price, it’s estimated that around £3,000 has been spent so far. Yet as a focal point goes it’s a worthwhile feature, although you’d have to be a real fanatic to take things this far. 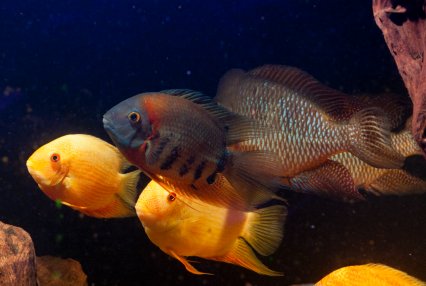 What’s in the tank
The first impression is that this tank is understocked, but then you realise the fish are just doing the rounds, swimming into the obscured edges, and others are hidden among the large pieces of decoration.

Severums dominate and the two golden, the six red spotted and the three wild greens make up the largest collective of one species. The Gold severum have made repeated breeding attempts, each time digging holes and cleaning patches of rock, but each time have abandoned the nests. 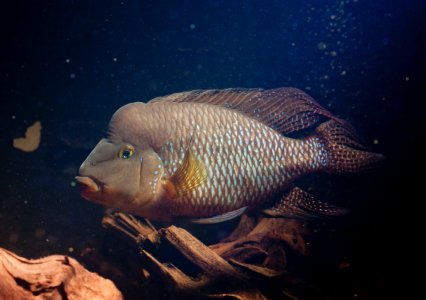 They’re not the only cichlid representatives, with a large pair of Geophagus brasiliensis occasionally coming into view, and one has a damaged snout as a result of frequent sparring.

Less obvious are four Geophagus surinamensis, which spend much of their time grubbing the substrate, but they drift by every now and then. In tow are three Jack Dempsey cichlids (Rocio octofasciata) with deceptively strong colours that struggle to break through the ambient daytime lighting. 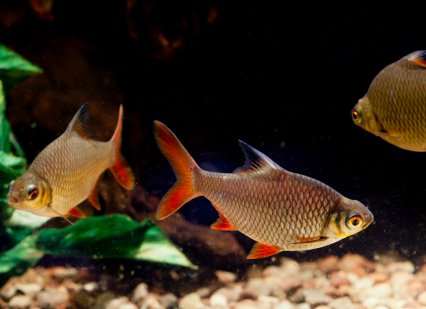 Movement is provided by six Tinfoil barbs (Barbonymus schwanfeldii) which retain their shoaling instincts and look happier than the usual sad affairs doomed to dormancy in an undersized aquarium. 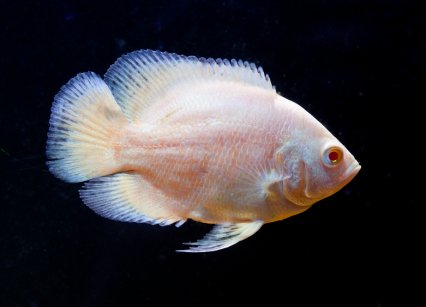 Biggest eel
Most prominent of all and interactive at the surface are two juvenile Oscars (Astronotus ocellatus). They follow any humans, becoming excitable when a hand drifts close to the feeding port cut into the hood.

Least visible is the largest fish. The Fire eel (Mastacembelus erythrotaenia) is the biggest I’ve have seen in private or public aquaria, easily longer and thicker than my leg, but his shyness meant we only caught glimpses — even when food was offered. Normally he is hand tame, feeding from his owner’s fingertips, but photography flashes and roaming hands unnerved him.

Almost as reclusive is the Jaguar catfish (Liosomadoras oncinus) which appears only when a snack is offered. He shares alcoves among the wood with another armoured cat, the Royal panaque (Panaque nigrolineatus) and they spend most of their time with only tails or fin tips showing from crevices.

There are also six Hypostomus suckermouthed catfish and an albino bristlenosed Ancistrus. These do a moderate job of keeping the front pane clear, which is a blessing as manual cleaning is not a lighthearted chore with glass this size.

Two plump Pictus catfish (Pimelodus pictus) behave much like the Tinfoil barbs in taking advantage of generous swimming space. To lend variation to the bottom dwellers, there are six bulging Clown loach (Chromobotia macracanthus) which are skittish but well fed.

Once all stock is taken into account and growth rates considered, it becomes apparent that the tank is actually going to be brimming once these fish reach adult potentials — and I look forward to returning to see the Clown loaches once they start to grow more than 25cm/10.”

See some of the other tanks in the Your Tanks section.

Or if marines are your thing, why not take a look at some of the other fabulous reef tanks featured on the PFK website: