Once reefkeepers have progressed through their early days in the hobby, the hotchpotch mixtures of fish and invertebrates most start with give way to some form of specialisation.

Many become captivated by colourful, small polyped stony (SPS) corals, while others prefer an aquarium demonstrating the dazzling display that can be achieved by soft corals.

But less frequently seen is a tank featuring large polyped stony (LPS) corals, even though this group combines a magnificent colour range equal to that of SPS, with the movement and stunning shapes that make soft corals so endearing.

It seemed appropriate then to investigate why, although they are so attractive, LPS corals are not more popular.

Chatting with Richard Hinchcliffe, it was easy to see how more than one fellow refkeeper might be easily swayed from a fixation with Acropora or displays of soft corals to one of an attractive, multi-coloured array such as this. 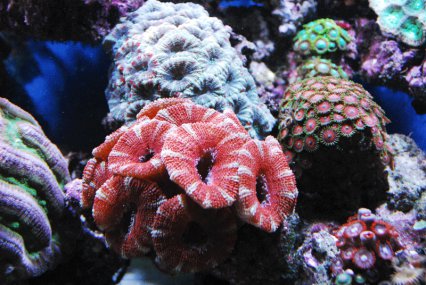 According to Richard, however, LPS corals are really hard to find and when you do track down a dealer, their scarcity value is reflected in the price – some small colonies costing up to several hundred pounds.

He explained: "Most LPS enthusiasts resort to specialist retailers. I am also fortunate in belonging to a small group of other LPS buffs and once a supplier is tracked down it's often possible, depending on which LPS family group is involved, to divide up a colony and share the cost between three or four of us.

"While I like the colours of SPS corals, they lack the movement and continuous changes in shape found with many LPS corals. Take the large Open brain coral in the centre of the tank. At times it will fully extend its polyps and seem to turn itself completely inside out. When you see a coral do that it's unbelievable and for me, it's their main attraction."

Richard has set out his tank to fully exploit the sheer diversity of his subjects. The shape really lends itself to the kind of display he has developed. The long shallow design fits the compact shape of LPS corals really nicely. 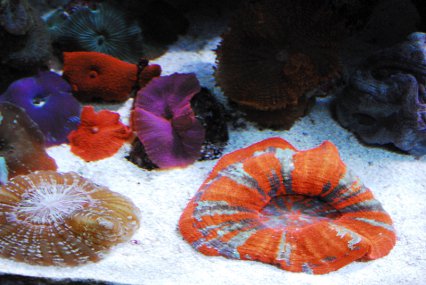 "One thing you have to remember is that LPS corals need plenty of room," Richard reminded me. "If they aren't isolated from one another, you can have problems with territorial aggression as they have really long sweeper tentacles which they can turn on neighbouring colonies.

"The more invasive species will deter the growth of less aggressive species. What's more it can be easy to misjudge a particular coral species and decide it's not likely to be aggressive and then find, following a night of silent battles, that all your favourite corals around it have been attacked.

"Bubble corals are the worst as they can extend stinging tentacles up to 15cm/6" from the main colony." 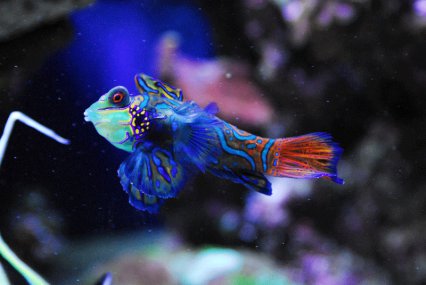 A single external handles biological filtration, aided by a powerful skimmer. Richard has modified the skimmer by removing the prongs from the pump feed impeller and fixing a pad of Enkamat to the impeller shaft with nylon fishing line.

"This improved the action of the skimmer and there are no problems with clogging using Enkamat as a substitute impeller drive," he explained.

Lighting is pretty standard with two 250W metal halides, two 90cm/36" fluorescent actinics and six blue LED 14W strips. The halides are rated at 20,000K, giving a blue end to the spectrum. This is a good decision, bearing in mind that LPS corals are generally found in nature away from the shallows, due to a lack of resistance to heavy wave action, and are located at 10m/33' or more in depth. This is the reason red is a prominent LPS colour, as below 10m/33' red is soon filtered out by the water's increasing blue cast and looks black, acting as camouflage.

Richard's water circulation ensures a high turnover (around 38 times an hour), but does not create the strong water movement that these corals tend to dislike. The greatest amount of movement is created by a 4,500 lph pump used for bottom scouring. 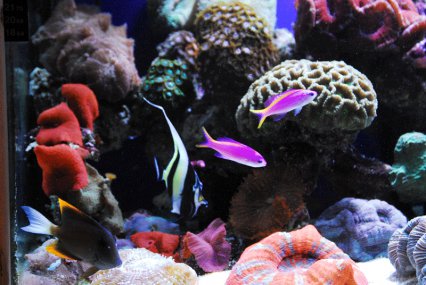 Richard did have problems with nitrate which increased to 25ppm. He put this down to flake food lodging in the sand at the base of his live rock and causing decay. He resolved the issue by lifting large areas of the living rock above the sand substrate using 5cm/2" sections of black tubing and directing the flow from the larger pump.

Richard's biggest regret is downsizing from a previous tank that was twice as large. "The problem, apart from lack of space, is that small systems are not usually wide enough to allow a nice, deep reef slope. A tank needs to be at least 60cm/24" wide to obtain a good effect. No doubt in the future I will trade up to a larger system." 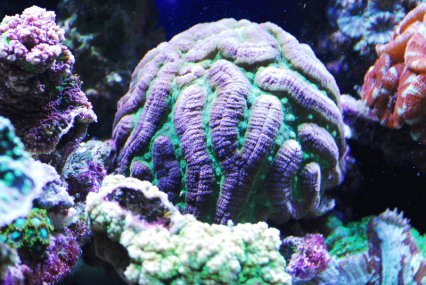 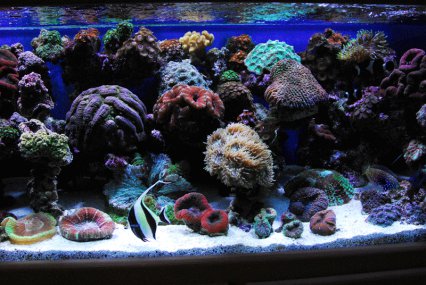 Check out some of our other reef tanks in this section:
Glen Gardiner
Mark Howarth

This item first appeared in the July 2009 issue of Practical Fishkeeping magazine. It may not be reproduced without written permission.