George Farmer gets a rare interview from the Polish aquascaper, Norbert Sabat.

Most aquascaping enthusiasts will have heard of Norbert Sabat.  He is well known among the aquascaping Internet community and has scored consistently high in international aquascaping contests.

Norbert’s trademark, for me, is his use of domineering hardscape (rocks and wood) that is clearly influenced by Takashi Amano’s Nature Aquarium concept.

With only five years in the aquascaping hobby it is remarkable to see the standard Norbert is already achieving, with his first layouts being very impressive too.

This layout is a typical Nature Aquarium style composition with a beautiful combination of fine green textures and bold hardscape selection. The muted colours of the rasboras add a hint of needed colour without being too gaudy.

The open sand foreground is used effectively with intermittently planted hairgrass providing a very natural and wild appearance. Moss, Java fern, Bolbitis and Anubias give the very mature and old-world effect that balances perfectly with the remaining planting and hardscape. This is Nature Aquarium, through and through.

Norbert gives us an insight into his aquascaping philosophies in this rare English interview. 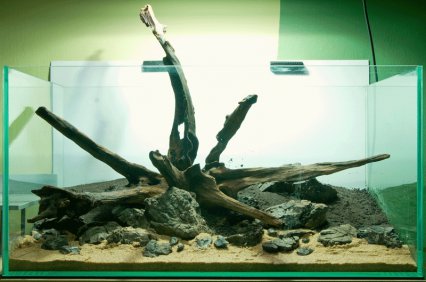 What inspired you to create this aquascape?
For a very long time I was searching for big, long, ADA-style branchy driftwood. When I eventually found some I quickly came up with this layout. There was not much inspiration in particular; I just wanted to incorporate Java fern (Microsorum) in an effective manner.

How much time did you spend maintaining this aquascape?
Usually I spent 30 to 40 minutes once a week changing a third of the aquarium water, cleaning the glass and maintaining the open sand foreground.  A couple of minutes a day were spent adding liquid fertilisers and fish food.

You appear to be influenced by Takashi Amano’s Nature Aquarium style.  What do you think he has done for the hobby?
Mr. Amano opened our minds and enabled many of us to incorporate nature into aquascaping, with so much more detail and three-dimension appeal than the older Dutch-style layouts that were a green/red ‘wall’ of plants.  I would say that Mr. Amano was for aquascaping, like Michelangelo or Da Vinci was for art. There were many artists before them, but they changed the world of art forever, like Mr. Amano has changed the world of aquascaping.

How old is this layout and how long did you keep this aquascape running for?
The final photo shoot was done at around the seven-month point. For me this is very old, as I usually like to run my aquascapes for about four months. However, due to a lot of shade-loving and slower growing plants such as Microsorium and Cryptocoryne the layout was allowed to mature for longer to allow them to grow sufficiently.

What advice do you have for newcomers to the planted tank and aquascaping hobby?
Firstly, learn patience. Many newcomers wish to create an aquascape very quickly and think that in two to three weeks it will be superb. This is a big mistake. Make small steps. Let the plants grow before pruning and re-planting. Let the plants mature before pruning to allow the aquascape to build up.

Secondly – if you choose stones and wood for a layout always consider the size of the aquarium and how the hardscape and plants work together. Choose your hardscape very carefully. Always look to nature to see how grass grows around stones and now moss grows around roots. Nature is the perfect teacher.

Don't start with a lot of light, ie. over three watts per gallon. That is asking for trouble. Plant very heavily from the outset and use lower lighting levels for the initial few weeks.

Poland is becoming very well known for its aquascaping talent. Why do you think this is?
I think the aquarium hobby has been very popular in Poland for a good while (30-40 years). Many people were keeping fish but few with aquatic plants. Back then we lived in the Eastern/Soviet Bloc and aquarium equipment like the first Eheim Classic filters were like props from Star Wars! So we made a lot of DIY gear.

At the end of the 1990s when the Internet was becoming more popular, the aquarium hobby became more accessible allowing the aquascaping community to grow.

I think that Polish people are very artistic in general and have a strong kinship with nature. We have many forests, swamps, lakes etc. and a lot of them are unique from Western Europe. We have a few very talented Polish aquascapers that are a hit amongst the Polish community.

What is your opinion on aquascaping contests?
In previous years I really liked contests and entered a few myself. I wanted to compete with other aquascapes and see how my work compared, good or bad. In 2008 I changed my hobby and right now I am more interested in photography than aquascaping.

All the ‘contest stuff’ is not so magical for me any longer so I will not be entering the IAPLC 2009.  Sometimes I have a feeling that we enter contests only to show off or feel better by boosting our egos.

Don’t take me too seriously though; I just don’t feel the need to prove anything to anyone else, only to myself. From now on I will be only showing my aquascapes on my own website. Of course, I have a planted tank but right now I more enjoy walking with my camera in the mountains. I’m searching silence… 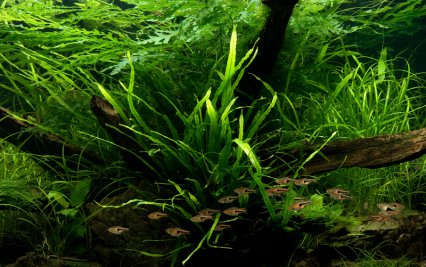 This item was first published in the March 2009 issue of Practical Fishkeeping magazine. It may not be reproduced without written permission.