George Farmer interviews Neil Woodman, one of the UK's finest aquascapers who is influenced by the legendary Takashi Amano.

I have known Neil Woodman for some five years now through various Internet forums and the UK Aquatic Plant Society. He has produced several remarkable aquascapes and this one was runner-up in the 60cm/24” and above category in 2008’s PFK aquascaping contest.

Neil uses ferns and mosses to excellent effect to create the illusion of a very mature layout when in fact this set-up was only a few months old when photographed.

The crypts are a clever addition, providing an interesting balance of broader textures with a hint of colour without being too distracting or gawdy. The open sand foreground is a relatively new idea in aquascaping that is very low maintenance when compared with carpeting plants.

Overall, this is superbly executed nature aquarium style aquascaping, as pioneered by Takashi Amano from Aqua Design Amano (ADA).  Neil is also a big fan of the ADA product line and uses them almost exclusively in this aquascape.

In my face to face interview, Neil reveals how he got hooked on the hobby….

What inspired you to create this aquascape?

The main thing that inspired me was the use of a sandy foreground.  For years I’d been convinced a planted foreground with carpeting plants such as Glossostigma was essential for a planted tank. I had always strived for one, but with mixed results.

The plants either wouldn’t grow at all in my earliest attempts, or would succumb quickly to algae. After a while however, I did succeed using the Estimative Index (EI) method of fertilisation.

Then I spotted some pictures of the ADA Nature Aquarium Gallery online. I realised they’d started to showing tanks with sand foregrounds. I hadn’t even thought about this before, as I’d not seen foregrounds like that in any of Amano’s books. It struck me as a brilliant idea and immediately realised the advantage over a planted foreground — there’s far less maintenance.

They also look superb and you don’t have to worry about algae taking hold on your foreground plants. The other thing I learned from Amano was the use of wood. I wanted something initially with branches protruding from the water surface — again from what I’d seen in the ADA Gallery.

The problem was that the hardscape materials to achieve this simply weren’t available in the UK at the time. Only recently Redmoor wood has become commonly available and just lately ADA Old Iron wood too. Midori wood and Sumatra wood are also useful and now available. Most folk in this hobby are, of course, passionate about fish and will spend a lot to get the best specimens. For me it’s the same with hardscape materials. 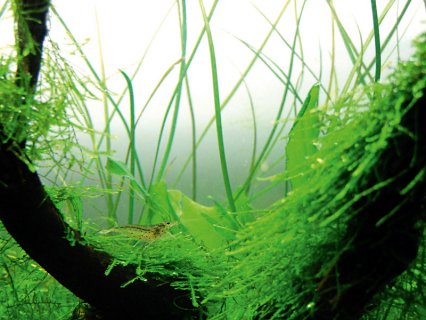 Did you have a clear idea of how the aquascape would look when complete, or did it evolve gradually?

I knew what elements this aquascape needed: good wood selection and composition, sand foreground, narrow-leafed Java fern, moss and crypts. So it was really important to make sure I worked these elements into the layout.

Initially I wanted crypts and no stem plants in the background, but I couldn’t get it to look right in the beginning, as crypts are slow growers. The only crypts I could think of for a background were C. balansae which would be too overpowering for a 60cm/24” tank. I tried the stem plant, Juncus repens, which was good a first, but wasn’t overly fond of the leaf shape once it had grown in.  I found it looked a bit messy, sending shoots in different directions.

After a couple of months I removed the J. repens and tried Vallisneria nana. This was better and created a natural grown-in look in a relatively short space of time.

What did you learn from this aquascape?

It was my first proper try at a tank using the full ADA substrate and liquid fertiliser system. I had tried it before in a much larger tank and it did work well, but I was never happy with the physical appearance of the larger tank. I wanted a rimless brace-less tank with suspended lighting and clear silicone.

I decided on an opti-white 60cm/24” tank with the equivalent glassware, lily pipes and diffusers; my reasoning for downscaling being less cost and maintenance. So, in short the learning process worked with the ADA product line — all of which I find very user-friendly.

I also arranged the substrate in the familiar sloping formation to the rear, but found out after a while I hadn’t piled the Aqua Soil high enough at the back, as over time it compacts down. It’s very difficult to build up your substrate after a few months when your plants are fully established so this was always an issue.

How old is this layout and how long did you keep this aquascape running for?

It was set up initially in December 2006 and I stripped it down at the end of September 2008, so effectively 22 months.

What advice do you have for newcomers to the planted tank and aquascaping hobby?

I recommend using a solenoid and pressurised CO2. It may initially be costly, but works out cheaper in the long run and is much less fiddly than DIY yeast set-ups. Plant heavily from the start with good quality plants. Stock lightly with fish, but have plenty of algae-eating shrimp.

Don’t kid yourself that hi-tech planted aquaria are cheap to set up!  Most recently I have spent as much on plants and hardscape for a new set-up as I did when buying live rock for a reef aquarium several years ago. I also advise spending out on the best possible aquarium you can afford.

Read up on the techniques and methods on the various discussion forums and UKAPS is a good place to start. Also look at the ADA Aqua Journals. Even though they’re Japanese the pictures speak for themselves and, along with the catalogues, they are a constant source of inspiration. Amano’s Nature Aquarium World books are wonderful too.

Lastly, I think it’s easy to get bogged down in the technical side of the hobby and I sometimes forget that sense of excitement which got me into planted tanks in the first place.

Fishkeeping Answers, one of PFK’s sister magazines, ran an issue in 1993 on an African river backwater set-up that inspired me to take up the planted tank hobby. I’m always looking to recapture that that magic feeling... 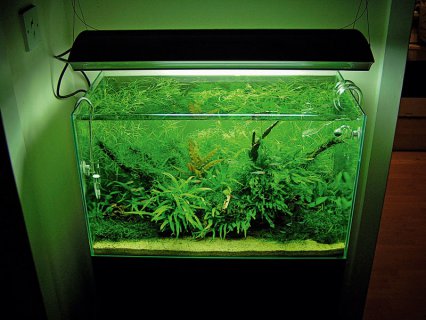 This item first appeared in the January 2009 issue of Practical Fishkeeping magazine. It may not be reproduced without written permission.