We speak to Lee Nuttall about his latest cichlid community tank.

We covered your earlier tank last year. Is the tank still the same?
Since that interview, my fish stock has been moved around slightly with a few new additions. These include Vieja synspila, Vieja bifasciata and a lovely Herichthys deppii pair. Moved, are the 'Cichlasoma' salvini and 'Cichlasoma' pearsei, however these maybe going back into the tank again.

Some fish will be permanently removed to make way for new stock, but this hasn’t been decided yet.

The aquascape hasn’t changed much, but a lovely large piece of oak wood was added to give shape to the display as well as cover for the fish.

Small branches from an oak were added to give the effect of wood penetrating from the surface. 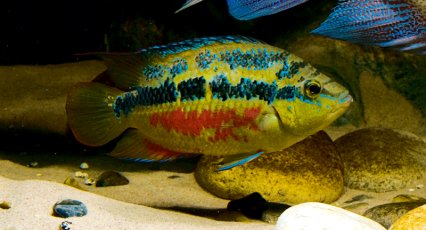 Both of your tanks have a similar look, with a Back to Nature background, mixed substrate and a natural looking selection of smooth rocks and branches. How did you set up the second one?
All the wood was sourced from the same types of tree, being oak and beech. Worn river rocks and children’s playpit sand is added. I had quite a few small cobbles placed around the larger rocks and near the base of the background, giving a very natural effect.

You’ve mentioned on the Practical Fishkeeping forums that you’ve set up another large tank. Can you tell us more about this set-up?
Work started on the tank around November 2009. I had been planning it for some time, but, due to an accident, the project had to be put on hold.

The planning of the tank was done much the same way as the first one, which included a breeze-block stand and a marine plywood base.

I had a very good deal on a damaged Back to Nature Amazon background from a local fish shop. The defect wasn’t a problem as it was in the place where the background would have to be cut.

Tank dimensions are the same, but due to the background having a few wide spots I finally decided having the tank built 1.2m/4’ wide. This would give me plenty scope to add larger cichlids.

The guys did another fine job building the tank on site. This enabled me to drop the background in before the bracing was fixed. The background was fixed in much the same way as the other tank, modified so that I could run the filtration system behind the background.

The pumps simply draw the water through the sponge media and back out via the spray bars. I’ve found this to be a very effective method of biological filtration.

How do you get the background to blend in so well with your decor?
The rocks I use can vary a lot in shape and texture, but it’s impossible to get an exact match to the rockwork on the background. When newly set up the rocks may look a bit odd, but once algae starts developing on both rocks and background the illusion is complete as the colours will look similar and blend together better.

The wood was a surprising fluke. Once soaked it takes on a deep colour that matches the colour of the background very well.

Weathered dead wood is good to use. Note that the wood isn’t rotten, as there’s a difference. As the pieces were large, I soaked them in very hot water in the bath. They are scrubbed and rinsed with a pressure washer. The wood will float for some time, but to overcome this — after being happy with the arrangement — I siliconed it in place.

Rocks are bought from the stone merchants. A good one will label its rocks as being fish safe or otherwise. The rocks are simply scrubbed in hot water, which removes dust and loose debris.

Playpit sand was used for the substrate, this being simply washed the same way as for other substrates available.

To give the sand texture you can add very fine grade pea gravel — and this also gives a very natural look. 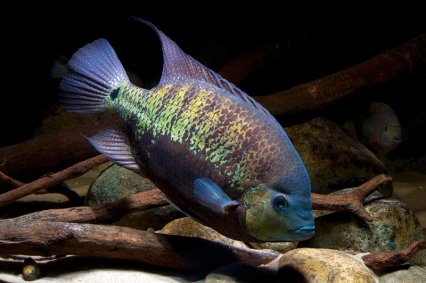 What fish do you keep in the second tank and how do you find the time to maintain these giant tanks?
I have a lovely pair of Vieja regani , Astatheros (Amphilophus) robertsoni group, Thorichthys ellioti group and the pearsei pair, subject to any changes.

I’m dedicated to my fishkeeping and routine maintenance is part of the package to which you must be dedicated.
It’s not as laborious a task as you may think and only takes around an hour to complete. Look after your fish and they will reward you with healthy bright coloration and maybe spawning activity.

How did you mix the fish? Did you put them altogether as youngsters, or have some been introduced later?
Both really. I have to say that I’ve never introduced fully grown adult fish into an established tank — they have all been juveniles. My new stock will be juveniles so the larger, established fish don’t see them as a threat. 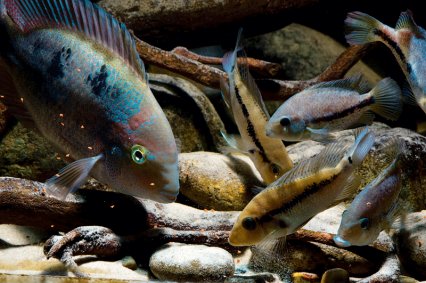 How do you keep them looking so good? What’s your feeding regime like and how much water do you change?
Proper care and making sure fishes aren’t overstocked are the keys.

I believe offering variety to the feeding regime is also very important. This ensures vitamin requirements are checked and feeding habits aren’t kept the same. We’ve heard many stories of fish being hooked to just one food.

Water is changed twice weekly, around 50% in total. Plenty of water changes keep fish healthy and make them grow.

Have you had fish spawning in the tanks?
Quite a few of my fish have spawned, mainly the Herichthys deppii pair and the Vieja heterospila .

How do the other fish handle it when there are brooding parents getting territorial?
Due to the large size of both tanks I believe spawning aggression has been kept to a minimum. I’ve recently had a few close calls with the Herichthys deppii pair, but have managed to intervene and solve the problem.

On the other hand the heterospila pair are quite the opposite and haven’t showed any worrying aggression issues. Central American cichlids can be so diverse in their behaviour.

You’d probably not get away with this in a small tank. What’s the smallest size you’d recommend for keeping Central American cichlids?
Tank size is dependant on which genus of cichlids you wish to keep. Paratheraps and similar larger species should be kept in a 16m/6’ tank minimum, with a width at least 0.6m/2’ Smaller species like Archocentrus, Cryptoheros and Thorichthys can be kept comfortably in at least 1.2m/4’. The bigger the better really, as this will ensure less aggression issues, especially when community set-ups are involved.

Your Herichthys deppii are lovely and rather uncommon. How did you get hold of them and what are they like to keep?
The parents of these fish were originally collected by Juan Miguel Artigaz and Rusty Wessel, on a field trip to Rio Misantla. Rusty spawned the fish and a lot were passed around in the hobby.

Quite a few F1s were sent over to keepers in the UK and I was lucky enough to get my pair from Ross Evans who runs Oddball Express.

These are extremely prolific breeders and now the UK is over-run with deppii. The upside is that this fish is easily available again. They are great fish to keep, quite peaceful and display great coloration when spawning.

You’ve now got two giant tanks. When will number three be appearing?
Not just yet. I’m burned out at the moment. I do plan to have another tank, perhaps only 1.8m/6’. This will mainly be for breeding certain species that can easily be swapped for something different. I would like to keep as many different cichlids as possible. 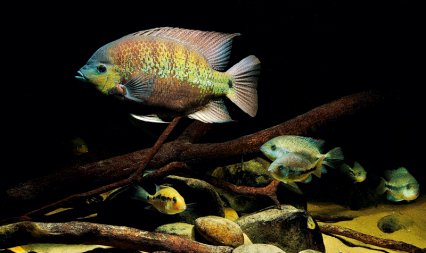 Fishkeeping cv
Name: Lee Nuttall
Age: 37.
Location: South Staffordshire.
Occupation: Self-employed.
Number of tanks: Two.
Favourite fish: Vieja argentea.
Pet hate: I’m not really a fan of hybrid cichlids like flowerhorns. I don’t really see the point, especially the confusion they cause to A. trimaculatus. Also breeders who knowingly sell hybrids as pure fish. There are so many great pure cichlids out there to keep and preserve for future generations of  fishkeepers.

Check out Lee Nuttall's other aquarium.

This item was first published in the October 2010 issue of Practical Fishkeeping magazine. It may not be reproduced without written permission.