For how long has this marine tank been set up?
This has now been running for some two years. It was built on site and took around a week to fill with RO water. Growth has been unbelievable for a two-year old tank. The corals double in size in about a year, although I do pump lots of calcium and magnesium into the water, along with iodine.

What do you like most about it?
Just sitting back watching the tank gives me so much pleasure. The way the 30-odd tangs interact and swim in shoals, the smaller fish how they have their little place in the tank, and then the big monsters — the Atlantic blue — they just come out and swim, pushing some aside. I do like the gobies and wrasse you don’t see all the time. Just looking at the tank, something will normally catch your eye, and an algae blenny will pop out and have a look at you! 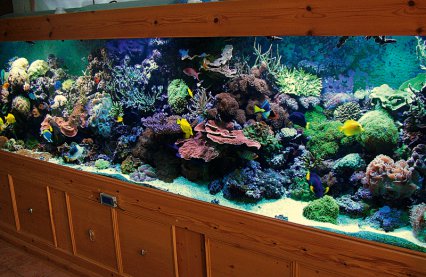 How would you improve it?
I would like to see the corals grow into each other and tangle round — without any stress, of course. I’d also like to start collecting some of the rare or harder to find corals. Fish wise, just a couple more tangs — the Gem and the Tri colour — and that will be my lot.

What was the hardest part of getting the look right?
The rocks! With over 1000 kg of rock and around 800 rocks in the tank it was OK at first, but when I started to put the facing rock on, it became a nightmare. Whatever I did, it never looked right.

Looking down into the tank I placed it where I thought it looked good, but when I got off the ladder to look from the front it looked terrible. So I was up and down a lot.

Having someone there helped, so a big thanks to Jason, as he helped me with the set-up from the woodwork to the filter room.

What inspired you to create this style?
I do like lots of tanks, but it being a long aquarium I couldn’t really have anything else. I have already changed it several times and I’m sure I’ll change it again. I wish it was a little wider so there was more space between glass and rocks to give a better visual appeal

How much did it cost to set up?
I’ve stopped counting! With the extension, I would say I’ve probably spent upwards of £35,000. But don’t forget there’s a lot of filtration on this tank and that alone must have cost around £10,000. 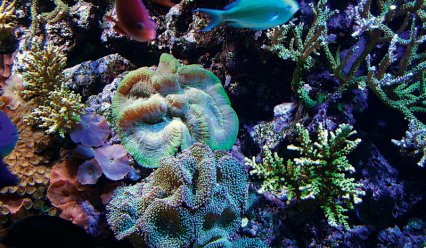 Fishkeeping CV
Name: Glen Gardiner
Age: 40
Location: Norfolk
Occupation: Logistics
Number of tanks: One main tank and four frag tanks where all my bits go.
Years of experience: 12+
Favourite fish: Mandarin. The colours of this fish are awesome! I’m lucky enough to have a pair and able to watch their courtship dance.
Pet hate: People who don’t look after their tanks. These guys can give you so much pleasure if you make the effort. They don’t ask for much!

This item was first published in the May 2009 issue of Practical Fishkeeping magazine. It may not be reproduced without written permission.