Not everyone has the ability to partner ideal community fish with stunning tank layout, but Gary Nelson pitches it just right. Nathan Hill witnesses a 'marriage' made in heaven.

Are you an aquascaper or a fishkeeper? This question arises frequently in my circles, to the point where I barely notice when I ask it myself. Yet it always appears worded in such a way as to suggest that the two fields are mutually exclusive.

If proof was needed that the two terms can indeed be harmonious, then it’s embodied in Gary Nelson’s striking Juwel Trigon 350. Here, the intelligent blend of community fish and breathtaking layout create more than the sum of their two parts. 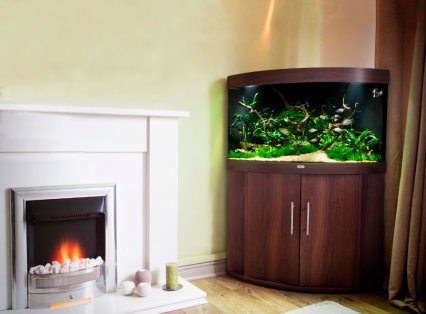 Community tanks have their detractors. Some complain that it’s hard to keep fish happy when they come from slightly different habitats. Yet I’d invite anyone making such a claim to take a good look at the fish Gary keeps. They’re immaculate and among the healthiest I’ve found on any reader visit.

Gary is a more recent fishkeeper. He started just two years ago with a BiOrb before moving on to his first planted tank — an Aqua One corner design that took him on a fast learning curve of flow requirements in planted aquaria.

The BiOrb was actually the idea of Gary’s partner who fancied a rounded aquarium. After a stammered start, Gary took to Internet browsing, learning more about plants and their requirements. He changed substrates, added some Amazon swords and had success in this limiting ‘no tech’ tank.

He soon felt he’d outgrown what he could do with the set-up and took the next step. The planting seeds were sown, even though Gary had initially entered into the hobby because he’d wanted fish, not the associated greenery.

From there he moved on to a Juwel Rio 180 and laid it out with rocks and grasses. It was set up for just two weeks before Gary wanted something bigger and more spectacular. 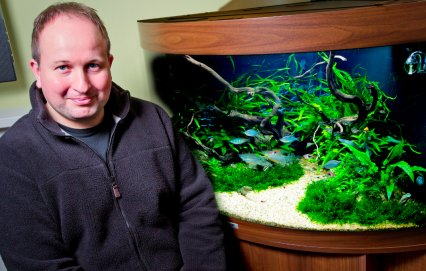 The tank featured here has been running for a scant five months. The first thing he did with it was to remove the integrated Juwel filter system and install his own, for the sake of adequate flow rates.

Upping his game, Gary rigged up a G6 external canister filter — and that’s something he’s quick to recommend to other budding aquascapers because of its ease of use. Aside some early impeller issues that needed to be resolved, the filter has run smoothly ever since.

Unlike some planted tank fans, Gary hasn’t felt the need to boost his lighting to any 'supernova' levels. All the foliage in here is happily bathing beneath the glow of the standard Juwel T5 fluorescent tubes in daylight and nature varieties.

Some of his little touches are truly superb. The lid of the tank was confronted by a Dremel to make an opening tidy enough for Gary’s external piping. As an extra, to keep surface film at a minimum, he has also incorporated a simple skimmer at the top.

The return pipes for water flow are connected to a set of ‘double duck bills’ like on a Fluval aquarium — the kind found in the Studio range of tanks. These give Gary an ideal point of water re-entry, as well as giving him near complete directional control on where the flow goes.

Heating is controlled courtesy of an inline 300w Hydor, so the tank itself is gloriously free of clutter and piping.

Any pipes that do remain have been painted with black Crayon and, combined with the chalkboard paint he used to darken the two rear panels of glass, it’s hard to spot anything that isn’t either a fish or a plant in there. It’s all very well thought through. 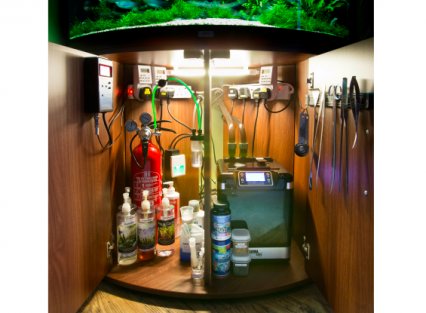 The cabinet beneath is a work of creative art. Here you find the filter, CO2 system, timers, plant foods, tool kit, timers, alarms and more.

Gary uses a fire extinguisher for his gas source, opting for a 2kg size connected to an Aqua Essentials Easy Aqua solenoid and valve.

This feeds into an UP inline diffuser connected to the G6 piping and set to give a dosage of two to three bubbles per second. 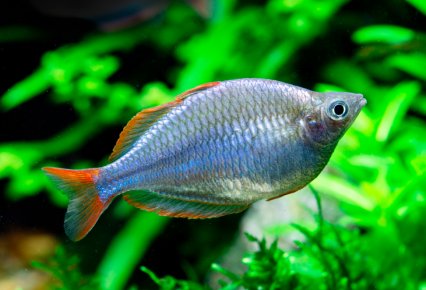 It stands to reason that he’s connected all these devices to timers so that they come on and off while he sits and enjoys the view, worry free.

For late night viewings there are also four moonlight LED strips, timed to come on for three to four hours each night, giving Gary a twilight rendition of his work.

For extra security, Gary uses an Aqua Digital pH probe which indicates a near constant pH level of 6.45.

Everything is arranged tidily to make life easy, with a couple of oh-so simple ideas that make life even easier!

The cabinet doors, for example, are connected to switches that turn on some small, domestic 15w fluorescent tubes at the back, making everything clearly visible. A magnetic strip that one might use with kitchen knives sits on the inside of one door, keeping all of Gary’s planting tools together in one handy place.

For such a striking effect, there’s actually not a huge range of plants in this set-up.

Dominating the rear is an abundant growth of Microsorum pteropus sp. 'Needle', poking all of those filamentous fine points through the wood.

The foreground is dominated by thick growth of Vesicularia 'Christmas' moss that has been tied on to slate.

Breaking up the foreground shape, a small number of Staurogyne repens thrust upwards a couple of inches. Lower down at the rear, some Anubias barteri 'Banzai' help to plug lower gaps.

One front corner is dominated by Cryptocoryne wendtii, which Gary describes as his most difficult plant. 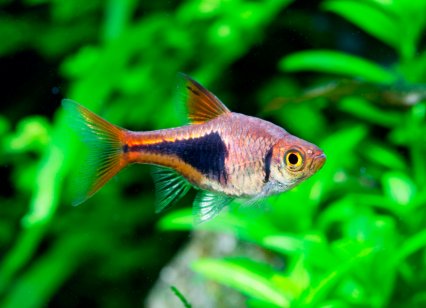 Finishing off the scape, a single Aponogeton lurks in one shadow, and centrally — albeit early days — a tiny fragment of Hydrocotyle sp. ‘Japan’ looks ready to start some explosive growth.

Decoration is taken care of with a mixture of Redmoor root, and Seiryu stone. Traditionally, Gary has only used wood, but in this tank —and with a tilt of the hat to UK aquascaper Mark Evans — stones have made an appearance. 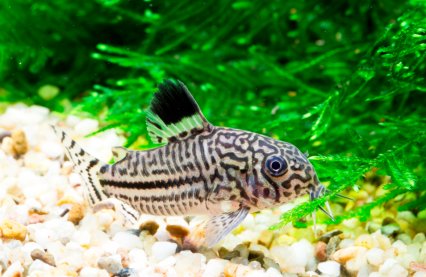 Keeping the tank looking this good takes Gary around an hour and a half each week.

It receives a weekly 50% water change, with replacement water prepared the night before, dechlorinated and heated in a water butt ready for use.

The moss is syphoned through weekly with a gravel cleaner and the gravel gets syphoned fortnightly.  At the same time, the glass is wiped. Though there were some early hints of black spot algae trouble, these were soon brought under control.

Not that Gary is overly panicky about a little algae build-up. As he sees it, an aquascape is like an indoor garden and, as he so eloquently puts it: “You never have a garden without any weeds.”

Feeding the plants is a matter of using an Estimative Index dry salt set from TNC. Gary doses 20ml of the macro and trace mixes on alternate days and 15ml of Aqua Essentials’ liquid carbon daily. 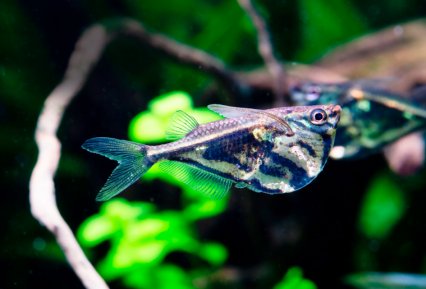 Unfortunately, when photographing Gary’s aquarium, we managed to startle the inhabitants and upset one of its key features – the neat layering effect of the fish.

When we arrived, the fish had aligned themselves perfectly. The seven Marbled hatchets (Carnegiella strigata) sit just beneath the surface of the water, their deep bellies just about touching the domain of the 40 False or Green neon tetra (Paracheirodon simulans).

Straight underneath the Neons, the punchy oranges of ten Harlequins (Trigonostigma heteromorpha) create a bright streak which then paves way for the bottom, subtle, shoaling layer of 15 Rummynose tetra.

Taking up residency of the lowest levels of the tank are four Corydoras trilineatus on patrol, accompanied by four Otocinclus dwarf suckermouth catfish.

A few bold fish add punch to the static layers. A pair of Betta patrol all levels, the male maybe the most brazen I’ve met, squaring up to the three M. praecox rainbows and even wriggling his fins at the two passing M. boesemani. 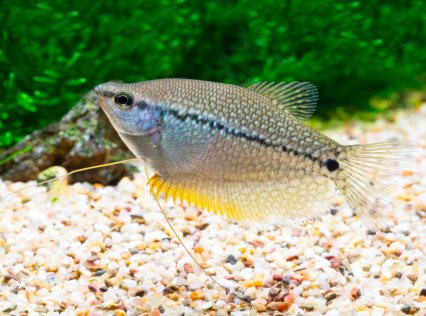 Finishing off the effect are two very underrated fish species. Pearl gourami (Trichogaster leeri) and Honey gourami (T.chuna) patrol across all levels, adding something a little larger for the eye to follow.

The whole collection shouts 'mid-'90s' fish selection, but the execution and the sheer quality of livestock are proof that whatever Gary is doing, he’s doing it right.

This is a tank that all of us at PFK have fallen in love with. It’s where 'old school' meets new — in triumphant celebration.

How much would it cost?

With a mixture of some parts, such as the tank being bought new, some bits picked up as freebies, including some plants, and other bits just making their way over from his earlier set-ups, it’s hard for Gary to tot up an exact cost for this project.

However, as a guide, everything seen on these five pages — fish, plants, hardware and supplements — has been estimated at a combined value of around £1,200.