Nathan Hill visits a reader whose tank truly matches his ambitions – illustrating that a gigantic, briny dream could be more of a possibility than we might reasonably expect.

Every so often a project gets us really excited, so when PFK got a phone call hinting at a whopper of a home tank, we had to see it...

Despite reservations at some of the sizes touted to us, once we’d cast eyes on the system we knew it was a stayer!

Most impulse buys these days are for nano tanks or well-priced starter kits, but for Dave Glover, in Coalville, Leicestershire, the tank that caught his eye was a colossus. 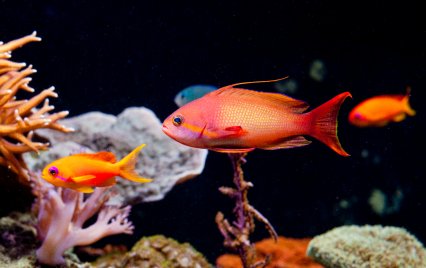 At 2.2m long/7’, more than 1m/3.3’ wide and almost 80cm/2.6’ tall, the purchase represented a once in a lifetime opportunity. Dave even had to draft in another four people to move the thing around, but, being acrylic, it was easier to manhandle than the same size in glass.

The first snag was getting it into the house and most doors won’t accommodate anything this size — Dave’s included.

Even if the frames had been taken off the task would still have been near impossible. Windows were pulled out, the tank ‘posted’ into the living room and windows refitted.

Not many of us are prepared to go that far for an aquarium and certainly not in the coldness of January. Dave did!

Building the supports was easier, Dave using contacts in the building industry to find and assemble reclaimed brick plinths, on top of which an old railway sleeper was placed. This blends well with the feel of the house.

Things have to be sturdy here and with a volume of nearly 2,000 l/440 gal the water in the tank alone weighs the best part of two tonnes. Bearing in mind that an empty Transit van weighs around 1,800 kilos, it’s understandable why Dave didn’t opt for a more traditional, wooden cabinet. 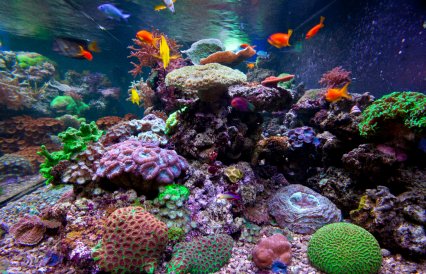 He wanted a coral-heavy reef tank and knew lighting was important. Opting for LEDs by Reef Beam UK, Dave went for six 120w units evenly distanced across the top. To keep them in place he designed and commissioned the welding of metal frames suspended from the ceiling.

The lights are timed, coming on at 1.30pm and off at 10pm. Some parts of the tank look brighter than others, where rockwork brings some corals high up in to the water column, but, on the whole, the spread is soft and wide.

The tank came without lid or cover, so Dave created these too. Given the setting and proximity of the light frame, he wanted to risk neither splashing nor salt creep. Glass in runners sits tidily across the tank, ensuring water stays where it should. 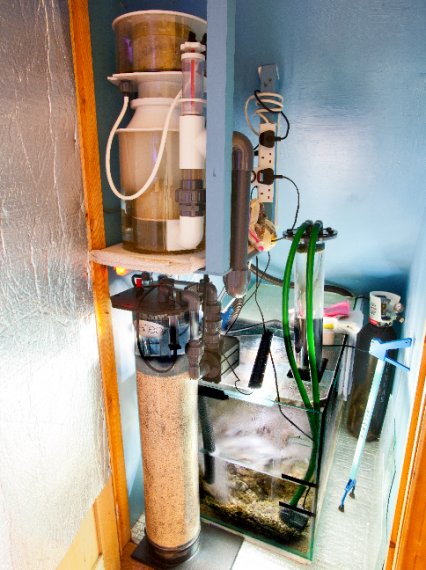 Filtration sits in a separate room. Dave has drilled the acrylic and adjoining walls, creating a grotto of canisters, reactors and sumps that sit beneath the stairs, out of sight but easy to access.

Water is drawn out through a weir system at the back before being passed into the sump.

Here, an aquarium brims with live rock and a Flame angel.

From the sump, water is passed through a Deltec TC 3070 skimmer with a drain and flush mechanism, and this hauls out any muck loose in the water. Rated for 4,000 l/880 gal of water, it’s understressed and working comfortably.

Some water is passed through a phosphate reactor, which has been a more recent addition.

Resourceful wherever possible, Dave uses a model constructed by a contact at Dream Reef, and filled with Rowaphos — the device keeping levels in check.

On top of these a Deltec calcium reactor is also in place, but since using it Dave has noticed an imbalance with calcium levels way ahead of the corresponding alkalinity and magnesium levels. This device is therefore currently in limbo, attached but not running.

Water changes take place every third week, with around 5-10% being drained off and refreshed. Dave has installed drainage directly to the tank, so, rather than physically lugging pails of water, he only has to flick a valve and the tank empties itself.

Refills are costly, with about half a bucket of salt used per change. A mixing tank is hidden to the side, connected to an RO unit to fill it. Salt is added and a 3,500 lph pump mixes in advance. Then it’s just a case of turning a couple of ball valves and the mixer refills its 'mother tank' next door.

Add-on tanks don’t end there and a glance under the aquarium, between the brickwork legs, reveals two small refugiums. Each is filled with Miracle Mud and both are heaving with macro algae strains, with Chaetomorpha featuring primarily. As with the main tank, these are also powered by LED units, although each has only a 60w commitment. 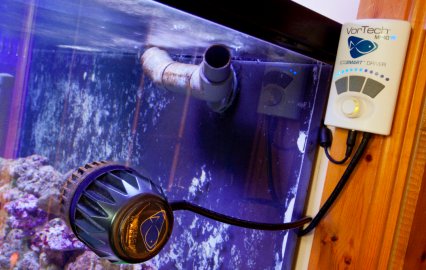 Flow is looked after by returning water from the filters, as well as three Ecotech pumps, surging and controlled by Ecosmart drivers. These can be flicked across settings from rapid pulses, to long bursts to plain and continuous flow. Dave tweaks frequently, allowing for flow to diversify regularly.

Dave is still tackling a few problems. Initially he had issues with Caulerpa smothering corals. He introduced a Foxface, which had a slow start — being keener to take the offered, prepared foods — but eventually he worked out what he was there to do.

Another issue has been with tiny Asterina starfish, but adding Harlequin shrimps has so far done little to control this population.

However, the starfish tend to get snagged on the underside of his algae wipers, resulting in scratches across the soft acrylic.

Most obvious problem is the presence of Acoel flatworms, or Red planaria. These threaten to smother the corals and particularly the mushrooms at the base of the tank. A couple of added wrasse have made little impact and the worms are still going strong.

What’s Dave got in his tank?

Some livestock is easier to spot in our photographs than on site, and other fish just outright shunned our cameras.

Obvious is the shoal of Anthias squamipinnis, with the handsome violet male parading his harem. Other out-and-about fish are the Magnificent foxface (Siganus magnificus), a large but lean Pacific sailfin tang (Zebrasoma veliferum) and two classic Yellow tangs (Zebrasoma flavescens).

Appearing in both aquarium and filter sump are bold Coral beauties, and they’re just two of a few deeper-coloured fish present along with two Purple firefish.

On the smaller side, there are two Fiji blue damsels (Chrysyptera taupou) and two Common clownfish (Amphiprion ocellaris). They flit about alongside a handful of Green chromis which make the most of this unusually large set-up. 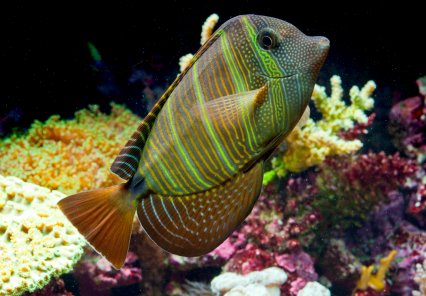 In an attempt to control that flatworm outbreak, a Pyjama wrasse, (Pseudocheilinus hexataenia) wanders about. There’s also a small, female Leopard wrasse (Macropharyngodon meleagrus) visible, browsing through the rockwork for stray amphipods.

There’s also a secretive Marine betta (Calloplesiops altivelis). When our cameras were out he didn’t present himself once, but a face did emerge when everything had been packed away!

His presence might be a good reason why we also failed to spot any shrimps, as hidden somewhere are three true Peppermints (Lysmata wurdemanni), three Boxing shrimp (Stenopus hispidus) and a pair of the starfish-gobbling Harlequins (Hymenocera picta).

Twelve boxes of live rock from varying regions make up the base for the corals and there’s much diversity.

Prominent is a Seriatopora which didn’t take long to open for us.

Other hard corals include Acropora sp., all grown from frags, as are the various Montipora sp. Sat high in the tank and catching more than their share of light are several hammerhead Euphilia sp. 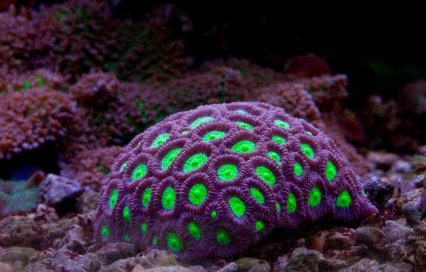 Adding a dash of colour are some trumpet corals (Caulastrea sp.) and bright brain corals (Favites sp., and Trachyphillia sp.) adorn the base alongside a handful of small plate corals (Fungia sp.). Many have been sealed in place with adhesive milliput.

On the soft side, mushroom corals of the Actinodiscus and Ricordea varieties are strong in evidence although struggling with the Acoel densities in the tank.

Faring better are large collections of zoanthid anemones, which Dave hopes will eventually form an encrusting carpet over the base of the tank. 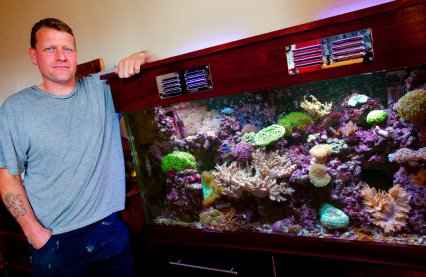 Dave doesn’t think he’ll be adding any more fish, although he expects the corals to eventually bed in and become dominant. He’s also hoping that once the flatworms are under control he might get a spurt in coral growth.

Aquarium timeline: How it all came together 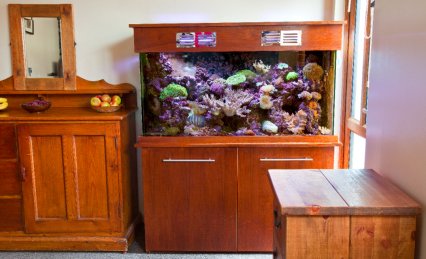 1. The old tank sits in a separate room, established, pretty, but nowhere near big enough for Dave’s aspirations. It’s time to upgrade in style and, when the acrylic appears on the scene, all systems are go! 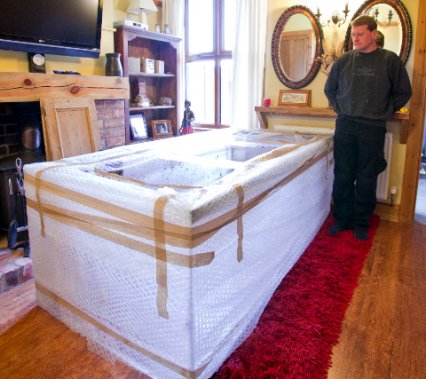 2.  Too big for most doorways, the gigantic tank finds its way in via windows. Even sat empty on the floor it dominates the house! Here, Dave provides a sense of scale for his colossal aquarium adventure. 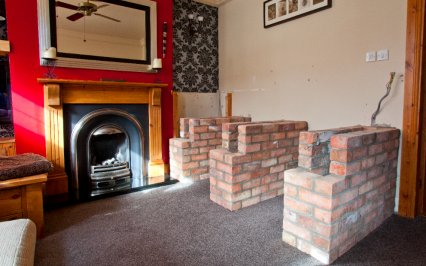 3. Too heavy for a cabinet, a purpose-built brick construction has to be made to support the immensity of the tank. Even empty, the acrylic alone weighs more than many of our home set-ups — and that’s before water’s added! 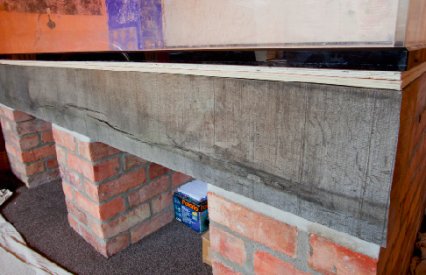 4. To make things visually appealing, a huge railway sleeper completes the base and makes an unusual trim on the tank. Dave had the sleepers from an earlier project, so they just needed to be cut to length. 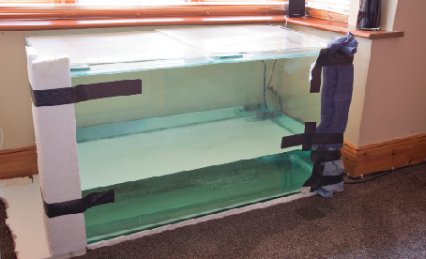 5. Dave brings in yet more tanks, one to act as a mixing vat for waterchanges and others to take the role of his live rock sump, as well as his two Miracle Mud refugiums. Now begins the task of drilling walls and plumbing pipes. 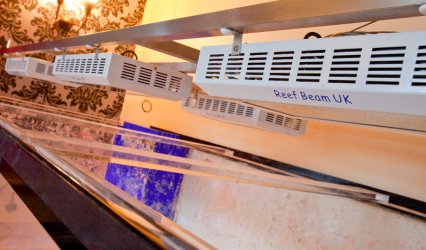 6. Lights are added to the tank, sat on Dave’s custom-made metal frame. Evenly spaced, the six 120w units are shielded from splash by home made cover glasses. Underneath the tank another two LED units bring light to refugiums. 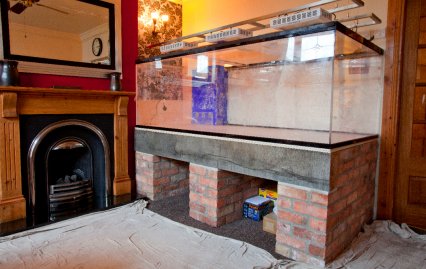 7. The tank sat dry, Dave can start to plan his interior layout. He already has the contents of his other tank to move across, but, before that, he needs to get everything filled, flushed, emptied, refilled and brought up to salinity. 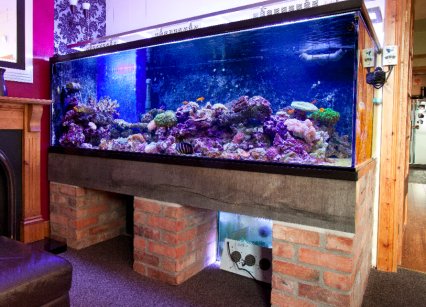 8. Having filled up and with his pumps rigged, Dave moves everything across from his existing set-up and starts to increase his live rock. Even with a few extra boxes the tank looks sparse and now he starts the expensive task of stocking up.

You can see a video of Dave's tank below: