Nathan Hill meets a reader who stays calm and relaxed, despite spending his life surrounded by some of the hobby's most bellicose species of fish.

Most fishkeepers have a penchant for a particular niche. Often, the top contenders for an aquarist’s affection are grouchy cichlids or cats sporting Dali-esque whiskers.

Touring his home, it soon becomes obvious that from one room to the next the endless strings of aquaria that hug the walls are mostly filled with fish from a single genus — the Betta.

Dave is fighter-obsessed, though other fish still make an appearance. Among his numerous racks are Betta 'barracks' where several fish are housed side by side in close proximity, sharing a filtration and water supply.

In contrast to the pugnacious nature of the fish he admires so, Dave’s front room is homage to relaxation. Wherever you sit you cannot find a spot where you are not looking into one tank or another, whether you’re reclining with inquisitive male fighters peering into your ear, or face on to Dave’s centerpiece — a gourami-heavy Juwel Rio.

Combined with the numerous Buddha figures and images scattered around, you soon slink into a feeling of Eastern harmony and understand just why Dave is as laid-back as he is. It is very calming here. Little wonder, then, that Dave is also the unflappable man at the helm of the Corby and District Aquarist Society. 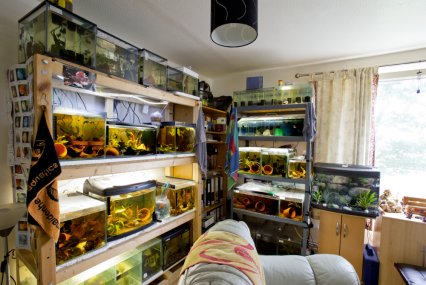 Dave started into the hobby young, though his earlier keeping years were intermittent. When he was just 13 he had been inspired by his uncle to bring one of his own fish along to a show — in this case his prize Three spot gourami, Trichopodus trichopterus, and he unexpectedly took first place with it. An affinity with anabantoids was created there and then.

Later, a military career with periods spent away ate into Dave’s time, making fish less of a priority, though he did try to keep his hand in with a small tank here and there where he could.

Leaving the army paved the way for getting back into things, and now, many years later, Dave boasts no less than 49 aquaria scattered around his property. Even the kitchen isn’t excluded from a little piscine makeover, with tanks pushed into every available space.

The aim of the game here isn’t just keeping fish as trophies, but instead to get hands on with breeding projects and Dave has many on the go. Where his front room houses fish that are undergoing conditioning, those that are destined for some intimacy time are moved into the bedroom. Where else, after all? 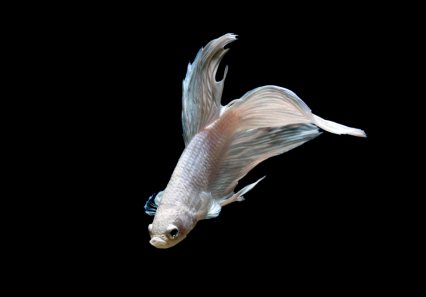 A pleasant surprise is the volume of tanks dedicated to obscure and lesser-seen Betta.

The first fish that grab you are the astonishingly high quality B. splendens in a myriad of forms and colours. There are many of them to take your fancy, but it’s when you look lower down into the other tanks that you see less familiar faces and subtler markings.

Dave has a big thing for wild-caught Betta species, brought in through a handful of trusted names through the UK, and I’ll happily concede that this is the first time I’ve ever seen some of these species in the flesh.

Look even closer and you’ll see a few more surprising individuals tossed into the mix: a crafty Channa here, a pair of spawning Discus there. One constant seems to run throughout everything Dave keeps: if it hasn’t spawned yet, it’s going through the motions and sure will be soon.

Dave is most definitely of the old school of aquarists — keep it, breed it, never give up and share the bounty. There’s something that we can all take away from a fishkeeper like him and that’s the sheer doggedness of never giving up. What might be harder to fathom is the sheer passion that it takes to devote so much time and energy to this many set ups.

What makes it all the more exceptional is the ever-cheery disposition that Dave carries to all the chores at hand. Say ‘hello’ if you get the chance to talk to him, and I promise you’ll never meet a calmer, more relaxed aquarist in your life. Never. 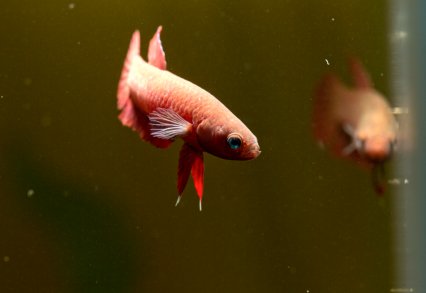 There are plenty of different species of Betta for the enthusiast to drool over here, including but not limited to: 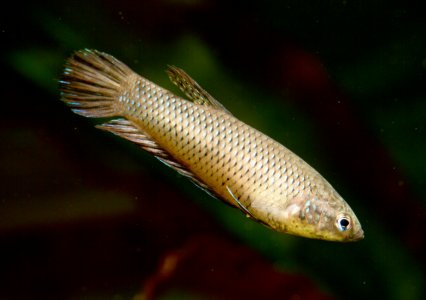 Dave has advice for those wanting to get into Betta breeding. First of all, he recommends that you have the full history of whatever fish you’re looking to buy — what it’s been kept with and especially the water parameters it’s used to.

Secondly — and something that Dave is becoming ever familiar with — he recommends taking things slowly and not going too mad to begin with. Dave’s influence is leaving a trail of Betta enthusiasts in his wake such as his cousin, who in a short time has already acquired four Betta barrack systems, three tanks for females, as well as a display five-footer tank and another table-based piece.

Dave suggests that before taking too much of a plunge, time should be spent becoming familiar with water chemistry and quality. Understand the fundamentals of keeping water and the fish will look after themselves!

Lastly, he recommends the UK Betta Breeders Association to anyone considering taking Betta breeding to the next level. 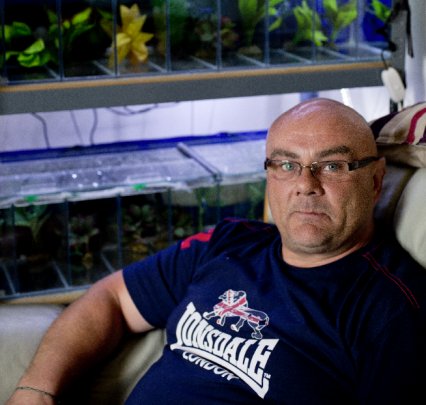 A whole lot of tanks without breaking the bank

What makes a set up like Dave’s so appealing is that he has managed to put it together without having to break out credit cards or call up bank managers. Everything here has been acquired and constructed in the most frugal of ways.

The racks of aquaria are the fruits of clever shopping. Wooden frames, complete with several tanks, were picked up from former breeders for very low prices — as little as £30 at a time. Dave tells me many hardware bargains have been grabbed from eBay.

Filtration is performed with a number of air-powered internal foam filters, gently simmering away in every aquarium. These in turn are powered by an old pond air blower hooked up to a network of airlines, supplanting the requirement for dozens upon dozens of individually powered canisters. Dave is not a huge fan of recirculating sump systems, perturbed as he is at the potential for infection to leap from one fish to another.

He’s a stickler for quarantining new acquisitions as well as scrupulously recording each new arrival, water parameter and breeding history of everything he owns. Dave even goes as far as to photograph a new fish as soon as it goes into a tank, taking further pictures and comparing them over time, and staying vigilant for even the first hint of something — anything — changing. 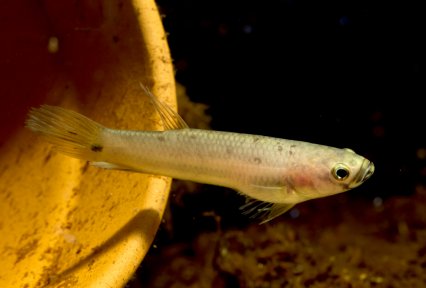 Dave leans heavily on the New Era range of foods for much of his fishes’ daily sustenance. With many of his Betta, Atkinson’s pro is used, and combined with a little JBL colour-enhancing flake it helps to retain the bright veneers of his livestock.

The fry and those fish being conditioned to breed get extra treats. A bubbling cone of Artemia nauplii is on constant standby especially for any young appearances, as are cultures of grindalworms and microworms.

Maintenance is increased slightly by the fact that the tanks are run individually, but Dave somehow finds the time. 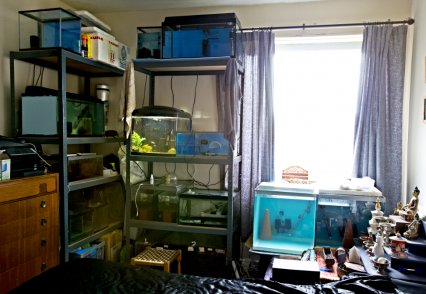 Currently, he guesses it takes around three hours per session to get everything in his collection water changed, though some tanks require more frequent attention than others. Dave usually changes around 15% of the water at a time, and depending on which fish he’s working with he may use RO water mixed with a little tapwater to remineralise and stabilise it. Wild fish will get an RO supply every time.

Dave also adds a little blackwater extract to his tanks in one of a couple of ways. Many aquaria have Almond leaves in them, and he buys full-sized, bulk bags of the leaves rather than tinkering with expensive, cut down versions.

His other blackwater source comes from a homemade Alder 'soup' where he fills an old, cleaned cola bottle with a handful of Alder cones, fills with RO and leaves it to stew. It doesn’t take much of the rich, red/brown liquor to sway pH down when it is added. Some tanks are in the dark; others are illuminated by either T5 tubes or budget LED strips mounted into the topmost parts of each rack. 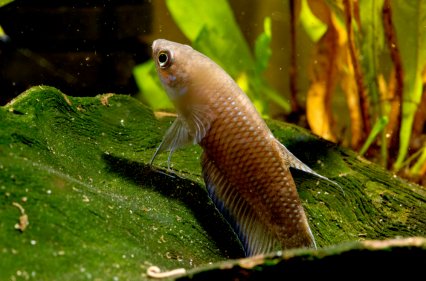 The tanks are heated individually, which contributes to the greatest part of the fuel bills. Dave swats the suggestion of going for a controlled temperature room — not being a fan of either the sickly heat or relentless humidity that accompanies it.

Dave guestimates he’s spent £2,000 on all the hardware he owns — giving him a lot of tanks for less than the price of one medium Amano-style aquascape!

One of Dave’s ambitions is to create his own colour-and-fin-shape strain of Betta.

Without giving too much away, he directs me to bright copper and MG (formerly known as Mustard Gas) varieties, into which he has aspirations to add a little wild genetic material.

For Dave, breeding his fish is integral to showing them, and he hints at a little contention towards aquarists who buy fish to then show them. Far better, he feels, for keepers to take pride in a fish that they have bred for themselves and raised to adulthood.

Currently, Dave shows his fish around four to five times a year, though he’d like to do more. Only last year, one of his Betta took first place at a Brighton-based show, as well as another landing third.

Dave also used to have a thing for breeding quality guppies, and in the same contest one of his fish romped home with a first in that category too. 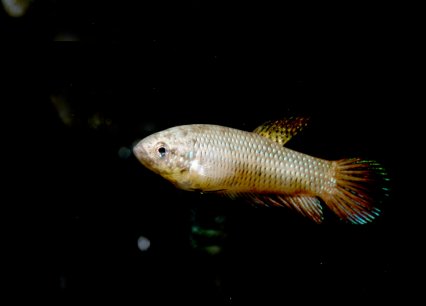 Breeding antics that change the rules

Prior to spawning any fish, Dave will condition them where they are and only move them to the bedroom to breed once all fish are thoroughly chomping at the bit.

Conditioning often involves screening off the Betta in their barracks so that they cannot see any potential rivals as well as feeding them on a mixture of fresh, frozen and dry foods — especially live grindalworms.

Dave has spawning activity take place at least monthly. When ready, male and female Betta are transported to a bedroom tank, planted at one end with a loose bunch or some Java moss. These breeding tanks are unfiltered and will feature almond leaf at the base, as well as some of Dave’s alder cone liquor.

At first the female is confined to a funnel so that the male can smell her presence and, so inspired, start working on a nest. Once made, Dave releases the female to watch what happens. In most cases, the male and female will embrace beneath the constructed bubblenest, though if the male turns nasty Dave will put her back in the funnel for a while longer and try again at intervals.

He’s had a few anomalies when breeding his Betta. He has found that females have actually beaten the males up, in stark contrast to their usual behaviour.

In another rule changer he had one female that would share the burden of caring for the eggs, helping to lift them as they fell out of the nest and spitting them back into the sticky bubbles.

Dave says that of the varieties he has spawned, Crowntails are among his most reluctant to spawn, whereas the classic Plakat Betta are more fighters than lovers — preferring to beat up their females than breed with them.

Dave gives the fish he breeds away to other Betta keepers, but only after he’s taken the best of the bloodlines for himself to bring him one step closer to constructing his own fighter variant.

Check out some of the other tanks in the Your Tanks section.