Me and my tank: Abdul Mufti Strong plant growth and colourful discus combine to make this set-up a real feast for the eyes. 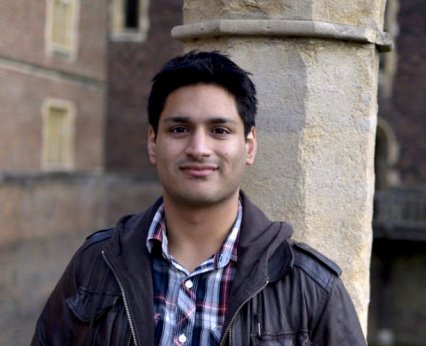 My mother-in-law kept goldfish and tropicals for many years, so when I got married, to make our new home feel a bit more familiar for her, I purchased a 100 l/22 gal tank.

I’d assumed my wife and mother-in-law had good experience with fishkeeping and thought it would be fairly straightforward: boy was I wrong! I had little to no knowledge of fishkeeping let alone the nitrogen cycle. Our first foray into the hobby ended in disaster to say the least with several deceased fish as a result of poor advice and lack of research. 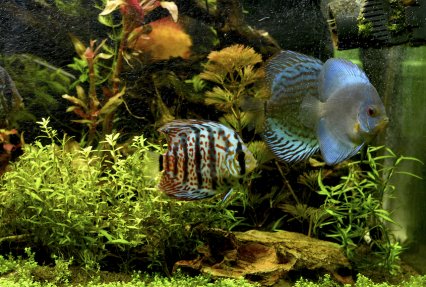 I have a 250 l/55 gal planted discus tank — a challenge and a nightmare simply for the fact that it houses some of the most "delicate" fish I’ve ever had and also the first time I’ve kept discus. It’s also been a bit nerve wracking because of the CO2 and fertiliser levels I need to keep for the plants.

The other tank is a 150/33 gal planted set-up — a mishmash of random fish that have been left over from previous community attempts. These are the ones that survived ammonia and nitrite spikes at the start of the tank’s life and ones I don’t want to part with just yet!

It’s a tie up between discus and German blue Rams; absolutely stunning colours and behaviour. I find the varying colourations of discus very intriguing.

Discus. They need specific water parameters, so it’s always a challenge keeping on top of nitrates as well as good and frequent gravel vacs.

Guppies. They’re one of those fish that just keep giving… literally! We started a tank off with two females and one male. We ended up with 10 males and 25 females and had to sell off quite a few!

This is a difficult one to say! For a long while it’s been Hemianthus callitrichoides because of its 'pearling', the lime-green colour and the dense carpet it forms, and Pogostemon stellata because of its colouration and the way it forms its leaves. Definitely one I’ll be using more of in future 'scapes. 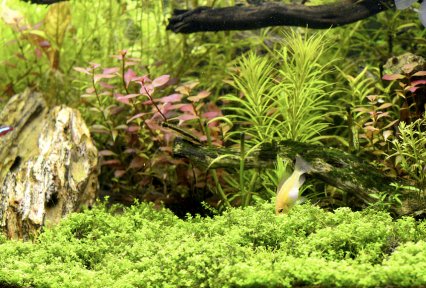 Which fish would you most like to keep next?

We like a lively looking tank, so without overcrowding on guppies we want to try interesting and 'out-there' fish that aren’t very common.

Phoenix moss, Fissidens fontanus. I absolutely love the effect this gives on driftwood when it’s used as a canopy. I’ve yet to get my hands on any for our upcoming attempt at true aquascaping.

It really feels like I’ve already got it with my discus tank but I would really love to get a larger tank and scape that for them. Alternatively, a large marine tank is definitely something the wife and I have been pining for. Potentially something we may do when we move house!

Do your research and don’t always trust advice from your LFS (unless they stop you from buying something!) Some of them will just tell you what you want to hear. Make sure you join a good and supportive forum, (like PFK).

Save time:
Save time and back-ache during water changes on larger tanks by investing in a return pump, a large plastic container (at least 50% your tank’s volume or close to what you’re going to change), a tap garden hose connector, an inline shut-off valve and a long extension!  (All of this cost me around £50 to put together). I’m no longer lifting buckets or bottles to do my water changes and rather than the hour it used to take me, it now takes a mere 15 minutes.

Save money:
Read as many reviews on products as you can — make sure you try to get the assistants to demonstrate them, if they want your custom they’ll oblige. Use EI dosing for fertilisers — it’s far cheaper than premixed stuff and it will last a lot longer too!

How addictive and expensive it can be! I’ve certainly spent more than I’d like to admit in both time and money on these tanks in the past two years. That’s not to say I haven’t enjoyed them a lot though!

Also that you’re better off investing in quality first, rather than trying to go for the cheapest option; Buy quality, buy once. Buy cheap, buy twice.