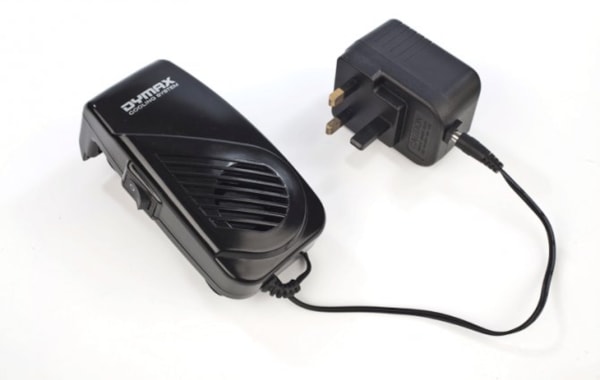 I wasn’t going to give this fan a conventional test. I wanted to push it out there to see how it coped with abuse...

The unit is attached by a built-in clamp to the side of any conventional open topped aquarium — or rather those that have issues with excess heat. The surprisingly gutsy fan then blows across the top of the aquarium, taking away excess heat as it does so.

The product claims to be able to remove between 2-4°C from room temperature, but I wanted to see how it would fare against something hotter.

Planting them on my desk I rigged the fan up to one cup, the other was sat close by without any air movement. Both cups were reading exactly 83°C/181°F when the thermometers went in and I turned the fan on to see what happened next.

After some 20 seconds of nothing there was a sudden jump between the two — nothing huge, but an extra 0.3°C from the fan-cooled cuppa.

When the fanned cup eventually reached a fishily respectable 25°C/77°F, it’s fiery rival was still simmering at 42.8°C/109°F. It did what it said on the tin, albeit in slightly different circumstances.

It’s not the quietest of accessories, but I’ve had to deal with far noisier internal canister filters.

Blowing across the top of a hot tank tends to play havoc with evaporation, but in our increasingly hot summers it may make the difference between saving and losing those expensive corals. At just more than £20 it’s a lot cheaper than a chiller unit.

I’d buy one. I’ve had enough high summer situations running around with large household fans trying to cool down overheating tanks. One or two of these would have been a great help.

The fans come in two sizes: a W-5 and larger W-8. There doesn’t seem to be any suggestion as to what size of tanks these fans will cool, but I’d say the W-5 would struggle at more than 60cm/24” and the W-8 be hard pushed to cool anything over a 120cm/48.” Even then it might take a while.

Although designed to hang on to the side of the aquarium, they are powered by a cable that plugs in to a supplied transformer, making them a low-voltage accessory. That makes them pretty safe and low power into the bargain.

I tried pouring water into mine to try to kill it off. I shook it and it was fine. Even now I keep hitting it against my desk and the thing refuses to give up. It’s a sturdy little brute.