Nathan Hill tests the new Gyre pump to see if it lives up to the hype.

The Gyre has proved divisive among marine hobbyists. The key contention is price. And, to be honest, that seems to be the only real contention, as I’ve yet to hear a bad word against the unit that wasn’t just a case of sour grapes.  Some folks seem to imagine that the Gyre is just the equivalent of a big spraybar with a pump blasting through it. Very wrong, chaps...

The Gyre is the sort of pump that you’d find if Batman had an aquarium: it’s the Batpump. It’s black, smart, and an entirely new take on an existing theme. It has a wealth of settings that you’d need to use multiple other pumps to try to replicate. And it’s simple to use.

Traditionally, flow pumps for marine tanks look like bulbous CCTV cameras, pointing here, there and everywhere. But the Gyre is a long slip of a thing that tucks up at one end of the tank. Forget about having to point it in any particular way on a ball joint — it doesn’t work that way.

Maxspect makes the claim that the Gyre puts an end to any dead spots in aquaria, and aside from cheating by putting a hermetically sealed box into my tank, I’d have to agree. Even a rocky tank will behave like a snow globe when the Gyre first goes in and lifts the debris that other pumps couldn’t reach.

Instead of using a spinning, centre-pointed impeller, the motor of the Gyre sits between two long, centrifugal fans that look like an underwater combine harvester. These arms, jutting out either side, can work either forwards or backwards, and either continuously or pulsing, for laminar or turbulent flow. And by God are they powerful.

The mount holding all of this in place is magnetic, which is really the only safe way to have this running: you don’t want it dropping off of the side while it’s active. Maxspect claims the magnet is good up to 15mm, and offers a separately sold ‘reinforcement’ magnet for thicker glass.

The standard mount is a rigid plastic affair that holds the Gyre within a centimetre or so of the glass, but there’s an alternative, rubber mount that both holds the Gyre further away, and reduces the already low running noise by about 50%. Liken the sound with the standard mount at its loudest (at full power in pulse mode) to a housefly buzzing around the room — it can be distracting, but only if you start to really focus on it. 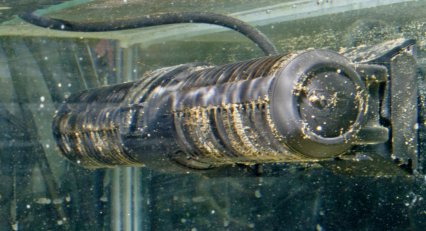 There’s a degree of control over the direction of the outflow, which is attained by twisting the fan shields, though in most cases I’ve encountered, Gyre users seem to have their outflow boosting directly across the tank at a 90° perpendicular angle. Still, the option’s there.

However, combined with the myriad of flow settings, as well as the ability to mount the Gyre vertically instead of horizontally, and with the option to physically invert the directionality of either fan, the flow options just get out of this world. You can have an ‘A-B’ setting, where both blades face the same way, or an ‘A-A’ setting, where the two fans work in opposition. To set this up, you simply remove one of the arms and replace it with its opposite — all supplied in the kit. It takes seconds to do, and requires no tools or fiddling.

Hell, you can even have laminar and turbulent flow going on at the same time from different directions, if you want. This thing is versatile.

The flow rate varies according to setting, starting at around 5,500 lph at the lowest setting (1) and going as high as about 18,900 lph at setting 10: at full whack it’ll consume its total quota of 50W. Having witnessed one running in a retailer’s coral set up of 200cm long, it was surprising to see just how much movement it can create at the opposite end of the tank at full steam — coral tentacles were decidedly swinging under the barrage.

Get it on to pulsing mode and tweak the settings, and the waves you can generate are impressive — think 10cm/4in or so, and you’ll be on target. I’d advise caution when initially playing, as in high-level tanks you might find yourself inadvertently sloshing over the edges.

As you might expect, you get lots of control over pulse rates, with 20 settings to choose from ranged from 0.4 second pulses, up to 30 seconds.

The controller is refreshingly easy to use, and involves just three buttons and a dial. The buttons consist of power, mode, and setting, and after playing for a couple of minutes you soon have it worked out. An indicator light sits in the middle of the dial, letting you know what it’s up to at all times. Blue is running, flashing blue indicates feeding mode, reds indicate a problem, while green lets you know you’re in set up mode. I can’t convey quite how intuitive it all is. You press mode, go to settings, and you move the dial up or down until it does what you want in real time. There’s none of that annoying ‘setting everything while nothing happens stage’ only to then try to activate it and still have nothing happen.

The controller isn’t waterproof, so while I want to have it up on the side of the tank, sat in its cradle, I’m not confident that I’ll never cause a splash.

Maintenance is easy. Maxspect suggests cleaning every three months, though I’d prefer a monthly spruce up. Just take everything apart, dip it in vinegar after a scrub, rinse it down, and the job is done. Just remember exactly how everything was aligned when you take it out, and make sure you put it back together the same way, as you could end up totally redistributing flow in the tank and upsetting everything.

Is it too expensive? I’m looking about and they’re retailing for around £250. Putting that into comparison, if I was using other brands I’d need at least two (maybe three) pumps to get a not-quite equivalent. Then I’d also need a controller. In that respect, the Gyre works out pretty cheap, but I’m well aware that some keepers won’t agree. Well, tough, I think it’s fair value, and I’m not even using it with precious corals...

There’s a smaller 35W model (the Gyre XF130), and an even bigger 70W version (Gyre XF170), which will be handy if you ever need a spare speedboat engine.

Absolutely outstanding. The controls are a doddle, and the flow is like a tank-contained tsunami. The only problem you’ll encounter is accidentally setting it too high and blasting your beloved polyps clean off their rock faces, so go gently when rigging it up. To everyone who thinks you can do something similar with a spraybar and a big powerhead, you couldn’t be more wrong — this item is unique, and it’s taking reefing to the next level. I think it has an important place in the freshwater market too, providing flow for riverine fish.