I played with a lot of expensive and fancy LEDs last year and now I'm keen to see what a cheaper model can offer me, writes Nathan Hill.

This, from All Pond Solutions, seems a promising lump out of the box. It’s big, bold and weighty and I’m wide-eyed with surprise at its build quality. It’s robust, for sure, and smart too.

There were a few shaky moments early on when attaching the power cables, given the way that the locking nut was so reluctant to connect to the thread, but some fighting and jiggling about soon sorted that. 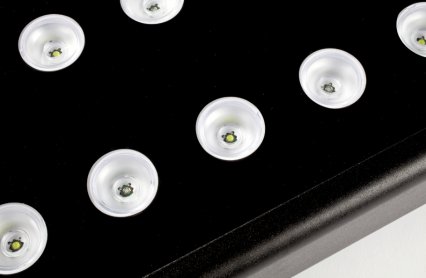 That light spreads over a 90° angle, no less. Conferring with the manufacturers, there are 30° and 60° lens options available, though whether these will be imported into the UK is uncertain. Tight beams like those would be superb for SPS and other light-indulgent corals, but not so much the generic reef. The 90° seems a good choice.

Each channel is controllable, but not on a 100% output scale. Clicking the units on, they start at somewhere around the 50% mark and can be cranked up to your personal taste.

Built in to the top there’s a big fan, which looks like a sod to reach if needing replacement, and opening the unit invalidates the warranty — as stated on the stickers plastered in the front. It’s a shame as they detract from what are pleasing, if chunky aesthetics.

The fan is quiet as fans go, even after a period of running when some designs seem to get whiney. The fan doesn’t come on at a set temperature, but runs continuously when the light is in use.

Overall power consumption at full whack is 60w, making it about half the power of a Radion XR30w for around half of the price. Admittedly it doesn’t have the controllability of a Radion, but certainly more than any of the fixed-state LEDs.

Control is a doddle, requiring no pre-setting or programming. That may not appeal to the reefer who likes altering light levels over the course of the day, but it’s no issue for me. However, if you want programmable controllability, then that’s where competitors start to cost more. It’s your choice.

I notice that the warranty is for three years though, as opposed to other manufacturers who claim that their lights should be shining well for six or seven years.

Mounting kit is a cable affair and provided as standard. Though the manufacturer advertises a mounting bracket, I’ve not seen them offered here, potentially due to issues with legality of mounting under UK legislation. It makes little odds, as the unit is tidy enough when suspended.

I’d make sure that fastening is particularly resolute though, as at 4.5kg/10lb this is a heavy brute to have swinging from the rafters.

Want the top-end reef look without top-end reef price? Then this is the way forward. It’s a looker and it delivers. I’d have one.