Having already put an Arcadia T5/LED hybrid and an ATI Powermodule through its paces, we've now taken the opportunity to give ATI's new hybrid the same level of scrutiny, writes Levi Major.

Many reefers appreciate the quality of light units produced by ATI and this unit is of the same slimline and robust quality as its established T5 lighting units. Housed in an aluminium and stainless steel fixture to provide an elegant and rustproof luminaire, the LED modules are located centrally and flanked by two T5 bulbs either side.

I had not expected this unit to put out as much light as the OT2 hybrid, given the latter has six T5 bulbs, but at 100% power on all channels it’s difficult to say which lights are brighter — and this stands testament to the quality of the reflectors incorporated in the ATI Powermodule.

The individual parabolic-style reflectors, understood to be made from silver-coated reflective aluminium, really help to punch down the light from each of the T5 bulbs. The combination of the blanket light covering of T5 lights is enhanced with the addition of LED light modules and certainly gives you the best of both forms of aquarium lighting.

Being able to control both banks of T5s independently from 0-100% and each of the 75w LED clusters, which feature four independently programmable LED colour channels each capable of 0-100% dimming, means the user is in charge of not  only the colour of lighting but also the intensity of lighting.

The intuitive computer control software makes adjusting the aquarium lighting reasonably quick and easy, once you get the hang of the operation.

Having this amount of control over all available channels allows you to not only automate a sunrise to sunset pattern but it’s possible to use the light as a moonlight to mimic the lunar cycle.

The clever souls at ATI have also added red LEDs to the clusters, so not only can you help bring out the colour of your fish and corals, but programme the light to help you with stock introduction or watching late night live rock activity.

What’s also great about the hybrid of T5 and LED lighting is that with the array of T5 tubes available these days you can blend two or more colours of tubes, from white to blue to purple or pink. Being able to control the output of the T5s will also allow you to reduce energy consumption by running them at a level appropriate to the size and depth of the aquarium while allowing the shimmer effect of the LEDs to shine through.

What’s more, not only can you control dawn to dusk simulation and the waxing and waning of the moon you can also introduce simulated cloud cover.

Programming the light is as simple as plugging in the USB lead between computer and controller, and you can set up all these functions within the provided programme. If required you can programme the light from the LED power controller. However, the latter is a more hands-on and cumbersome approach. 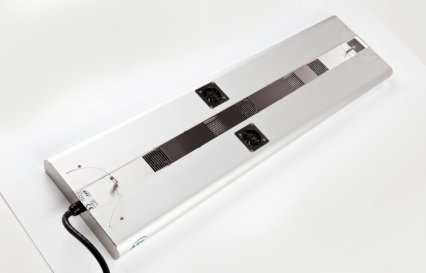 There’s not much to dislike about this unit, but a few things stand out to me as design flaws.

Firstly, the power lead from the LED power supply/controller to the light enters the light fixture on its side, but should ideally be from the top; yet this is personal preference. That said, a single lead is a definite improvement over ATI’s previous two-lead power supplies. 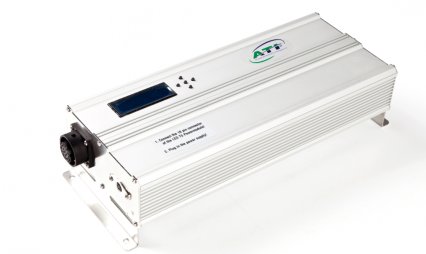 So unless you want to mount the LED power supply/controller externally to the aquarium stand, as on a wall, it will need to be located either vertically on the side wall of the aquarium stand or along the back of the stand.  The latter choice is likely to mean you need to balance your laptop on top of your sump, should you wish to re-programme the light!

While the PC software is reasonably intuitive ATI could have made it easier to programme lunar phases and cloud cover. While possible to programme, I believe the software should allow the user to click a simple tick box to allow for lunar simulation and whether cloud simulation is required, rather than having to manually figure these into your programming.

This is one of the best light units on the market. Not only is the build quality next to none, but it incorporates the best of T5 and LED lighting. Should better LEDs become available the user will be able to swap these out themselves and we already have a plethora of T5 light tubes to choose from.

While the unit is a little pricey, the combination of T5 and LED lights work in perfect harmony, allowing the user to programme not only the colour but intensity of the lighting from the deeper oceans to reef crest.