AquaKnow hardscape kits are tremendous packages for the fledgling aquascaper or even the more devoted layout designer, says Nathan Hill.

I have two sets to play with — one with a definite Seiryu/Manten feel, and the other more of a beige dragon stone.

However, both are very realistic and avoid the open base, that bane of artificial rocks. The former, named Mysterious Scene, is rated for a tank between 30-75cm/12-30” and the latter, called Water Screen, is for 45-75cm/18-30” tanks, though the kits are roughly the same size.

Aside a couple of shaky edges the consistency is good and playing with both sets dry in a 45cm/ 18”long tank, a very acceptable hardscape layout (think iwagumi) can be easily achieved.

My only reservation is how well the colouring will stand up over time, as some ornaments of this nature tend to bleach when under aquarium lights for too long — and that’s not even factoring in the impact of the high-intensity glare of aquascape lighting. 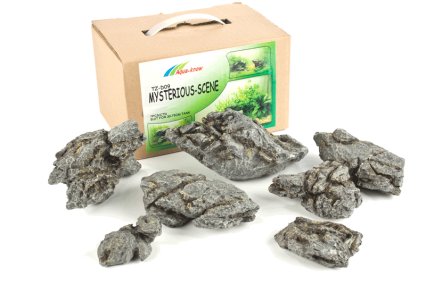 The Mysterious Scene package contains seven different 'stones', the smallest being 8cm/3.1” at its longest point, the largest reaching 17cm/6.7”, with corresponding increase in mass in between.

My only worry is that even though they have holes to allow them to fill and sink, they may eventually turn anaerobic inside. They may therefore benefit from periodic draining and refilling to keep flow through.

These are safer to have rolling around the inside of a tank than the real thing, are smart and realistic, and a lot easier to carry out of the shop.

They get a big thumbs up from me and I look forward to putting some working aquascapes together with these sets real soon.