The products in this new range come with some large claims, says Nathan Hill. So we thought it best to send samples of the food out to a wide range of real world aquarists to get a broader lowdown on how it behaves.

FishScience is the new food range from Dr David Pool, formerly of Tetra fame and now flying solo with his own brand.

After sending 12 pots of 50g Tropical Flake and 55g Tropical Granules to 12 readers, with some pointers about what exactly they were looking for, all I needed to myself do was sit back for a month and let the results flood in...

Kicking off, Brian Wolsoncroft of Surrey notes that: "Both flakes and pellets looked good and smelled fresh." He found that: "The flake was a little flimsy, unlike crisps, but not a bad thing as all my fish are small and had no trouble biting bits off."

Lauren Malley of London concurs, saying: "I liked how the flakes were very light — very good for small fish." However, she adds: "The granules were a little large but only for my fish. I imagine that cichlids would take them well."

Nicola Johnson of Truro, Cornwall, says: "The flake foods look like most other brands, if smaller. They hold their form well in the water for long enough before being eaten."

Meanwhile, Sean Wilson of County Armagh, Northern Ireland, found that: "The texture of flakes is good, not oily like some I have tried, but possibly a little too brittle.”

Sharon Knott of Wirral, Merseyside, said that the flakes were a little too strong on garlic for her liking and suggests: "Maybe reduce the garlic content, as my fish are not fond of garlic." Sharon also noted that: "My fish didn’t go mad for this food like they do with normal food."

However, on the whole the feeding response for the flakes was good, with the majority (ten out of 12) of testers replying positively when asked how well the fish responded to the flake both at the first feed, as well as after the four week trial. 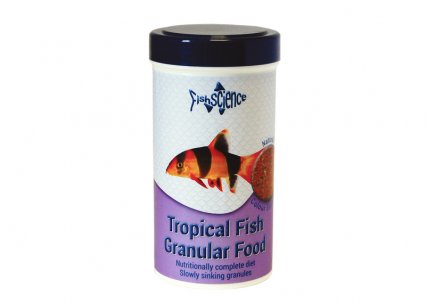 The granules seem more contentious across different mouth sizes. Lauren points out that: "The Penguin tetra didn’t touch it as it sank so fast that it shot right past them. It was a bit bulky for them anyway. The Cherry barbs took it and spat it out, a bad reaction on first feeding. The Corydoras ate it after it had softened on the bottom."

By contrast, Sharon wrote: "Even my Synodontis that never leaves his rock comes out and goes mental for this stuff."

Nicola found: "The granules were popular with all but my Betta. He ate a couple at first while they were still floating but wasn’t that interested." At the end of the trial she found that: "The Tiger barbs, Buenos Aires tetra, goby and Otocinclus have all been spotted digging in the gravel for missed granules after feeding."

Regarding improvement in colour, the results at the end of the trial were mostly positive, with only a few reviewers noticing little to no change.

Brian states: "I think the barbs are now showing deeper red and are constantly looking ready to spawn. The Ram’s blue is more intense as is the blue on the Cardinals."

Lauren also noted a change in her barbs, saying: "The Cherry barbs were much more sexually active, perhaps a bit more red in the males, but I’m not sure."

Sean notes: "Colour has improved in most fish; they are looking a lot brighter. The colour in my Dwarf rainbowfish has come out more than ever. They are truly stunning. The fish that have made the biggest gains have to be my Black ruby barbs. They have really blossomed showing incredible colour and size in such a short period of time."

From the responses received, only one user noted a strong difference in water clouding when compared to using their usual Tetra branding.

Universally, not one tester reported a change in water quality or the need for increased water changes while using these foods.

Overwhelmingly, reviewers agreed that they would buy the flake bar one person, though it was closer to a 50/50 ratio of granule fans, with keepers of smaller fish citing unpalatability as their reasoning. In FishScience’s defence, I did send the product out 'blind' and referring now to the packaging, the granules are intended for larger mid-water and bottom-dwelling fish.

Overall, the outcome is good with colourful, growing fish and no noted waste increases. Good job!