Here's a product format most won't have seen before, says Nathan Hill — a range of water quality and chemistry based products in 1 ml ampules instead of bottles.

These products from French company Prodibio look like those wonderful stink bombs from my childhood days of playground fun, but inside is a good blend of ingredients.

Dosing is blissfully simple. Each ampule relates to a volume of water. Calculate how much water you have, check off how many ampules you need, pop off each end and just pour it in. 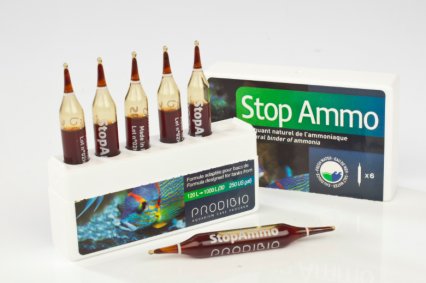 Stop Ammo is a plant extract-based product, using chemicals that plants utilise to bond to ammonia, rendering it quite harmless.

Although some communication with Prodibio’s development researchers was lost in translation, I understand the process takes place via the medium of glycoproteins these plants use to bind ammonia and other nitrogen sources.

These gradually release the active ammonia back into the system over a delayed period.

That’ll certainly give bacteria some breathing space in the event of a filter crash or surge of pollution.

BioVert is pretty self-explanatory as a plant food supplement. It’s made up from a mix of iron, manganese, sulphur and potassium, in the absence of nitrate and phosphate, and although it’s not going to appeal to aquascapers who use EI, or someone on a strict fertiliser regime, it should help the everyday aquarist who has limp greenery.

However, the biggest treats in the range are the biological supplements. Unlike UK companies that refuse to reveal which bacteria they use, Prodibio is quite transparent.

In its BioDigest additive, it advertises a mixture of bacteria from the Nitrosomonas, Nitrobacter, Paracoccus and Pseudomonas groups — so is a good mixture of both authotrophic and heterotrophic nitrifiers and denitrifiers.

If all of these bacteria reactivate in the aquarium we’re in for a treat. They all activate at different rates and do different jobs, and in an ideal world would even help to reduce nitrates and phosphates.

Do they have any effect on my tanks? It’s hard to say, as nitrates and general water quality issues don’t tend to bug me. The jury’s out on this one.

Like similarly marketed products, these bacterial supplements require periodic replenishing, with fortnightly doses recommended. With no need to refrigerate, and having a long shelf life, that shouldn’t pose a problem.

I’m taken by BioTrace, which is literally just that — trace elements for anything in the aquarium. That may be bacteria, fish or plants. Either way there are vitamins and other goodies for all organisms.

It’s also claimed that bacterial colonies may flourish at a higher rate and that this may help water quality. My fish look a little sprightlier since I’ve started using it, but I can’t comment on filter activity.

Included in BioTrace is an interesting addition of plant surfactants, which, on investigation, may indeed enhance the rate at which bacteria can grow. There’s much speculative science surrounding the subject, but a similar process is often used in reducing the surface tension of fertilisers, making them easier to absorb at a cellular level by plants. 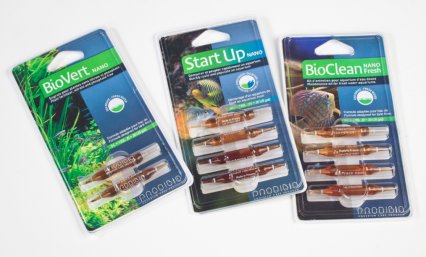 This range is well thought through. There are also a couple more products in circulation, inspired combinations of the above products. These are BioClean, which is a biodigest/biotrace, and Start Up, which is an ammo stop/biodigest combo.

The latter product makes a grand claim that I’d ignore, in that in freshwater tanks fish may be added a mere four hours after the additive. Of course, there’s much to factor in to that, but I’d still avoid doing so.