Freshwater fishes of the Arabian peninsula One wonders how often the customers of Kinokuniya, Dubai’s largest bookstore, have been looking in vain for a field guide on freshwater fishes of the Arabian Peninsula. Not that often, probably. But the UAE is a place where every need can be satisfied if the right person puts his mind to it.

Someone at the Environment & Protected Areas Authority of the Sharjah emirate wanted such a book, and enlisted the eminent ichthyologist Jörg Freyhof (I imagine). And so it happened that there now is a rather comprehensive, well-put-together and affordable guide which at least two of Dubai’s glamorous malls are stocked with, but Amazon is not.

Every book of this kind is dependent on its material. The Arabian Peninsula is not teeming with biodiversity at first sight, although plenty of birds nestle around Dubai’s hotel pools, drinking chlorine and eating leftover fries. But swimming pools do not sustain fish, so where could the 31 native freshwater fish species this guide boasts of live? The answer is: in mountain streams and wadis. The book is full of beautiful imagery of cool landscapes hard to imagine from the staggeringly hot city, yet
all of which can be found not so far away from it. In fact, the maps printed in this book show an unexpected, but intricate web of waterways throughout this infamously sandy peninsula. 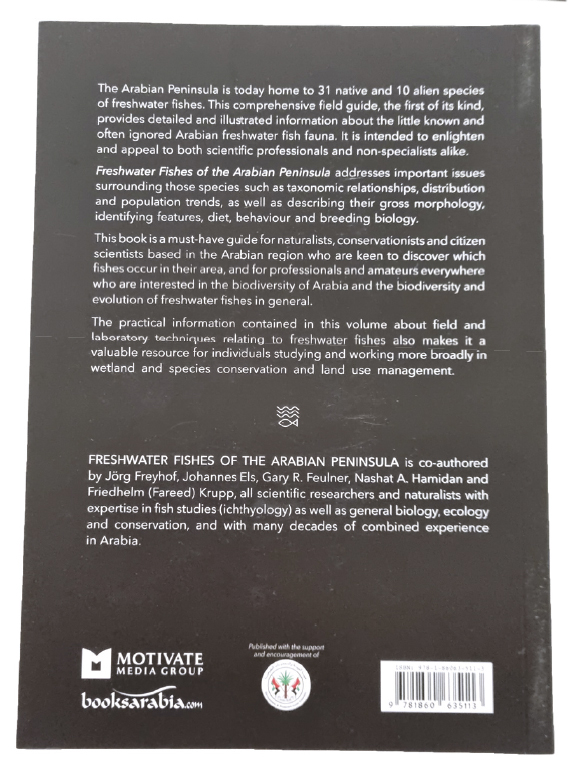 Obviously, a field guide covering 31 species could have, say, 50 pages and be quite complete.
Then again, Burj Khalifa could have had 50 storeys and be a quite impressive tower, but that’s not the style of the UAE. Burj Khalifa has 163 floors and this book counts 272 pages. It is heavy and glossy and takes a long run-up from methodology and taxonomy, through euthanising fish, to biogeography and photos of researchers in the field. Some interesting semi-relevant facts and factoids are mentioned along the way: an invasive population of tilapia can multiply from just 15 individuals to 1231 in half a year; to photograph nervous fish, it helps to ‘sing to them gently’.

Are these 31 native species of interest to our fishkeeping hobby? Two of them are eels; true eels, but not true freshwater fishes. Both species are catadromous, living in fresh and saline waters in different stages of their existence. These eels grow large, too. There is a little bream from the coastal mountains of Saudi Arabia, the survival of which is highly questionable.
There are some drab but efficiently streamlined carps, pond rather than aquarium fish, but surely not adaptable to European winters.

There is another genus of carp-like fish, the lotaks, of which the Hajar lotak from Oman, Cyprinion muscatense, would make a marvelous aquarium fish (Ed’s note: It’s on the ILFA White List of permitted species, so that’s a green light from me). The problem is that other than from this book, there is a complete lack of information available to the non-academic fish hobbyist.

About half the Arabian fish species are Garra. Garra are well known for being induced by starvation to eating tourists’ dead skin. (Which may be an exaggeration, since in one of the most beautiful and professionally run public aquariums of Europe — the Haus des Meeres in Vienna — they graze skin just as eagerly.) These small, companionable, energetic fish would be fun to maintain. I would especially recommend the colourful and comically-named Garra sharq. (For colour photographs of all fish mentioned, I refer to the book.)

The mullets and grunters should not count as freshwater fish, I think. The two species of goby are freshwater, and would make lovely inhabitants of an Arabic style hillstream set-up, if only they were available in the trade.

Then, to save the best for last: the Arabian killifish that so gracefully appears on the book’s cover. Aphanius kruppi seems to be restricted to the freshwaters of Oman and Yemen and was described only in 2017 by the author. The Aphanius courtship photos alone make this book a good buy.

I would not be surprised if Aphanius stoliczkanus is available from hobbyists and breeders — according to the text it is not rare and can manage various kinds of water (it’s euryhaline). I would presume this to be the most suitable and enjoyable potential aquarium fish of the Arabian Peninsula and look forward to reading more about it or getting the opportunity of keeping (and breeding) it myself.

All in all, the Arabian Peninsula hosts a modest array of freshwater fishes. It is quite an oversight on our Creator’s part that there should be no native cichlids in these lands. (Fossils have been found of Nile perch, but that’s it.) The fata morgana biotope replete with highly specialised desert oasis cichlids could have been quite a hit.

But if a field guide depends on the field, Freyhof and his co-authors certainly made the most of it, and enriched science and hobby alike with a very useful book which I think it is safe to say is now the standard work on Arabian freshwater fishes.