We at PFK have been following the rise of T5 lighting for some six years now and watched them change from niche status to more or less mainstream commodity for both fresh and salt water.

Lots of statistics got bandied around within that time, such as how many T8s they were equal to and how long they would last.

They were brighter than T8, so made hi-tech planted tanks and reef tanks much more achievable. For large reef tanks though, or the increasing number of reef tanks containing SPS corals, halide was still the definitive lighting method.

In the early days of T5, writes Jeremy Gay, I remember switching my halide for a T5 luminaire, only to look at the tank, disappointed with its lack of dazzle and drama, before reverting back to halide. My view was that T5s were great for the intermediate, but all the best reefs were still using halides.

In the six years since that launch, however, technology for T5 has galloped forward. Spectra have got better, choice of tubes has greatly increased and number of tubes used to get the best results has also gone up.

Of late I’ve witnessed the twin T5, plus reflector, tanks filled with mushroom corals and brown soft corals upgrade to LPS corals and even SPS corals with multiples of six, eight and even 12 tubes.

Being able to grow branching SPS corals like Acropora are for me the benchmark in marine lighting. If you have enough light for SPS growth you have bright lighting and that usually meant metal halide, and powerful at that — using 250 or 400w bulbs.

I’ve been witnessing what looks like a global change, however, as many of the world’s best reef tanks are changing to multiple T5. In fact I’ve seen a change in high end reefs in general. As calcium reactors make way for the Balling method, halides make way for T5 and aquascapes are made up of pastel-coloured Acropora.

ULNS and the Balling method are the new cool, and brands such as Grotech, Vortech, Korallen Zucht, Prodibio and the subject of this review, ATI, are getting bandied about on more and more marine forums. When we spoke to ATI distributor Empac Direct, and agreed to test them, I felt part of that cool movement!

So off I went to attempt to replicate the latest fashions with my Low Iron, rimless tank, Tunze pumps and skimmer and ATI 8 x T5 Power Module. The goal was to achieve a modern reef with modern kit, a modern aquascape and ultra modern SPS-only aquascape. Would the ATI light help me? Read on… 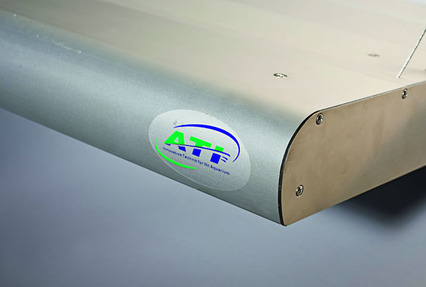 Multiple T5 units just look cool, even when turned off. And I’m not talking four tubes here — it’s six or more. I unpacked the supplied 8 x 39w Power Module and 6 x 39w Sunpower units in our office and turned them on. ‘Aaaaagh!’, shouted 50 fellow office workers nearby as the room was suddenly flooded in white and blue light. First impressions were that these units were bright — seriously bright. Don’t ever look at them directly when on.

Great I thought. That’s the ticket! I wanted as bright as could be for growing SPS corals. The units come without tubes fitted, so you can add those of your choice and make your own combination.

I went with ATI’s recommendations which Empac fitted and supplied for me. The ATI marine-only lighting range includes four tubes of note: Blue Plus, a blue tube; Aqua Blue Special, a blue/white tube; Actinic, a blue/purple tube; and Pro Colour, a pink, colour-enhancing tube.

Both the Sunpower and Power Module came fitted with a combination of these four tube types, providing a very interesting spectrum both bright and colour enhancing. The effect of all four could also be seen reflecting from the water surface, for added “hey look how many T5 tubes I have and their funny colours” pose factor. Both modules come with three cables, so that your actinic or blue tubes can be run on a separate timer.

Built-in cooling fans really make these multiple T5 units different, blowing cool atmospheric air inside the units and along the light tubes. ATI claim that the electronics are preserved, but the light tubes stay running at an optimum temperature, resulting in 15% better light output.

They also use individual reflectors; that is one light and one reflector (better than two lights sharing one reflector) and claim that each reflector provides 98% total light reflection, which itself gives an extra 10% total illumination from the units. 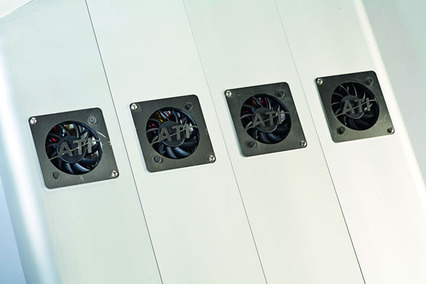 Of the models, the Power Module and Sunpower differ slightly in design and price. Both use fan cooling and ATI reflectors, both can only be ceiling suspended and have three power cables — one each for the main lights, actinic lights and fan cooling.

The Power Module is a more premium unit, with a smooth, curvy design and sturdy feel. The Sunpower is more economical in price and lighter in weight, though in terms of aesthetics I would be very happy to have either hanging above my tank. Both modules come only in a silver, aluminium finish.

The OT2 is waterproof and sits on your tank rim, though the Sunpower and Power module have fan cooling and individual reflectors. 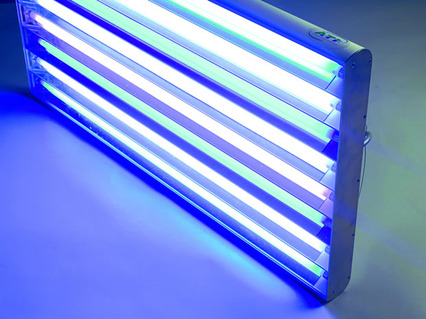 Any downsides? Well, as Technicolor as the hard coral aquascape looks, you don’t get the glitter lines as with metal halide or LED, though you make up for it in coral colour. Some say that with fluorescent lighting you don’t get the shading that point source metal halide or LED have, which some also claim leads to better coral shape when they grow – though that is currently unproven.

You can suspend T5 lights nearer the water surface than halides, which typically need 20cm/8” clearance or more. I’ve got mine 5cm/2” over the surface with little or no noticeable heat transfer, especially with the fans blowing cool air through the unit, and hot air exiting through vents at each end instead of along the length of the tubes.

Minor points to consider are the physical width of the units. They are only 60mm/2.4” high maximum, though if you opt for eight or ten tubes you will need a 60cm/24” wide tank to utilise them as they are in parallel and you don’t want a unit wider than the tank.

We also had a few niggles with the models on test, with the Sunpower light circuits failing after a day, then the fans failed too. After several months of testing the Power Module two of the light tubes, and presumably their circuit, started to play up.

However Empac provided immediate replacements and the pros of these units definitely outweigh the small cons with those somewhat random quality issues. We’ve spoken to Empac Direct and have agreed to continue testing, but will give you an update if there’s any more quality issues.