For the 14th year, Ryedale Aquarist Society held its open show and auction at the Old Malton Hall, Malton in North Yorkshire.

The show took place on on Sunday, May 18 with 39 classes of fish exhibited under Yorkshire Association of Aquarist Societies (YAAS) rules — in 'slab-sided tanks with a black base'. The RAS is a very social club and has its own exhibits too, such as the Eggshibit where juniors decorate a boiled egg to look like a fish!

There were 96 fish entries — but 33 of these were brought by Roy Chapman, all the way from Southend-on-Sea. Roy is a member of the Southend Leigh and District Aquarist Society, which will celebrate its 80th year in 2015. He is hoping for the winning maximum showing points in the year hence he brings his prize fish to many OS around the country.

It is no surprise that he was indeed the most-pointed winner at the Ryedale Show with many Firsts, such as this magnificent Blue lyretail killifish (Fundulopanchax gardneri), pictured above.

Best in Show with 87 plus one third point was the tiny Green rasbora (Microrasbora kubotai) — pictured at the top of the page. This was the first ever showing by the fish owned by Jim Haworth of CAS. 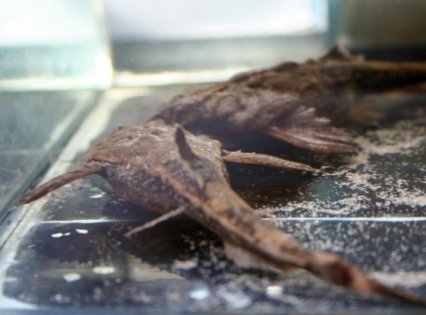 The Best Exhibit was won by the CAS Secretary, Steve Grant with a pair of Banjo catfish (Bunocephalus larai), one of the rarer species of Banjos. This was also a first-time exhibit for the fish — and it was difficult to photograph on the black base of the YAAS show tank!

The judging was by YAAS Judges Trish Jones, Trevor Douglas and Kevin Webb.

The auction lasted all afternoon with YAAS Auctioneer Steve Jones and an audience of some 60 aquarists.