Yangtze's aquatic ecosystem on the brink of collapse The aquatic ecosystem on the upper reaches of China's Yangtze River is near collapse, according to a recent report.

The building of hydropower stations is said to be one of the main causes, along with overfishing.

The Ministry of Agriculture’s Yangtze River Fishery Resources Management Committee office and WWF organised the 12-day study on the Upper Yangtze in June this year, focusing on the Tongtian, Jinsha and Chishui rivers.

The results are highly disturbing, with fish numbers in four major species shrinking from more than 30 billion in the 1950's to less than 100 million, and the number of fish species also showing a severe drop from 143 to just 17.

In addition, some species in the river such as the Finless porpoise, have already become extinct, according to Zhao Yimin, head of the Yangtze River Fishery Resources Committee. 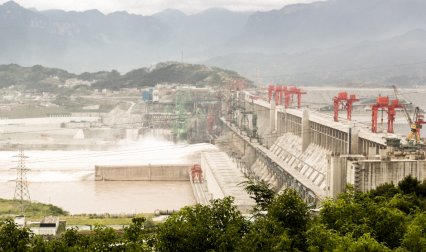 Twenty-five hydropower plants are planned on the Jinsha River, one of the major headwaters of the Yangtze. These will be built 100 km apart along the 2,308 km tributary of the Yangtze and together will supply power equivalent to four times that of China's enormous Three Gorges Dam project (pictured above) - the world's largest power station in terms of installed capacity (22,500 MW).

According to the report this will make the tributary to the Yangtze a series of reservoirs and disrupt the flow of sediment.

"It will cut the river into sections, and completely change the aquatic environment, bringing a devastating impact to species and water quality," Zhao says.

In order to repair the serious degradation of fishery resources, researchers suggest a ban on fishing along the whole of the river, but Zhao says this would be hard to implement as it would involve a lot of issues such as compensating those who make their living by fishing.