World's most luxurious hotel gives its aquarium a makeover Burj Al Arab's fish tanks are a captivating attraction for both guests and local visitors, with the resident marine biologists being highly commended for their great efforts in looking after its stock. Going beyond the standards usually found in commercial aquariums, Burj Al Arab has its own aquatic quarantine facilities, and these ensured the fish were kept in a perfect condition during the three-month refurbishment.

"We take extreme pride in nurturing our fish and providing as natural an environment as possible. Therefore we designed the best possible undersea 'home away from home' for our new and existing species", said Warren Baverstock, Burj Al Arab's Aquarium Operations Manager. "No live coral was used in the tank and the habitat was created to imitate natural coral reefs." 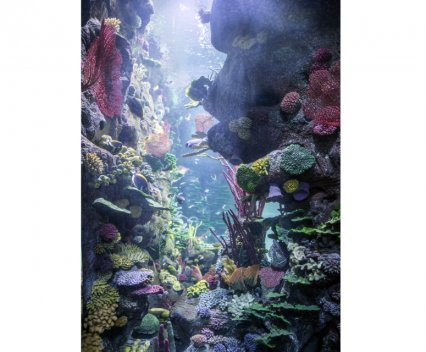 The ultimate undersea habitat is home to over 4,000 fish of over 50 species. They include Zebra and Bamboo sharks, clownfish, as well as Yellow and Powder blue tangs. It was created over a three month period by aquarium and zoo exhibit specialists Pangea Rocks in close collaboration with the aquarist team to finalise the project.

Burj Al Arab boasts three aquariums: two are located on either side of the hotel lobby and one is featured inside Burj Al Arab's award-winning seafood restaurant, Al Mahara.

Last year Burj Al Arab hit the headlines after pups were born to its zebra shark by a process known as pathogenesis, also known as virgin birth, for the fourth consecutive year.

A hotel of Jumeirah group, Burj Al Arab, has been one of the most photographed structures in the world and has been consistently voted the world's most luxurious hotel.