River Safari is a 12-hectare park featuring fish and other wildlife from eight of the world's major rivers: the Amazon, Mekong, Congo, Ganges, Mississippi, Nile, Yangtze and Murray.

One of the highlights is the Amazon Flooded Forest aquarium - the world's largest freshwater exhibit with a volume of 2,000 cubic metres (around 440,000 gal) and a viewing window which is 22 x 4m. This exhibit houses 18 different species of fish and animals, including Arapaima, piranha, river otters and manatee.

There are 300 species of animals on display at River Safari, of which 42 species are endangered. 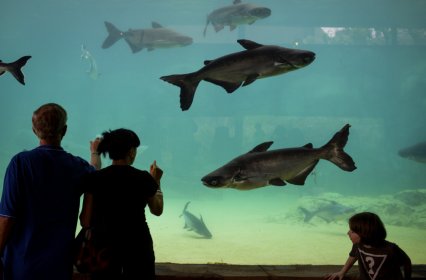 These include the Mekong Giant catfish, which can reach 3m in length. Only a few hundred of these huge fish are thought to remain in the wild. The specimens at the park were transported from a captive breeder in Thailand.

River Safari says it aims to create a greater awareness of freshwater habitat conservation by bringing visitors up close to fish such as this that are dependent on freshwater habitats. In addition, through captive breeding programmes, it hopes to contribute to the population of endangered freshwater species.

There are also reptiles and amphibians such as Indian gharial, Chinese alligators, Frog-faced softshell turtles and Giant salamanders.

Later this year the park hopes to open its much-anticipated boat ride attraction down a 483 metre-long man-made version of the Amazon river, past animals such as jaguar, giant anteaters and tapir. However, according to Mr Cham Tud Yinn of Wildlife Reserves Singapore, which owns the $160 million River Safari, adjustments are still needed - and the animals have to get used to boats going by, as most won't have ever encountered one before. Until the boat attraction opens, park tickets are being sold at a discounted price.