Just what is it? Is it really a fish? Some scientists would argue that it probably isn't, but for now it stays on the honorary fish list, irrespective of how much it looks like a leech.

The Sea lamprey (Petromyzon marinus) looks more like something from science fiction than the sea, and has been confusing taxonomists for years.

Lacking jaws, the animal instead relies on rings of rasping teeth to gnaw its way through the flanks of other fish, so that it can suck on the blood within. Not kept in check, they can become quite the pest, as has happened with several North American great lakes, where they blight fish farms and wild stocks alike.

They don’t even have bones, using a cartilage skeleton to support their bodies. Rows of gill slits live where most fish would have an operculum, and their bodies are devoid of a single scale.

Not all species of lamprey are parasitic, but those that are should be feared. Big and strong, reaching lengths of up to a metre, 40”, this is not the sort of parasite you can scrape off with a couple of flicks against the substrate. 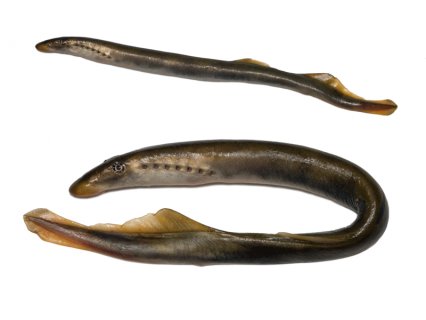 Unsurprisingly, this fish is not endangered, and for the gastronomically adventurous it is regarded as something of a delicacy in many countries.

Lamprey and chips, anyone?