This week's weird fish is surely one of the more odd species regularly offered for sale in the marine hobby, Monocentris japonica, commonly known as the Pinecone fish.

These spiky customers certainly live up to their common name with a body covered in large bony scutes, (plate-like scales), most of which are topped with ridges or spines.

Each of these armour plates is boldly edged in black which contrasts beautifully with their largely yellow body.

If this fearsome protective covering fails to ward off the unwanted attentions of any hungry passing predators then the fish is also equipped with enlarged, lockable dorsal and pelvic fin spines to stick in the throat of anything foolhardy enough to try swallowing them.

These fish are largely nocturnal which helps explain another weird thing about them – two bioluminescent light organs,(photophores) on either side of their chin. This light is produced with the aid of a symbiotic bacteria within the photophore and it is believed to help attract zooplankton which make up much of their diet.

They are a shoaling species and it has also been suggested that the light may act as a form of communication between the fish.

Found largely in the sublittoral zone, (the area of sea where sunlight can reach the ocean floor) they spend the day in caves or under ledges and rocky overhangs of reefs, waiting for darkness to fall when they venture out in search of food.

Growing to around 17cm/6.5in, they are found in the Indo-West Pacific from South Africa and the Red Sea eastwards as far as Australia and New Zealand. 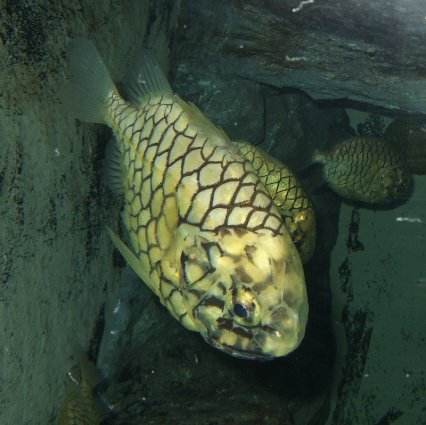 As an aquarium subject they are generally considered difficult to maintain long term, with a large percentage believed to perish before they even reach the hobbyist due to poor handling and lack of appropriate food among other issues.

Another similar species is also sometimes imported, the closely related but larger Pineapple fish, Cleidopus gloriamaris which, besides its greater size, can be distinguished from M.japonica by having a blunt, more rounded snout.