Cryptic camouflage is often the reason for fish looking 'weird', especially when they are removed from the habitat they are evolved to blend into. Take the Halimeda ghost pipefish, Solenostomus halimeda, as a case in point.

In an aquarium devoid of the algae it takes the second part of its scientific name from, this fish stands out like Whale shark in a Biorb, but in among a growth of cactus algae it is a near perfect match and extremely hard to spot.

Its disguise is so precise that it even mimics the white calcareous dead patches on the plant as well as filamentous algae strands sometimes found growing on the Halimeda algae itself! 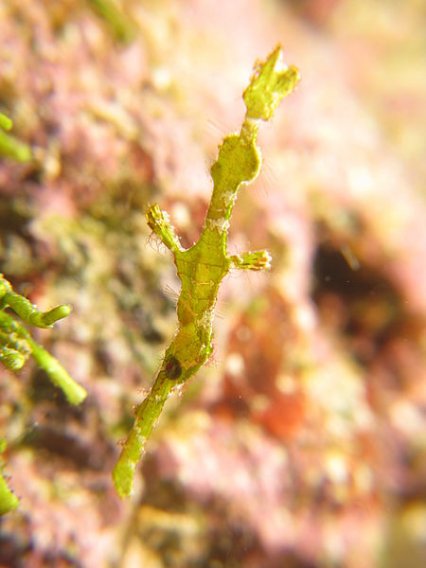 From the order Syngnathiformes, these strange looking fish are relatives of the seahorses and pipefish and share many similar characteristics – an elongated head, (which in this fish is over half its total length), hardened bony body and generally un-fishlike appearance.

They spend most of their lives hidden within large growths of their algal namesake, sucking up any suitably sized passing copepods. Growing to little more than 5cm/2in, the mothers are good parents, carrying fertilised eggs between their pelvic fins that are modified to form a brood pouch until they are ready to hatch.

The newly hatched fry are themselves camouflaged to blend in with their algal nursery, with extended dorsal filaments and a more transparent body to blend in with some of the other algae living alongside the Halimeda.

First described to science in 2002, it is found throughout the tropical Indo-West Pacific.

We found the following video of the fish, which you may find interesting.