You don't have to plunge to the depths of the deep ocean to discover weird fish. Some of them - like the Four-eyed fish - are literally bobbing about on the surface, being peculiar!

The Four-eyed fish (Anableps anableps) is clearly a bit of an curiosity, but has gained its odd ocular arrangement through millions of years of evolution rather than the result of swimming around the outflow of a nuclear power station.

Despite its common name it only has two eyes, albeit two highly developed ones that give the fish many of the advantages that having four eyes might offer. They are typically found on the water's surface where the tops of their bulbous eyes protrude, giving them an excellent view of potential aerial predators as well as allowing them to spot terrestrial insect prey which makes up the majority of their diet.

Their scientific name alludes to this, meaning "to look up" in Greek. 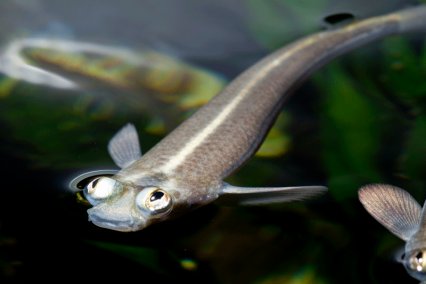 Naturally this upward-looking advantage would leave them with a major blind-spot to the many predators that might fancy a fish supper that lurk below the surface and this is where evolution has carried out a piece of economical brilliance.

Rather than actually developing another set, the fish's existing large eye has been split lengthwise to form two pupils that can see above and below the water at the same time with the lens changing thickness from top to bottom to allow for the differing requirements of seeing in air and water.

Using this all-seeing advantage, large shoals of Four-eyed fish can be seen patrolling rivers, brackish lagoons and mangrove forests in search of food, sometimes following in small waves up the beach to snatch up prey. They are hardy fish that are able to adapt from freshwater, to brackish and marine conditions and can survive out of water for extended periods as long as they don't dry out completely.

They are a livebearing species related to guppies and mollies, being a member of the order Cyprinodontiformes.

Pregnant females have a long gestation period of around three months after which they give birth typically to around 10-15 young of around 4cm long.

Adult females grow to around 30cm/12" long, with males a little smaller.

They are resident in South America from Trinidad and Venezuela to the Amazon delta in Brazil.

There are two other species: A.microlepis which has a similar distribution but tend to be found in smaller shoals or pairs and A.dowei which is found in the Pacific drainages from Mexico to Nicaragua.

Check out the video below: