Fish that can walk and forage with their fins? This week's weird fish is sometimes to be found off our coast here in the UK: Dactylopterus volitans, more commonly known as the Flying gurnard. Check out the video!

The first thing to clear up is its name. Despite both common and scientific names suggesting otherwise, ('volitans' deriving from the Greek for flying) these fish cannot fly, or even glide. The purpose of their extravagantly enlarged pectoral fins seems largely to be as a defence mechanism. When disturbed they extend the fins, which are edged with bright blue, outwards and this display startles and confuses would be predators.

The weirdest thing about these odd fish though is their way of moving about and feeding. Rather than swimming they prefer to use adapted pelvic fins to 'walk' along the seabed in search of food.

The oddness continues as their prey of crabs, shrimp, other small crustaceans and fish are found with the use of two specially adapted parts of the pectoral fins, which have formed into what look almost like two hands.

The fish uses these to prod and poke about on the sea floor, pushing aside seaweed and pebbles, and washing away sand in an attempt to disturb and uncover any potential food which is quickly snapped up by the hungry fish. See all this in action in the video below:

These peculiar fin adaptations explain the first part of their scientific name which derives from the Greek words for 'finger' and 'fin'. They are capable of swimming in a more normal manner with their oversized pectorals folded neatly away, and do possess a swimbladder to help with this, unlike many 'walking' fish species.

Like the true gurnards or sea robins, the Flying gurnard can make a drumming sound by hitting their swimbladder – whether this noise-making capability is another method of startling predators, or for communicating with other Flying gurnards is unknown.

They are well protected fish, whose body is covered in large, scute-like scales while the bones of the head have formed a tough helmet. 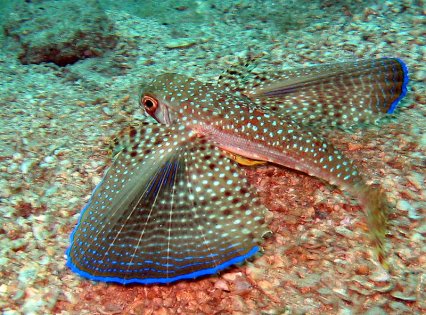 These defensive measures make the Flying gurnard a surprisingly bold species, unconcerned by approaching divers, some of whom have reported the fish suddenly turning and ramming into them with their bony armour if their warning display is ignored.

Growing to around 50cm/20in, they are found throughout the Atlantic, as well as the English Channel, Mediterranean and Gulf of Mexico.