On first inspection the Cookie cutter (Isistius brasiliensis) looks an unlikely terror of the deep, but looks can be deceptive!

Cruising through the moonlit sea, a tuna spots the tell tale shape of a small fish silhouetted against the oceans surface and moves in for an easy meal. What happens next isnít exactly what it expected. At the last moment the predator's meal disappears and suddenly it's more a case of 'the biter bit' as something small and toothy clamps onto its side, bites hard, spins and disappears into the night leaving it with an empty stomach and a nasty circular wound on its side. 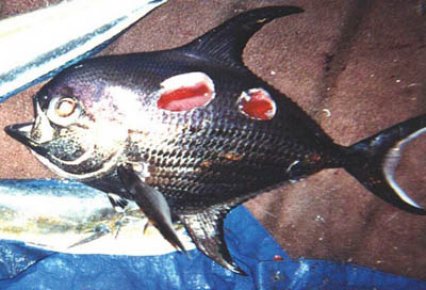 This scenario plays out time after time, with whales, dolphins, sharks and seals as well as fish the unwitting dupes of a weird but effective feeding strategy that makes Isistius brasiliensis a success across most of the world's oceans.

Growing to around 50cm/19in long, the Cookie cutter shark's cigar-shaped body has greatly reduced finnage other than its tail - this is no ocean cruiser - it is adapted for a short explosive burst to latch onto its victim.

The disappearing trick it uses to attract its prey is thanks to what is thought to be a unique use of bioluminescence in a predatory fish.

The Cookie cutter's belly is covered in photophores apart from on a small dark 'collar' under the fishes' gills. It is speculated that using 'counter-illumination', (matching its light output to the light penetrating from the sea's surface) the fish becomes invisible apart from the dark collar which appears to be a small fish to any would-be predator lurking below.

They are believed to swim at different levels in the water column to compensate for the ever-changing light levels above them. The shark's fearsome dentition, (the largest in comparison to its size of any shark) rapidly removes a bite sized chunk of its victim with the smaller upper jaw teeth gaining purchase while the larger lower teeth slice through flesh.

The mouth itself is modified to form a suction cup to gain further grip. Occasionally Cookie cutters have been known to bite off more than they can chew. Attacks by them on the neoprene covered sonar domes and electric cabling of US submarines caused several subs to need emergency repairs and the installation of fibre glass covers in the 1970s and 80s.

They are considered facultative ectoparasites as they are also known to eat smaller prey such as squid completely. Related to dogfish, they are ovoviviparous, giving birth to litters of 6 to 12 pups which are around 15cm/6in long.