We got him! Takashi Amano comes to Practical Fishkeeping! Takashi Amano, the global aquascaping guru, creator of the Nature Aquarium and owner of Aqua Design Amano (ADA) is to publish articles on plants and aquascaping in PFK magazine.

Takashi Amano is one of the biggest names ever in the hobby, and few if any have made such a difference to the way we set up aquariums, and have been so influential.

"I'm absolutely delighted that Mr Amano's articles will be available to the people who read Practical Fishkeeping," said editor Jeremy Gay. "I've wanted Amano in PFK since I first got my hands on his book Nature Aquarium World in 1994."

"He has completely changed the way we grow plants and arrange decor in freshwater aquariums, and I've never seen anyone with such a large and dedicated following of enthusiasts around the world." 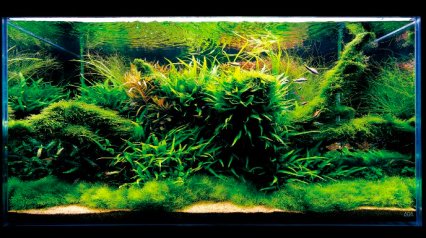 The story of the nature aquarium
Born in Niigata, Japan in 1954, Mr Amano is an award-winning photographer who bought Zen rock arrangement techniques and the use of carpeting plants to the aquarium world.

He was actually creating what we now know as nature aquariums as long ago as 1982, using plants, rocks and wood to create underwater landscapes, and in a style of aquarium decorating that had never been seen before.

The master of scale, detail and replicating scenes from nature, Amano did things his own way and even created his own range of equipment in order for others to create aquascapes like he did.

He made the use of plants such as Glossostigma elatinoides and Riccia fluitans mainstream, along with aquatic soil, beautifully crafted glass filter pipework and ultra clear, low iron glass aquariums.

Tanks and equipment were designed to disappear once aquascaped, serving to enhance the viewing experience, not detract from it.

First to use the shrimp, Caridina multidentata to control algae growth in aquaria, many hobbyists now refer to the shrimp as the "Amano shrimp" and arguably the whole popularity in freshwater shrimp that we now enjoy is down to him, with all his aquascapes shown off so beautifully by his world-class photography.

Every aquascape Amano creates is documented in his series of Nature aquarium books and aquascaping magazines – Aquajournal – where he shows step-by-step set ups, and details all the plants, fish and equipment used in each aquarium. 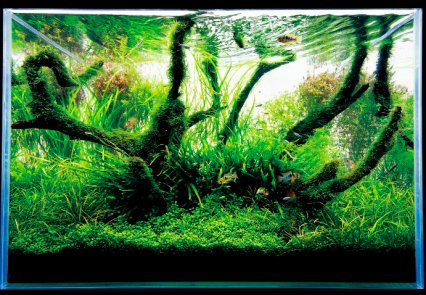 The International Aquatic Plant Layout contest (IAPLC)
Aquascaping is now so popular that Amano created the IAPLC, a contest where contestants take part from around the world by sending in photos of their aquascapes.

The 2012 competition winner will take home one million Japanese yen in prize money, and the 2011 competition received 1603 entries from 55 countries.

Competition is fierce, with the top ranking tanks being absolutely spectacular. It's such a big deal that the contest makes it onto Japanese TV news channels, and the results are hotly anticipated each year.

Anyone can enter the IAPLC, so why not be inspired by his articles, photography and techniques and have a go yourself?

We'll bring you more news on Takashi Amano over the next few weeks, along with releasing which issue will contain the first of his articles.