We are amateurs - and we should be proud! We are amateurs - and we should be proud!

Are you a serious aquarist? Are you amateur? Are you professional? Nathan Hill thinks we should be proud of whatever we are, but not make out we're something more!

I’ve had an interesting week, with much to feed my hunger for thinking. I’ve had a whole host of communication with an abundance of readers, some complimentary, some critical. But in all of my emails and letters, one word repeatedly seemed to launch itself off of the page, leaping out to punch me with its Times New Roman fists. That word was serious. I’m serious.

The word seems innocuous enough. Just seven letters, seven little bits of shaped syntax, which when put together create a little semantic clause. Apparently I don’t consider the needs of the serious aquarist.

Well this got me to pondering, as I wiped the last of the aggressive little morpheme from my cheeks. Just what is serious? How is one a serious aquarist? How does one gain this accolade?

What I know of the word ‘serious’ is closer to sombre. Serious to me is the face that I put on when I’m trying to impress intellectual poets. I sit with my tank top and pipe, supping at timely intervals from a cup of chai, nodding as though I understand them.

Of course, one of the dictionary definitions of serious is ‘deeply interested or devoted.’ Bang on, I say. To an extent. That makes me incredibly serious about Cuban cigars, Wild Turkey, and the writing of James Kelman.

Why is it so important to be considered serious? I know another word that encapsulates being deeply devoted or hyper-mega interested in something. That word is amateur.

A great definition for amateur actually encapsulates more about what most of we aquanauts do in our hobby. Way more so than ‘serious’, in fact. 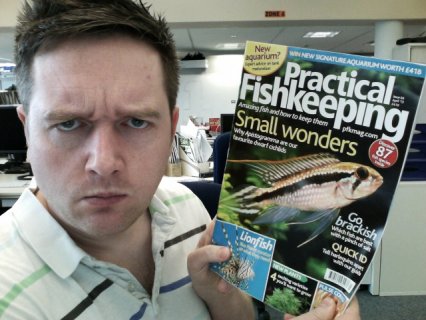 Above: Serious enough yet?

An amateur is a person who is devoted to a subject (be it science, art, Characins, Cuban cigars, Wild Turkey, or whatever) in a non-professional, unpaid sense. Furthermore, and this is where the definition really gains a bit of momentum, amateurs are usually self-taught. Indeed, one factor for being an amateur is to have very little or absolutely no formal training in the subject being pursued.

Oh my. That all sounds a little closer to what we do, if you ask me. Which you’re doing, if you’re reading my blog.

So why do some people want to move themselves out of the amateur camp, away from those self taught wretches, and try to be one of the serious crowd. Do the serious crowd have cake? Or Wild Turkey? Surely we amateurs can invest in some, try to get some of those deserters back.

There’s nothing shameful about being amateur. Some of the greatest discoveries have been made by amateurs. Charles Darwin was an amateur scientist, and look what he achieved. Mary Anning was another. Gregor Mendel, William Herschel, Michael Faraday. The list really goes on. Don’t be embarrassed, amateurs, you’re in good company.

Even I don’t ascribe myself as serious, and I’m supposedly a professional. By professional, I mean I’m paid to work in my specialist field. I’ve had formal training. But when it comes to my fishy passions, I’m as amateur as the next man, woman, child, or self aware computer.

Give me a Corydoras, and I’ve never had formal training. I’ve written about the things, bred them, loved them as far as was legal, but as far as my knowledge goes, I’ve had no official Cory training. I tried printing off a Doctorate in Callichthydae, but got rumbled when people realized I’d just made it up. I was lucky they didn’t fire me out of a cannon. Into the sun. Screaming.

There is, I think, something inherently egotistical about branding oneself as serious over amateur. I’m sure I’ve used the word pertaining to myself in passing, most likely in some colloquial sense. I’d implore my critics to trawl my articles, find where I’ve used the phrase, and rub my smug chops in it, because I can’t be bothered to go back through it all myself. 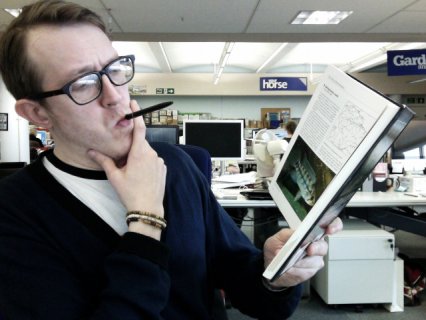 Above: You can't be serious.

To me, there are very few ‘serious’ aquarists out there, and frankly, I’m still confused as to how to exactly define the term. I think I want to lash it to something that means productive, influential, and progressive. I think Heiko Bleher would fit into what I’d class as serious. Ad Konings would tick my boxes. Ivan Mikolji, too. There are quite a lot, in fact, that I think I could run up to, hug, and surreptitiously place a note on their back with sellotape that says ‘serious’ on it. But even here, I think I just have some neurological muddle that’s blurring my boundaries between professional and serious.

Still, I think it remains that the hobbyist setting up a tank to breed some obscure cichlid or seahorse still remains amateur. And I’ll tell you what, I’m happy to be a part of that club. Amateur and proud.

As a closing thought, I wonder if it’s the case that the word amateur has negative connotations about it in some circles. The word is often used to describe something shoddy or rubbish, but that’s only by people who don’t understand the true definition. To hell with them. If they can’t be bothered to get the right definition, then ignore them.

So, the next time you hear the term come up, and someone describes themselves as serious, question their credentials. I’ll bet you anything that the qualifiers they give you sit firmly in the realms of amateur.

I’m open to feedback on this, too. If you think you warrant a ‘serious’ attribution, then go ahead, tell me why below. Let me know how it differs from what I’ve described above. Be careful with your catch-all. Too loose a definition suddenly makes us all serious aquarists.

And I’ve just remembered where I’ve used the word serious myself. I mentioned it several times a while back when I talked of doing my first ‘serious’ aquascape.

What on earth was I harping on about? Seriously?