Video: Virtual aquarium where the fish will play with you! This new interactive aquarium features everything from tiny clownfish to huge whale sharks â€” and the fish will even follow you about! 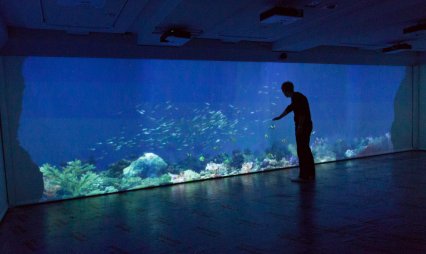 There are a number of highly-detailed scenes to enjoy:

In the "Coral Reef", giant sea turtles swim through an azure water accompanied by schools of tropical fish that appear from the corals to playfully follow the viewers.

"Deep Blue" simulates marine life at a greater depth, where a number of different shark species circle continuously while the viewers can generate bubbles within the otherwise pristine ocean.

There are also two night scenes: "Tuna", in which large school of tuna glide perpetually through the tank, revealed interactively by a virtual light source projected by the participant. And in "Jelly Fish", an even more surreal and tranquil scene of various jellies mingle playfully with the animated phosphorescent particles that flow freely along with the movement of the viewers. 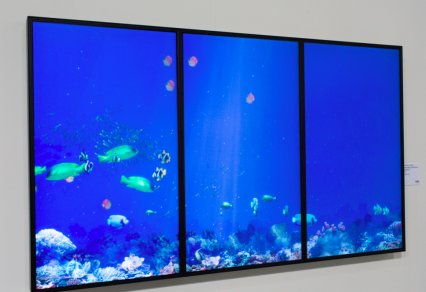 The Interactive Aquarium is the work of Dominic Harris and London-based Cinimod Studio, which says: "All the scenes have a highly detailed realism to them, and yet on closer inspection one discovers a playful tweaking of nature happening. While in real life the fish tend to flee humans, in the Interactive Aquarium they are actively attracted – and appear to make little performances to the amusement and astonishment of an otherwise unsuspecting viewer."

You can see more in the video below: