Two stunning species of vampire crabs, which have been kept by hobbyists for a decade or more, have finally been described.

One of the problems researchers faced was that although these mainly terrestrial crabs are seen for sale in aquatic shops, it wasn't clear where they originated from, with dealers claiming they came from Sulawesi, Java, Krakatau or Riau Islands.

However, it has finally been established that the crabs, which get their common name from their 'spooky' colours and appearance, are native to central Java in Indonesia. 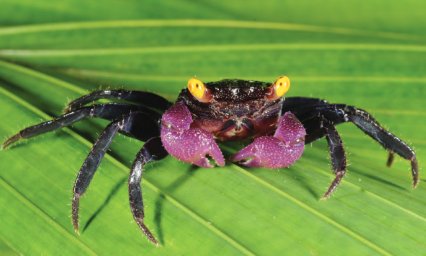 The crabs have been named Geosesarma hagen (pictured at the top of the page) and G. dennerle (above) after the two aquatic companies that sponsored the expedition to Java by crustacean expert Chris Lukhaup, who co-authored the study alongside Peter Ng and Christoph Schubart.