Two species of Baryancistrus plecs popular in the aquarium trade have finally been formally named in the most recent issue of the journal Neotropical Ichthyology.

Lúcia Py-Daniel, Jansen Zuanon and Renildo de Oliveira name Baryancistrus xanthellus and B. chrysolomus from the Xingu River drainage, distinguishing them from congeners chiefly by their colour pattern.

Baryancistrus xanthellus
This species is known in the aquarium trade as the Gold nugget plec, and has been given three L-numbers (L18, L85 and L177).

It is distinguished from other Baryancistrus species in having a broad light band on the edges of the dorsal and caudal fin in juveniles that becomes a small dot on the tips of these fins in adults.

It also differs from all congeners except B. niveatus and B. longipinnis by the presence of pale spots on the whole body, from B. demantoides, B. longipinnis, and B. niveatus in having a naked abdomen and from B. beggini in having more teeth in the upper and lower jaws.

According to the authors, young B. xanthellus aggregate under flat rocks at the bottom of shallow rapid stretches of rivers.

An analysis of gut contents revealed a diet comprised primarily of algae, which the fish scrape off the surface of submerged rocks.

This species is named after its bright yellow spots (Greek xanthellus=yellow). 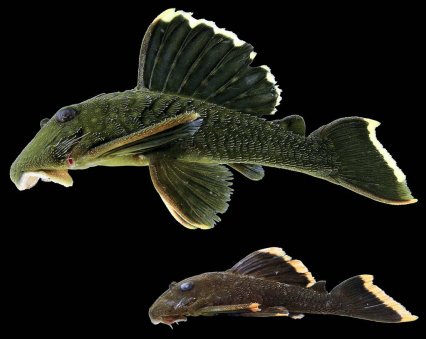 This species is known in the aquarium trade as both the Mango plec and L47.

It is distinguished from other congeners except B. xanthellus in having a broad orange to yellow band along the entire outer margin of the dorsal and caudal fins.

It can be further distinguished from B. beggini in having more teeth in the upper and lower jaws.

Unlike B. xanthellus, young of this species were found under rocks in places with slow to moderate flowing water, usually with sediment accumulation over the rocks and river bottom.

The diet of this species is very similar to that of B. xanthellus (algae scraped from rocks).

This species is named after the yellow margin on the fins (Greek chrysos=yellow and loma=border).