Two new species of Pseudanthias have been described, one from the Maldives and the other from Mauritius.

The genus Pseudanthias belongs to the subfamily Anthiinae of the family Serranidae and contains small, colourful coral fishes, usually seen in shoals.

They are found on reefs in the Indo-Pacific, where they feed on zooplankton in open water but take refuge in the reef when danger threatens.

They are sexually dimorphic, with males larger and more colourful. Males maintain a harem, and if the harem-owner is lost the dominant female eventually changes sex and takes over the harem.

Hitherto 65 species have been described, with 49 regarded as valid. The total has now been increased with the description of the two new species, both closely related to P. parvirostris from Indonesia, the Solomon Islands, and Palau.

The first species, Pseudanthias bimarginatus (pictured above) comes from the Maldives (Indian Ocean) and was originally thought to represent a population of P. parvirostris, but differences in the coloration of the tail prompted examination of its morphometrics and differences were then found, significant enough to denote a distinct species.

The Latin name bimarginatus translates as “two-margined” and refers to the most conspicuous feature of the species’ coloration, the broad, lavender-blue, upper and lower margins of the tail.  The largest specimen in the type series, the male holotype, measured 4.8cm/just under 2”). 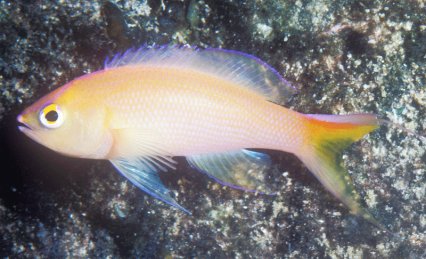 The second new species, Pseudanthias unimarginatus (above), comes from the island of Mauritius, again in the Indian Ocean.

In this species only the upper edge of the caudal fin has a broad, colourful margin, and hence it is named unimarginatus meaning “one-margined”.  To date it is known from only a single specimen, a male measuring 5.26cm/just over 2", collected in 53 metres of depth by the author of the description and another diver.

The habitat was rock with little live coral. The author comments that more specimens are required to confirm some elements of the description, but there is no doubt that the fish is a distinct species.