Two new species of Corydoras catfish have been recently described from northwestern Argentina.

Both species are most closely related to C. micracanthus, which is also redescribed in the study.

Corydoras gladysae is distinguished from congeners in having a very short dorsal- (7.6–10.6% standard length) and pectoral-fin spine (11.9–17.4% standard length), and a slightly emarginated caudal fin.

In addition, Corydoras gladysae can be differentiated from other species of the genus by the following combination of features: 24–25 dorsolateral body plates; 21–22 ventrolateral body plates; small eye (7.3–12.5% head length) located dorsolaterally on the head; dorsal fin rounded, of very low height in males and females (average 18.1% standard length); body depth 29.0–35.7% standard length; triangular and elongate posterior expansion of the parieto-supraoccipital process; predorsal plate separated by one or two dorsolateral body plates; trunk and head covered by a thin skin, with tiny dispersed odontodes and caudal fin with four or five series of small dark brown blotches restricted to the fin-rays, forming a poorly defined pattern of vertical stripes.

Currently known only from the Calchaquí River, this species is named after Argentinean ichthyologist Gladys Ana María Monasterio de Gonzo, who first collected this species.

According to the authors, this species lives in fast-flowing areas, where it hides amongst rocks. The pH of the habitat was about 8.0. 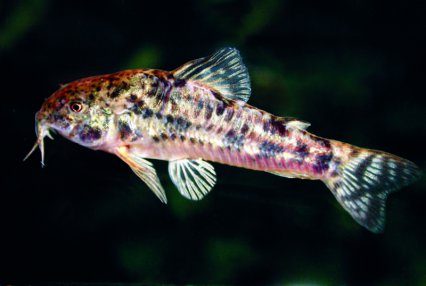 This species is named after Argentinean aquarist Roberto Petracini.