Cameroon is home to a number of interesting cichlid and other fishes by virtue of the existence of a number of small isolated lakes which have evolved endemic populations, the best-known being Barombi mbo.

Scientists have now described two new Sarotherodon species from Lake Ejagham, following sampling and field observations carried out during three visits, two in the dry season and one in the rainy period.

Lake Ejagham is a very small oval lake with a maximum depth of 18m, which lies in the Cross River basin and is currently isolated from the nearby Munaya River by a waterfall several metres high.

Unlike most other lakes in the area, it is not a volcanic crater lake. Most of the bottom is covered with mud with some exposed sand, and there is vegetation in near-shore areas. Other fishes include several endemic Tilapia (Coptodon) species, a killifish (Fundulopanchax gardneri lacustre), a poeciliid (Procatopus aberrans), and a cyprinid (Barbus cf. callipterus).

Sarotherodon knauerae (pictured above)
This new species is one of the smallest known Sarotherodon, with a maximum recorded size of only 75.2 mm (around 3") in adult males. Males are normally golden, sometimes with a metallic golden-green sheen and irregular dark blotches or dots representing residues of juvenile striping. Breeding males have black on the underside of the head and body.  Females are light grey with a metallic bluish-golden iridescence on the flanks.

Sarotherodon knauerae is a gregarious, predominantly bottom-dwelling cichlid and appears to be commonest in relatively shallow water close to the shore. It is a detritivore that feeds from soft and hard substrates and from the water’s surface. The species is a maternal mouthbrooder, thought to breed mainly during the rainy season (August-September) but spawning and brood care have not been observed in the field.

The species is named in honour of Mrs. Barbara Knauer, formerly of the Max Planck Institute in Seewiesen. 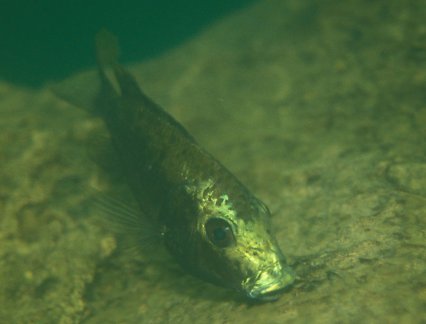 Sarotherodon lamprechti (above, pic by U. Schliewen)
This species possesses an unusual prognathous (protruding) lower jaw, which clearly distinguishes it from the sympatric sibling species S. knauerae. Males are normally golden, becoming blackish ventrally with blotchy dark brown above the lateral line when breeding. Females are golden-grey, with gold iridescence on the flanks, and sometimes 8-9 narrow lateral stripes. Juveniles exhibit 9-10 narrow vertical stripes.

This cichlid feeds on pelagic plankton and forms large groups in open water or on the bottom during the main breeding season (August - September). It is a maternal mouth-brooder. Breeding males excavate shallow spawning pits and defend territories against neighbouring males.

The species is named in honour of Jürg Lamprecht (1941–2000), again formerly of the Max Planck Institute.

Both species belong to the Sarotherodon galilaeus assemblage within the genus, which, as currently understood, inhabits a vast area of northern and western Africa and the Levant.  There are many unanswered questions about the systematics of the group, but it is, however, quite clear – from statistical, morphometric, and DNA studies - that the two new species are closely related but distinct from each other, from S. galilaeus, and from other members of the assemblage found in the adjacent area.

It is thought that the two species probably evolved sympatrically in the lake, but it cannot be ruled out that they evolved elsewhere and subsequently colonised their current habitat. Sympatric speciation is unusual but appears to have occurred in several isolated Cameroon lakes, and the two new species should offer an additional useful study pair for further research on the subject.

Both species are being bred in captivity in Germany.